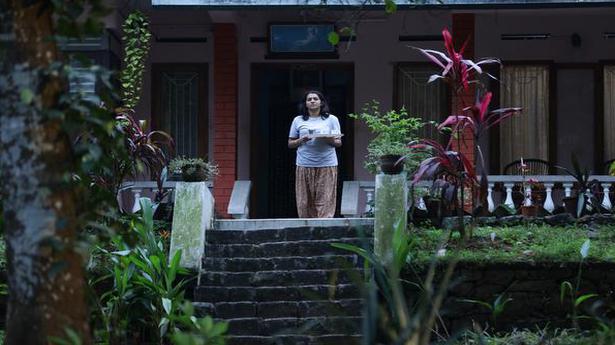 With several restrictions in place, filmmakers made most of the locations and came up with interesting narratives

During lockdown, Malayalam cinema came up with interesting narratives despite working within several constraints to adhere to COVID-19 protocol. Moreover, scripts were worked out in such a way that locations held centre-stage in films.

It all began with director Mahesh Narayanan and Fahadh Faasil teaming up to tell a story through screens. Their C U Soon was primarily shot inside two flats, both of which belong to Fahadh, at an apartment complex in Kochi. The team rented out four more flats in the same building for the cast and crew to stay.

“I had to finalise the location to write the story. It was more or less a home-made movie. There were 15 of us multi-tasking on the set. It felt strange for I and Fahadh because we had just finished the shoot of Malik in which we had at least 175 to 200 people on a day and went up 2500 for certain scenes,” says Mahesh. Once the Kerala Government allowed 50-member crews, they shot sequences in a five star hotel and a hospital in Kochi.

The story of The Great Indian Kitchen — filmmaker Jeo Baby’s breakout movie — unfolded in the kitchen of a house at Elathoor in Kozhikode.

“Our chief associate director Nidhin Panicker came up with this house; it turned out to be better than what I had in mind. The kitchen, which was the highlight of the story, was big enough for the shooting. Some alterations had to be made, like we installed a tap and a sink in the kitchen,” says Jeo. His 20-member crew wrapped up the film’s shoot on this location in 27 days. Midhunam and Indian Rupee are among other Malayalam movies shot here.

The crew of Khalid Rahman’s Love did not have it easy. The film’s narrative was set inside a flat and no one was ready to give one for the shoot, according to the film’s producer Ashiq Usman. He adds, “I have some flats where I usually put up the team for my projects. But residents associations prevented me from even entering those flats.”

It was Nissam Basheer (director of Kettyolaanu Ente Malakha) who came to his rescue; Basheer suggested using a small apartment complex with two floors at Maradu in Kochi. “Since it was vacant, we took the entire building,” Usman says. With a team of less than 30 people, filming was wrapped up in 24 days.

It was more like a homecoming for the team of Drishyam 2 as they went back to the same house at Vazhithala, near Thodupuzha in Idukki district, where the first part was shot. “The owners had already done some extension work, and so we didn’t go for any modification,” says Jeethu Joseph. However, the house in the backyard, an important ‘character’ in the movie, was a set.

Mohanlal and Meena in a still from ‘Drishyam 2’. It was the same house near Thodupuzha where its first part was shot

“Although the owners of the property were about to start pineapple cultivation, they were ready to postpone it by a few months when we requested them,” Jeethu adds. Rajakkad junction was made from scratch. Kaippukavala, a sleepy locality that had just one building, was converted into a bustling area with police station, shops and business establishments. The film’s Telugu remake too has been shot here.

A team that had a tough time was that of Aarkkariyam, directed by Sanu John Varughese. “The movie is primarily set in the house of Ittiyavara (Biju Menon), and we saw over 25 houses in Kottayam district before we found the one at Thidanad near Erattupetta,” says Arun C Thampi, executive producer. Sanu was particular that the house had to be situated on five or six acres of land, but it should neither be a mansion nor a traditional house.

The house near Erattupetta where ‘Aarkkariyam’ was shot

“His specification was that it had to look like the house of a retired school teacher… fairly old, but with some modification work done,” says Arun. Some scenes were shot in Kochi. “With several restrictions in place, we had to work without a break. The Kochi schedule, which was the last day of the shoot, went on for 26 hours!” he adds.

A location that became a hit with vloggers is the sprawling house in Dileesh Pothan’s Joji; the house is located near Erumeli in Pathanamthitta district.

The house near Erumeli in Pathanamthitta district where ‘Joji’ was shot

Actor Unnimaya Prasad, who is also the film’s executive producer — Joji’s writer is her husband Syam Pushkaran — says: “It was the first and last house we had checked out. Syam had specifically written in the script that the house, standing amidst a rubber plantation, ought to be built in the ‘90s; and that it should have a terrace. We thought it would be difficult. But our line producer Jayesh Thamban, who hails from Erumeli, found it for us. We were happy with the interiors as well. We did go for some modifications,” says Unnimaya.

Since the pond mentioned in the script was not there, the team made one. “The owner’s uncle’s house in the same compound is shown as the priest’s (Basil Joseph) house. Thus, everything fell in place,” she adds.