Sharing ‘Nonbu Kanji’ during Ramzan: Gruel for the fasting soul 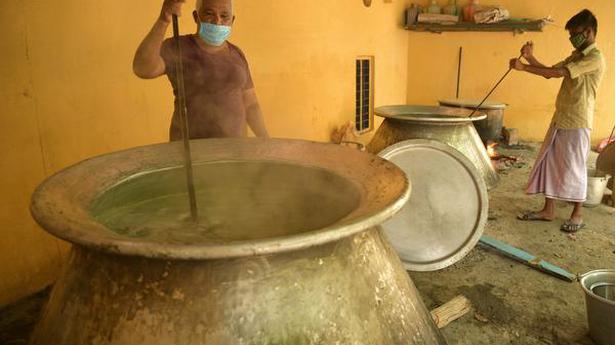 Slow-cooked in huge cauldrons, the rice-based nonbu kanji is an integral part of iftar meals, distributed to those in need during Ramzan

A fortnight into Ramzan, the Islamic month of fasting, cooks and caterers have been busy preparing nonbu kanji, a nutritious slow-cooked gruel made from rice and other grains across southern India. The gruel is an integral part of the fast-breaking meal (iftar) among South Indian Muslims. For decades, mosques and other religious institutions have involved the local community in preparing and distributing the gruel to anyone who asks for it.

While last year’s lockdown saw a complete closure of Ramzan activities in mosques, this year, many institutions in Tamil Nadu have opted to resume serving nonbu kanji while following hygiene and social distancing protocols.

Using roughly the same spices as biryani, nonbu kanji is a meal in itself. Raw rice (basmati or jeeraga samba) is cooked to a mushy consistency in a flavourful broth of mutton or vegetables, and then tempered with thinly-sliced fried onions. Recipes vary according to region, and availability of ingredients. “As the nonbu kanji is perhaps the only proper food that many poor fasting Muslims can afford to have during Ramzan, we try and reach out to as many needy people as possible,” says Mohamed Yusuf, secretary of the Masjid Javeed mosque, which functions under the auspices of the Anna Nagar Islamic Centre in Chennai. We are happy that we have been allowed to serve kanji this year, in keeping with the spirit of Ramzan. We have been following the health guidelines to ensure a safe experience for both the public and the staff,” he adds.

‘Nonbu kanji’ being distributed to the public at the Masjid Javeed in Anna Nagar, Chennai. Photo: Special Arrangement/THE HINDU

The mosque employs four cooks, who have cleared the COVID-19 test and who wear gloves and masks before they begin the mammoth task of preparing kanji from at least 40 kilos of rice per day. “Earlier around 80-100 kilos of rice were needed as we would serve kanji at the sit-down iftar to around 1000 people on our premises, besides the public takeaway. Due to the lockdown, we have decided to cancel the iftar on our premises, and prepare kanji only for distribution this year,” says Yusuf.Social distancing norms are being followed, with separate entry and exit points to keep the entire process as hygienic as possible, he adds. Close to a thousand people from areas in and around Anna Nagar avail the nonbu kanji serving.

In Madurai’s Masjid-ut-Taqwa mosque, mass caterer Syed Ibrahim and his mother have been up since 5am, cooking kanji with jeeraga samba rice using his father’s recipe; he starts with the broth rather than sautéing the basic ingredients in oil to keep the dish lighter on the stomach.

The kanji is built up in layers, with rice, lentils, fenugreek, coconut shavings, coriander and mint leaves added to the glutinous mix. On some days, minced mutton is added for a non-vegetarian twist. When eaten with fried snacks like samosas and vadais, a bowl of nonbu kanji can be a hearty dinner.“After the kanji is ready here, I go off to Sempatti (55 kilometres from Madurai) to make the same dish at a mosque there,” says Ibrahim, adding, “It’s not just about the food, but also a kind of social service, because countless people are going to eat what we cook.”

Contributing towards nonbu kanji preparation has been a tradition for many Muslim families over generations in Tamil Nadu. “Funding the kanji operations adds to the camaraderie in the congregation, where everyone does their bit,” says V M Abdul Rafi, a Madurai-based functionary of the Tamil Muslim Munnetra Kazhagam (TMMK). “In cities like Madurai, the kanji alone in some mosques will cost upwards of ₹25,000 per day, which congregation members will sponsor. Others who want to be part of the effort, can chip in for side dishes like fried snacks, fruits, cool drinks and bottled water,” he adds. “Earlier, nonbu kanji used to be prepared in huge cauldrons at home, and families used to share it with everyone in the neighbourhood, irrespective of their religious affiliation,” says Rafi. At Tiruchi’s Periya Pallivasal (Big Mosque) on Tennur High Road, nonbu kanji is served post noon. “This year, we are making kanji from 65 kilos of rice which will feed around 1,200 people,” says mosque trustee Maulvi M Zahir Hussain Ilhami.

The five-hour cooking process ends with the kanji left on dum (heat compress) on the firewood stoves, until it is ready to serve. Nonbu kanji aficionados say the firewood imparts a smoky flavour to the dish that is quite impossible to achieve at home. Zahir adds that though most mass caterers ensure that the entire cauldron of nonbu kanji is distributed before 8pm, they “prefer to serve it fresh every day, to keep it as nutritious as possible.”