Find your flavour: a guide to heirloom spice mixes 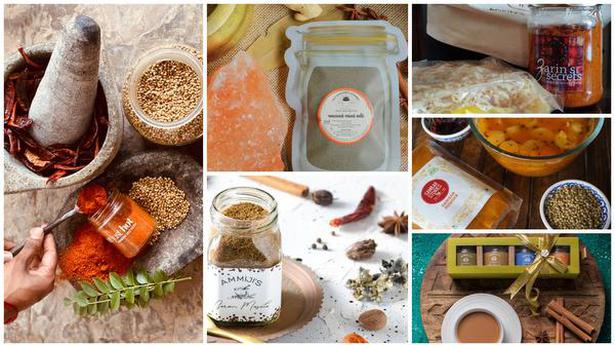 Kartha masala to Parsi khara, a guide to heirloom spice mixes that have a following across the country

During last year’s lockdown, the owners of Matamaal, the Kashmiri Pandit restaurant in Gurugram, realised that people were craving their dishes like rogan josh and yakhni curry. “We started thinking of something that can be easily made at home,” says chef and director Nalini Sadhu, who came up with the Rogan Josh Spice Mix — a tweaked version of a family recipe (₹150 onwards on kanzandmuhul.com). Lockdown or not, several others have taken a similar route to bring family favourites to the masses. A round-up:

Known for their classic chai masala (with cardamom, cinnamon, and star anise) and paratha masala, this New Delhi-based brand’s USP is their heirloom touch. “Most recipes, especially for the spice blends, have been passed down to us by my paternal grandmother, who we affectionately call Ammiji. Our first launch was the chai masala [₹499] that she developed when she was a young bride in the 1940s,” says founder Amrita Chatwal, adding that a part of their production happens in Amritsar. Ingredients are purchased from a dealer in Khari Baoli who sources them from plantations in Kerala and the Northeast. Details: ammijis.com

Also read: Spices 101 — chefs on where to source the best

Five years ago, Shelley Subawalla kickstarted the brand with four Parsi recipes, including the dhansak and curry masala handed down by her grandmother. “I want to make Parsi cuisine accessible,” says Subawalla, who expanded the range with other family recipes before launching the line. She provides recipes with each masala, and says the Parsi Khara and sambar masala are bestsellers. “The latter is totally different from its South Indian namesake. It has mustard, fenugreek and a few other spices blended with oil,” she says, adding that each mix is a combination of 15-20 spices. ₹400 for 250 gm at Zarin’s Secrets (@zarinssecrets)

Ancient ingredients like dakhini namak and sendha namak (now trending as Himalayan pink salt) find place in Vasundhara Jhunjhunwala’s spice mixes. Established in 1993 by her mother, Jhunjhunwala took over in 2014. The heirloom recipes date back several generations — the ancient mint salt (₹150), for example, was in “tola and masha”, the old Indian measurement system. Their Mangalore ghee roast masala is popular, and recent launches include a Chettinadu masala. Details: oldfashionedgourmet.com

Need a pandi curry in a hurry? Reach for Sakkath’s kartha (black) masala and kachampuli. Made from spices sourced from Coorg, it is slow roasted and ground, with lashings of black pepper giving it its distinctive colour and flavour. “Combining the masala and kachampuli imparts the dish with a lot of nutritional benefits, and also reduces how much fat [from the pork] is absorbed by the body,” says Uthappa, who started Sakkath last October.

The former copywriter perfected her masala by poring over her grandmother’s hand-written recipe books over the lockdown. “Proportions are so very important, and I’ve tweaked my recipe according to what she had jotted down, adding more coriander seeds for example, to give it more depth.” She also collaborates with home chefs in Coorg to bring down pickles, jams and the like for her pop-ups. “I was recently introduced to a wild, flat-leaf coriander. It grows in the estates and forests, and is more fragrant than the regular herb. The home cooks also taught me to add lime leaves to pork curries, to cut out the heavy ‘meatiness’ of the dish.” ₹150 (200 g), @sakkathstuff

“My mother decided to start working when we were teenagers. It was then that she came up with these spice mixes. They taste so authentic, like the masalas you stone grind and slow roast,” says Hegde, former senior vice president – sourcing for Tommy Hilfiger and Calvin Klein in India, who started Not Just Hot last June to create products that “I missed when I was working, which could help me make quick, easy, healthy meals”.

It took a while to create the Mothership’s Mangalorean Spice Mix — which she says is great for a quick ajadina (dry fry) or slow-cooked gassi (gravy), and is versatile enough to be used in vegetarian, meat and seafood dishes — because “it took me years to get it out of my mother [there was no concept of measure; everything was judged by the eyes and the hand]”. Adding another layer of special: all the spices are sourced from a 72-year-old woman, who farms in Karnataka’s Thirthahalli district.

Other bestsellers include her chilli oils, wok sauces, curry pastes, and spice rubs. Spice mix at ₹290 (190 ml), on notjusthot.com

When Sneha Sirivara’s relatives (living far away from home) were finding it difficult to find good quality masala powders, she decided to launch her own venture. Initially started in her garage, the brand now manufactures masalas, based on family recipes, in bulk. Their bestseller is the sambar powder (₹90) made with coriander seeds, red chillies, coconut, fenugreek, chickpeas, and cinnamon. “The molagai podi (₹70) and special filter coffee powder (₹195) are also favourites,” says Sirivara, who also retails snacks and recently launched a protein-rich health mix powder with grains, millets and dry fruits (₹190). sambarstories.com

A few years ago, a cousin telephoned Antony to rave about the sambar she had eaten at a friend’s wedding in the seaside town of Alappuzha. Curiosity piqued, Antony dug deeper and discovered that the sambar mix was made by the friend’s mother-in-law. She tracked her down, deconstructed the proportions — “how many teaspoons is a kai pidi (handful),” she laughs — and created a spice mix that is one of the bestsellers at her store.

Another popular product is an all-purpose mix that she learnt from her aunt, Rajamma John. “She is my guru in the kitchen and this mix is so versatile that I use it in chicken and beef curries, vegetable korma and even biryani,” says Antony, who is now making customised dry mixes (think naadan prawns curry) for an American company. Up next, expect millet mixes (good for people with diabetes and for lactating women) and ragi flakes, in a collaboration with the FPO (Farmers Producers Organization). Sambar mix is ₹45 (100 g) and meat masala is ₹75 (100 g). To order, WhatsApp 9895316498

Vanilla extract from Madagascar beans to food colours drawn from paprika, marigold and spinach, this Kerala-based brand boasts all things natural. Ashok Mani, CEO of Intergrow (that owns Sprig) says their sauces are a bestseller. “The bhut jolokia sauce [₹349] made from ghost peppers, and our Mexican variants in Habanero, Jalapeno and Chipotle, are popular. Our processes are intricate; in Habanero, the chile mash is fermented in oakwood barrels to an optimum level before being bottled,” he says. sprig.co.in

Also read: Spices 101 — chefs on where to source the best

One of the few brands making mixed masalas for the Bengali palate, Shelly’s is popular both locally and across the country. “Shelly is my mother’s name,” says Ganguly, executive director of Surji Agro Foods. “She created these recipes through years of culinary experiments and through recipes handed down to her. These are very specific masala blends [reminiscent of what I ate growing up].” With around 10 spice mixes, he is quite proud of their specialities such as shukto, doi maach and malai curry. ₹80 (100 gm) onwards, on amazon.in and bigbasket

Three years ago, Gangtok-based Sailesh Pradhan decided to take up a passion project: making Dalle chilli paste. He started growing the fiery Dalle Khursani (which received the GI tag last year) at his nursery, and then created a recipe for it based on what he grew up eating.

He first semi-dries the chillies before adding garlic, oil, salt and vinegar (the last two acting as natural preservatives). The Dragon’s Fire Red Hot Dullay Chilli Paste can be eaten as an accompaniment with a regular meal of rice, dal and pork curry. “One big difference between the Dalle chilli and the Bhut Jolokia is that this chilli has a wonderful aroma,” says Pradhan. ₹200 for a 120 ml jar. Call 9832060555.

In October 2020, founder Preeti Parekh decided to take her mother-in-law’s famed chai masala to the masses. “She used to always make it for friends and relatives, and the lockdown prompted us to go commercial,” she says, explaining that the 60-year-old recipe is a mix of seven spices: dry ginger, clove, black pepper, cinnamon, cardamom, nutmeg and mace. The brand – that sells anywhere between 700-1,000 packs of tea masala in a month – has recently launched tea leaves and plans to venture into whole spices such as black pepper, dry ginger, etc. ₹125 onwards. Call 7045553322.

Spice blends based on family recipes and regional mixes such as Karnataka’s bisi bele bath and Uttarakhand’s pahadi aloo masala is what this brand is known for. Warsha Vimadalal started Sondevi in 2018 when she found that over-the-counter spice blends lost their fragrance and texture over time. “I grew up watching my mother make blends like garam masala and sambar powder, and I added to this list with my own research. The spices are almost the same in most masalas, only the composition varies.” The USP, she adds, is that they are hand-pounded and contain zero artificial preservatives. ₹200 for 100 gms. Call 9833671679.

“India is more than butter chicken and chicken tikka,” says Aarti Samant who kickstarted the venture in 2019 along with her mother Urmila, as they felt “that the spices category was heavily commoditised by big MNCs”. “If you go from one state to another, the curries and the blends are different. For example, the fish fry from Goa or the Awadhi biryani from Lucknow are so distinctive. These are the kinds of stories we wanted to put out,” says Samant who offers gourmet spice blends such as Maharashtrian Goda Masala, Goan Fish Masala, Awadhi Biryani Masala, Kerala Sambar Masala, etc. Spices are dark roasted at their factory and are then sent to pounding machines that are designed to replicate the way our grannies hand pounded masalas. ₹95 onwards for 100 gms on masalatokri.com