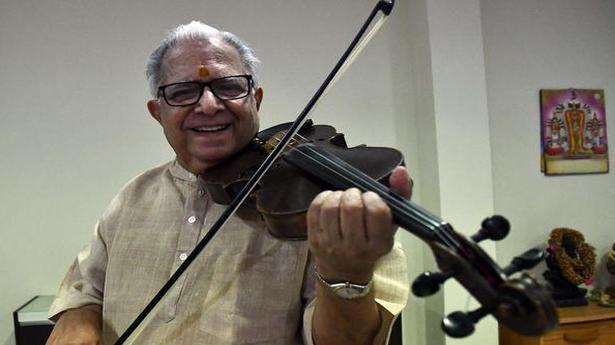 The ongoing Svatantra 2021 festival is dedicated to maestro T.N. Krishnan

The ARTery is dedicating its recently inaugurated Svatantra 2021 festival to the late violinist Prof. T.N. Krishnan. Professionally recorded, hour-long concerts by several recognised artistes will be released every fortnight for about 15 Sundays, culminating with Krishnan’s first death anniversary in November.

Ramanathan Iyer, who has curated the series, says, “ each performance will feature one major piece – it could be a kriti, a varnam, a pallavi. The pieces are painstakingly selected to showcase as much variety as possible across banis, composers, ragas, etc. They will be presented by vocal and instrumental artistes, representing different styles, with careful attention paid to ensure that not only are the compositions highlighted but the beauty of the instruments as well.”

Major compositions rendered in detail were the mainstay of yesteryear concerts, something Ramanathan is trying to revisit. From 2013 to 2018, Svatantra was an annual festival organised around Independence Day, hence the title. “It could not take place in 2019 due to a lack of sponsors, but in January 2020, it was held in Thiruvananthapuram in memory of my father. It was the first time the event was not backed by corporate sponsorship. So it is with this edition too.”

The curtainraiser last Sunday featured a violin recital by Charumathi Raghuraman, one of Krishnan’s leading students. Anantha R. Krishnan accompanied her on the mridangam with G. Chandrasekara Sharma on the ghatam. Anantha’s first concert as a young boy was with Krishnan, and Chandrasekara Sharma has played with the doyen on many occasions.

Other artistes lined up include Palghat R. Ramprasad, Jayanthi Kumaresh, Ramakrishnan Murthy, Amritha Murali, Anil Srinivasan, and S. Sowmya. Others will be scheduled in due course. The concerts will be available for free.

All the concerts are recorded at The ARTery’s venue in Royapettah, a heritage home redone specifically to facilitate recordings and live, unplugged performances.

The programmes will be aired on The ARTery’s Facebook page and YouTube channel at 7.30 p.m. on alternate Sundays, with the next episode on May 9.

The author writes on classical music and musicians.