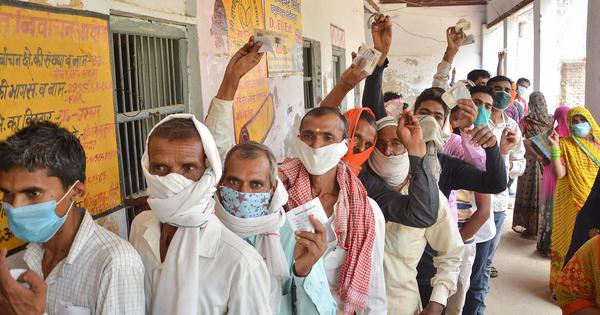 Teachers’ unions in Uttar Pradesh have submitted a list of 577 educators and support staff to the state election commission, who have died while on poll duty during panchayat elections, India Today reported on Thursday. The elections were held in four phases on April 15, April 19, April 26 and April 29 and the votes will be counted on May 2.

Dinesh Chandra Sharma, the president of Uttar Pradesh Shikshak Mahasangh, said the association had sent a list of the teachers from 71 districts who died during the elections held amid the massive second wave of the coronavirus pandemic.

“The union had requested the state election commission to postpone the polls after there was a big increase in [coronavirus] cases on April 12,” Sharma told India Today. “But the request was ignored.”

The unions have now requested the poll body to postpone the date of counting from May 2.

On Tuesday, the Allahabad High Court had issued a notice to the state Election Commission on the reported death of 135 polling officers due to the surge in Covid-19 infections during the elections. The court took cognisance of a news report published in Hindi daily Amar Ujala that said 135 teachers, “shiksha mitras” or para-teachers, and investigators who were on election duty had allegedly succumbed to Covid-19.

However, one of the union leaders told IANS that the High Court notice did not benefit the teachers as the next hearing in the case was on May 3, a day after votes will be counted.

Meanwhile, Uttar Pradesh Special Work Officer SK Singh on Wednesday issued a letter to all district magistrates, superintendents of police and district electoral officers to verify reports about deaths of teachers and provide a report within 24 hours, India Today reported.