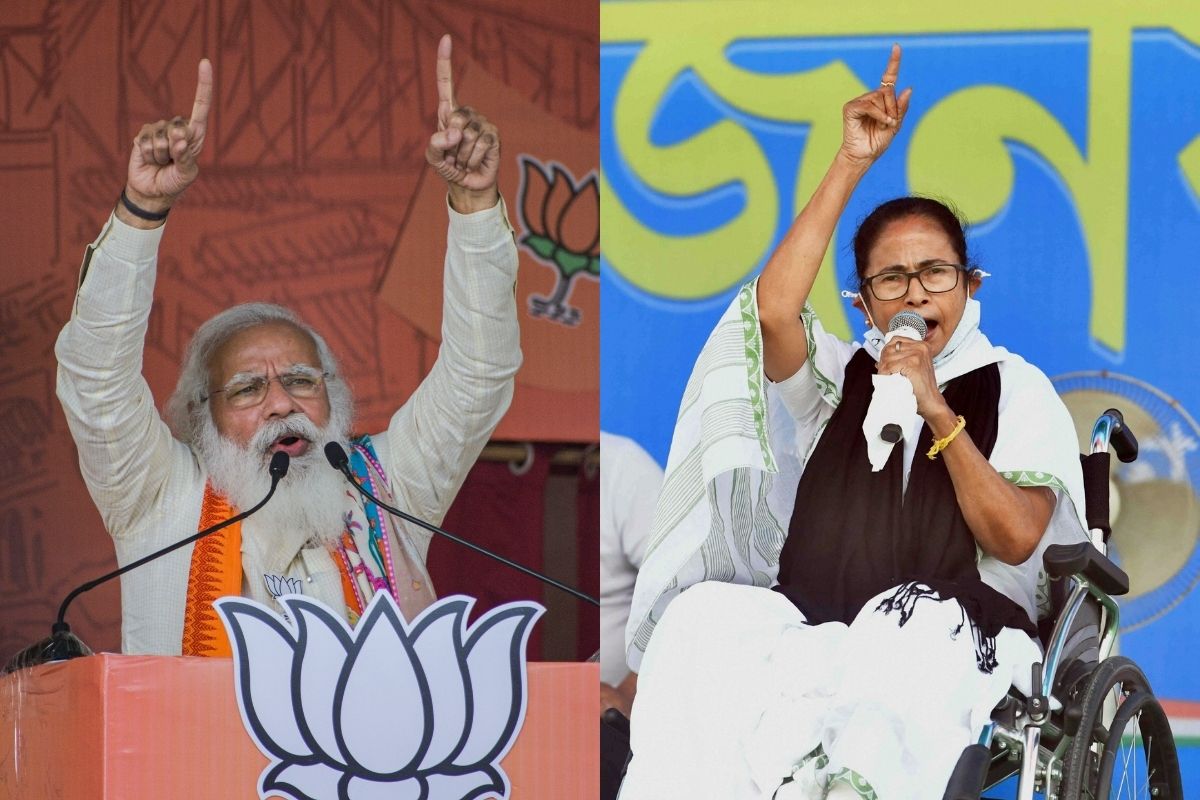 Exit polls were as polarised as the elections in West Bengal with some predicting a clear win for the Trinamool Congress and some gave BJP the edge while the watched-out pollster ‘AXIS My India’ forecasted a cliffhanger.

Bengal has proved to be a tricky election to predict this time with the BJP and the TMC continuing to be strong in certain regions. Several factors were at play in the high-voltage battleground of Bengal: the voter being largely silent on whom it will vote for, evaporation of the Third Front, and incidents like Sitalkuchi in Phase-4 that could have united the Muslim vote. The second wave of Covid-19 during the last two phases of polls may have impacted urban Kolkata seats too. This also reflected in the exit polls of leading agencies.

C-Voter gave a comfortable majority of nearly 160 seats to the TMC while Today’s Chanakya gave TMC a clear majority of 180-plus seats. However, People’s Pulse gave a clear majority to the BJP with over 170 seats. Both AXIS My India and POLSTRAT have meanwhile predicted a cliff-hanger with AXIS saying BJP could win 147 seats against 143 by TMC while POLSTRAT said TMC could win 142-152 seats and BJP could win 125-135. 292 seats of West Bengal went to the polls with the magic mark being 147.

In a long 8-phase election with polling stretching over a month, BJP seemed to have the edge in the first four phases as areas in which it was strong went to polls first, like Junglemahal and North Bengal. The two regions where BJP was not strong during the first four phases – Medinipur and South 24 Parganas District – also seem to give some boost to the BJP this time due to the presence of Suvendu Adhikari who took on CM Mamata Banerjee in Nandigram in Medinipur, and the public anger against TMC’s Diamond Harbour MP Abhishek Banerjee in the South 24 Parganas District which was wreaked by Amphan cyclone last year and the poor had not received much relief here.

However, TMC seems to have got a lease of life from the Sitalkuchi incident that happened during Phase-4 polling in Cooch Behar district of North Bengal in which four Muslims were killed in firing by paramilitary forces. The CM rallied on the issue to unite the Muslim vote since then, camping in the key Muslim-dominated districts of Malda, Murshidabad and Dinajpur for nearly a week to cash in. The absence of the Congress from these districts where it had won nearly 30 seats last time – Rahul Gandhi called off his campaign in Malda and Murshidabad while local Congress MP Adhir Ranjan Choudhary fell sick due to COVID – helped the TMC further.

So the BJP, which led in 121 assembly segments in the 2019 assembly elections, has looked to gain in regions like Medinipur, Burdwan, South 24 Parganas and North 24 Parganas to be able to cross the magic mark. However, the TMC has aimed to make good its losses in such areas by making fresh inroads into Malda and Murshidabad, to the extent of Mamata Banerjee telling Muslim voters there that she would not be able to form the government if she does not get seats in these two districts. BJP wanted the Muslim votes here to be divided between TMC and Third Front. Another X-factor is if the COVID issue further consolidated TMC in 11 Kolkata seats.

If all this has determined the course of the election will only be known Sunday.

Bad News for Congress in other states

Most pollsters have however been rather unanimous about the results in the other three states and Puducherry UT with the Left predicted to retain Kerala, BJP to retain Assam while the DMK-Congress combine is forecasted to come to power after a decade in Tamil Nadu and Congress is tipped to lose power in Puducherry. This could mean a big loss of face for the Congress as well as Rahul Gandhi, the Wayanad MP from Kerala if the party loses Kerala under his watch especially as the state has historically voted out the incumbent. Congress is only a minor partner in Tamil Nadu and has put its cards on Assam where both Rahul and Priyanka Gandhi Vadra campaigned extensively. While some exit polls show a close fight in Assam, a second consecutive loss in the state ruled for long by Congress could expose pitfalls of the larger strategy behind such fights. Sunday could hence prove to be a big day for the fate of the impending return of Rahul Gandhi as the Congress Chief.