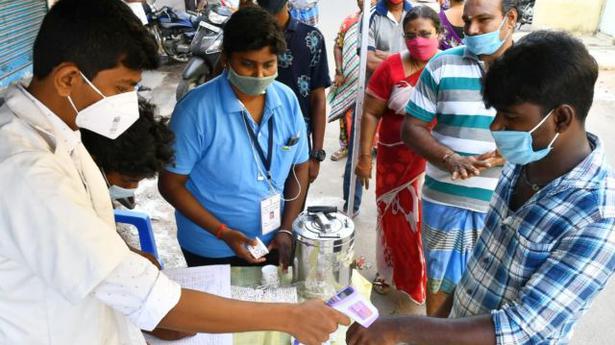 Around 15 countries including the US, Russia, France and the United Kingdom are rushing critical emergency use equipment to enable India counter the COVID-19’s deadly second wave. A compilation from the Ministry of External Affairs showed that countries are sending hundreds of oxygen concentrators, respirators and large quantities of liquid oxygen to help ease the difficult situation facing India.

A study has found that people who have been vaccinated with Covaxin have protection against the double mutant (B.1.617) variant first found in India. A preprint of the study carried out by ICMR and Bharat Biotech researchers has been posted in biorXiv. Preprints are yet to be peer-reviewed and published in medical journals.

So far 21 countries have detected the B.1.617 variant, most of which have been reported from India.

The researchers used the sera collected from 28 people who had participated in the Covaxin phase-2 trial. They also collected sera samples from 17 people who were infected with older strains of SARS-CoV-2 virus and had recovered.

“The study found that the neutralising capacity against the double mutant (B.1.617) variant was found to be good in both groups — people who have received the vaccine and those who have recovered from COVID-19,” says Dr. Samiran Panda, a senior scientist at ICMR and one of the co-authors of the preprint. “Compared with people who have recovered from COVID-19, the ability of the sera of vaccinated people to neutralise the B.1.617 variant was found to be two-fold less.” — R. Prasad

As Karnataka is facing a severe shortage health infrastructure for providing treatment to COVID-19 patients, Leader of the Opposition and former Chief Minister Siddaramaiah on Wednesday said the State government should hire the services of retired doctors and para-medical staff, including nurses, on temporary basis to mitigate the problems created by the pandemic.

In a letter to Chief Minister B.S. Yediyurappa, the Congress leader has given 11 suggestions for management of the COVID-19 situation in the State and asked the government to rope in final-year MBBS and para-medical students for providing treatment for patients under the guidance of experienced doctors. Almost every district has government and private medical colleges.

Kerala to purchase one crore vaccine

Kerala has decided to purchase one crore COVID-19 vaccines directly from manufacturers and to make it free of cost to citizens as announced in the budget.

The Cabinet meeting, chaired by the Chief Minister Pinarayi Vijayan here on Wednesday, took this crucial decision hours before the online registration for vaccination for those above 18 years is to begin in the country. Of the one crore vaccines to be purchased, 70 lakh doses will be Covishield and 30 lakh Covaxin. The first 10 lakh dose is to be purchased next week.

Only one-third of the total 500 oxygen beds at the ITBP operated COVID-19 care centre in south Delhi are occupied as the border guarding force said the capacity to admit coronavirus infected patients at the facility is “limited” due to supply of oxygen.

The paramilitary force said there is a huge influx of patients demanding admission at the facility and it has requested the Delhi government to increase oxygen supply so that admissions are increased.

The directory is built right into the app and can be accessed from either the menu or the dialer, it said in a statement.

“The directory includes telephone numbers and addresses of covid designated hospitals from multiple states across the country, sourced from official governmentdatabases”, it said.

Health officials in Arunachal Pradesh’s Lower Dibang Valley have ordered a re-test on 11 people who found themselves on the COVID-19-positive list despite testing negative, local dailies in the State reported.

District Medical Officer R. Tatan attributed the faux pas to a clerical error and said officials with the Integrated Disease Surveillance Project have been asked to conduct a re-test on the 11. The error was made on April 26.

To speed up delivery of emergency supplies to India, Singapore has deployed two of its Air Force transport aircraft to transport oxygen cylinders and other critical supplies which will arrive in India later on Wednesday, April 28, 2021.

Vaccine registrations for 18-44 age group to begin today at 4 p.m.

People waiting to get their second dose of vaccine at a health centre in Virugambakkam, Chennai on April 27, 2021.
| Photo Credit:
B. VELANKANNI RAJ

Registrations for vaccine appointments for those aged above 18 will begin at 4 p.m. on April 28, a Health Ministry spokesperson has confirmed to The Hindu.

A notification from MyGov.in, the Centre’s official data repository, also confirmed the 4 p.m. slot, adding, “Appointments at State government centres & private centres depending on how many vaccination centres are ready on 1st May for vaccination of 18 plus”.

A public interest litigation (PIL) has been filed in the Bombay High Court challenging the different rates for COVID-19 vaccines for the Centre and state governments and requesting direction to the Serum Institute of India (SSI) and Bharat Biotech to sell their vaccines at a uniform rate of ₹150 per dose.

The PIL, filed on April 24 by advocate Fayzan Khan and three law students, said the vaccine is presumed to be an essential commodity and hence its management and distribution cannot be left in the hands of private companies.

“These pharma giants are milking the fear psychosis of the increased death rates due to COVID-19,” it said.

As it gears up to organise free vaccination camps for those in 18-45 age group, the Tamil Nadu governement has ordered for the procurement of 1.50 crore COVID-19 vaccines in the first phase.

According to an official release, the orders have been made by the Tamil Nadu Medical Services Corporation (TNMSC). So far, 55.51 lakh people have taken COVID-19 vaccine shots across the State.

South Korea on Wednesday, April 28, 2021, said it will provide India with oxygen concentrators, COVID-19 diagnostic kits and other aid items to help the South Asian nation with the world’s worst surge in coronavirus infections.

Health official, Yoon Taeho said on Wednesday that the government will also allow irregular flights to bring back South Korean nationals from India. He says those returning will undergo virus tests three times and be placed under a quarantine.

Mr. Yoon didn’t elaborate on the amount of aid items South Korea will send to India. The country’s Foreign Ministry said Tuesday that the amount of material it was considering sending to India would be “considerable.” Earlier Wednesday, South Korea reported 775 new virus cases, taking the country’s total to 120,673, with 1,821 deaths.

It is for the first that the State has breached 8000-mark causing a significant worry for the government. The State reported an increase of 2,313 cases – highest ever single day growth — over 6,073 cases reported on Tuesday.

Khordha, of which capital city of Bhubaneswar is a part, is the worst affected district reporting 1840 cases alone. Khordha is followed by Sundargarh with 933 cases and Jharsuguda 433 cases respectively.

A worrying signal from the Secretariat

An increase in COVID-19 cases among the employees of the Secretariat has become a cause for concern. A section of them wonders why the government has not deployed the staff in rotation as it did during the first wave last year.

“Last year, when there was a spurt in the cases, the government decided to allow only 50% of the staff to go to offices. This year, a huge number of cases are reported every other day, but the government is yet to decide [on the rotation],” said G. Venkatesan, former secretary of Tamil Nadu Secretariat Association.

Doctors divided over use but scramble for Remdesivir continues

The scramble for Remdesivir, the anti-viral drug used in COVID-19 management, is increasing by the day even as doctors are divided on its use. While a few doctors are of the opinion that not all require this drug, many say it hastens recovery and helps bring down the viral load if given early.

Amid the spiralling number of COVID-19 positive cases, a Group of Ministers (GoM) from Rajasthan visited New Delhi on Tuesday to apprise the Centre of the shortage of medical oxygen and essential medicines, which was posing a difficulty in the treatment of serious patients. The State recorded the highest single-day rise in the death toll with 121 persons succumbing to the infection.

Chief Minister Arvind Kejriwal on Tuesday said that the Delhi government would, with the help of the Centre, import 21 ready-to-use oxygen plants from France and 18 oxygen tankers from Bangkok, to ensure a steady supply of oxygen in hospitals across the Capital.

He thanked the Centre for allotting five additional oxygen tankers to Delhi and said that within the next month, the Delhi government will install 44 oxygen plants out of which eight plants will be installed by the Central government.

(With inputs from our Correspondents and agencies)