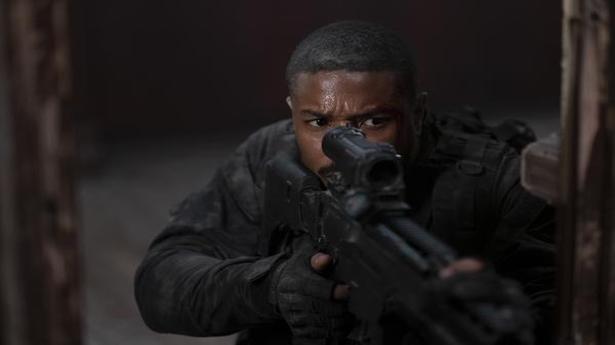 For the Tom Clancy universe film, the actor trained like a Navy Seal with combat training and deep-sea diving

In Without Remorse based on the eponymous Tom Clancy book, Michael B Jordan plays John Clark, a US Navy Seal, who gets sucked into a sinister whirlpool. Sounding relaxed over a call from Los Angeles, and often peppering his conversation with “you know what I mean,” Michael says, “I was already familiar with the Tom Clancy universe. I played the video games as a kid. As I got older, I got the chance to watch the movies and slowly got into the novels.”

Film rights for Without Remorse were brought soon after the novel’s release in 1993. “This script has been around for a few years in Hollywood. When I was looking for projects that could potentially be a franchise, this was one that had a lot of elements that interested me. After making it a little bit more modern and representative of the world I live in today, it had a lot of potential. So we rolled our sleeves up over the last few years and started cracking into it.”

Like his previous characters, whether it was a boxer in Creed or Killmonger in Black Panther, John Clark required a certain level of physical fitness — almost Jason Bourne levels.

Laughing Michael says, “One of the goals that my trainer and I set was that each character would look different — the physique wouldn’t be the same. In Creed, I wanted to look like a boxer, and for Panther I wanted to be more military but more menacing. For Without Remorse, I wanted to train like a Navy Seal. I did a lot of combat training. I spent a lot of time in the water, a lot of deep sea diving, military diving, weapons and combat training. The body slowly starts to adapt to the task at hand. The diet and discipline however, stay the same.”

The novel is set in the 1970s with Russia as a villain and even with setting the movie in the present, the Russians still are the villains. “That was not the intent. Towards the end of the movie you understand who is playing who. I think when you are developing movies like this, finding an antagonist that is bigger than one person is important. It is just movie dynamics. The question is how to make the story complex. In the beginning you believe the government is responsible and as you dive deeper, you find out more and understand that the true bad guy is playing on those stereotypes in order to influence a war that he ultimately wanted to start himself.”

The 34-year-old actor is one of the producers for Without Remorse and is set to make his directorial debut with Creed III. Did he feel at some point that acting was not enough? “Producing is important to me because it creates more opportunity. I have been extremely blessed, to have the career that I have had. There are a lot of talented actors out there that just don’t get the shot. I think the more vehicles I create, the more opportunity it is for others to get the shots that I did.”

Getting older, evolving and doing something for 20 years, Michael says, one starts to look at other things on set. “You start to be interested in other aspects of filmmaking. At one point I wanted to be a DOP [director of photography]. Wallace’s death scene on The Wire got me interested. We shot it late into the morning, the sun was coming up but they blacked out the windows and still made it look like it was 10 o’clock at night. Being able to play with lighting was something I was interested in.”

Michael said he also got tired of being told what to do. “You feel like, I want to set the camera up over here and I kind of like that lens and that dolly shot is a wonder and, oh that is cool. You ultimately want to tell stories your way. I obviously love being directed, and I love acting but I think I’m finally at the point in my life where I want to challenge myself.

Michael says he is at the point where he wants to challenge himself, “I thought what better project to start off with than Creed, which I have been in from the beginning. I know the process and the character. I know what I want to say, I know what I want. I have been daydreaming about it for a few years now so it is cool.

While quashing rumours of leading the Superman reboot, Michael said he hopes there would a sequel to Without Remorse. “It is an awesome universe. I’m curious to see where John Clark can go from here, and what Rainbow Six represents. It is John’s way of doing things the right way and making sure what happened to him does not happen to anybody else. It is his objective point of view on what is right and fair and ensuring everybody is playing nice. We are looking forward to seeing where we can go with this.”

On his thoughts on franchise versus standalone films, Michael said, “The main thing is you want to make a good movie. You cannot already be in a second and third movie before you finish the first one. You want to make one that can stand the test of time and be strong on its own. Once you finish that movie, you hope that the character in the world that you create is interesting enough that you want to see him do other things. You want to see how can you expand and grow it. Some projects are just meant to be a one off. I guess we all can tell a movie that is forced. There might be a two or three for business reasons. You have to promise me if we get past three, and it looks like I might get to stop it here, you got to say Michael, you got to the last one.”

Michael stars in Denzel Washington’s A Journal for Jordan, which is slated to be released in December 2021.

“I just finished shooting it. It is based on a New York Times bestseller. I play Charles Monroe King, a soldier, who lost his life in Iraq. All the things that Charles wished he could tell his son, how to be a man and things like that, he writes in the journal because he was afraid that he wasn’t going to make it back home. The movie takes place in New York City and Iraq. As Jordan is old enough to read the journal, we get the opportunity to see the love story of Charles and Jordan’s mother, Dana. It is a small film. The lovely Chanté Adams plays Dana and with Denzel directing, I learned so much. We made something that is very truthful, honest and special.”

Without Remorse streams on Amazon Prime Video from April 30, 2021.