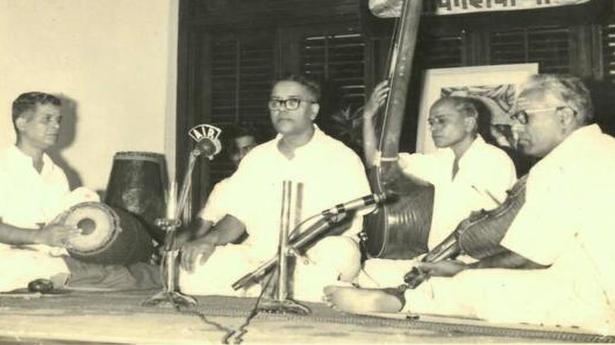 Kerala has produced several brilliant composers, but their works remain neglected in the Carnatic repertoire

Three-and-a-half decades had passed since Puthucode Krishnamoorthy’s death when the musician’s daughter Uma Parvathy put together a collection of five compositions. “This is Devi Pancharatnam, penned and notated by my father. It would be nice if you could sing them,” ,” she told vocalist Baby Sreeram during the monsoons last year. Within weeks, Carnatic music lovers got to hear the well-tuned Malayalam kritis.

The online event organised last year to pay tribute to Krishnamoorthy had five artistes singing the Devi Pancharatnam. Like the Nattai-to-Sri raga sequence of the famed Tyagaraja Pancharatnam, Krishnamoorthy’s kritis stick to the format of swara patterns subsequently finding expression in words. “But unlike Tyagaraja’s Pancharatnam where all the songs are in Adi tala, here each is set in a different tala,” points out Santhala Raju, who performed at the event.

Krishnamoorthy, who comes from Puthucode, a village 40 km southwest of Palakkad, is one among several of Kerala’s Carnatic composers whose works remain undiscovered. The recent Gana Kairali festival addressed this issue by featuring almost 200 songs in Malayalam and other languages by composers from the region.

Veteran musician K. Omanakutty, who chairs Sangeeta Bharati, which organised the festival in association with the State Department of Culture and Bharat Bhavan, says Carnatic music practitioners of Kerala suffer from an ‘needless’ inferiority complex. “In the 1990s,” she reminisces, “after a concert Irayimman Thampi at the Madras Music Academy, a rasika came up to me to know the composer of ‘Ananda rupa hare’ that I sang in Pantuvarali. ‘Kutti Kunju Thangachi,’ I replied. She wanted to know why audiences don’t get to hear such compositions more often. Similarly, during a concert in New Delhi, flautist Mala Chandrasekhar was overwhelmed by my rendition of ‘Karuna cheyvan enthu thamasam’.”

‘Karuna cheyvan,’ in Sri ragam, is by Irayimman Thampi (1782-1856), who was a musician in the court of Swati Tirunal and Thangachi (1820-1904) is his daughter. For aficionados at large, much of Kerala’s Carnatic contribution begins and ends with the Travancore Maharaja, Swati Tirunal.

Vocalist K.N. Renganatha Sarma agrees, but says Malayalam is yet to generate a significant bank of Carnatic kritis. “The lines ought to be classical for the music to sound elevating,” he says.

All the same, the Malabar coast has contributed excellent classical compositions in languages besides Malayalam. This, much before the language acquired its modern form in the 16th century. Musician S. Saketharaman points to the hymns penned by the 12 Azhwars of the first millennium CE. “Thirteen of their 108 slokas praising Vishnu’s abodes pertain to what is now Kerala. Much later, Lalithadasar, a 20th century composer, wrote kritis in Telugu, Sanskrit and Tamil besides Malayalam,” says the vocalist.

Lalithadasar ( alias T.G. Krishna Iyer), who hailed from Tripunithura, worked as a civil engineer in Madras. He was a contemporary of Chembai Vaidyanatha Bhagavatar (1896-1974). Most Chembai concerts featured the Hamsanandi raga kriti ‘Paavana guru,’ the most popular of Lalithadasar’s 150-odd kritis.

A frontline Chembai disciple, the versatile 89-year-old T.V. Gopalakrishnan, also belongs to Tripunithura. “Because of his mastery over mridangam, his compositions revel in kanakku (arithmetic) but without comprising on aesthetics,” says TVG’s disciple Rajkumar Bharati.

“When the poet is also a musician, the composition gains a holistic appeal,” says senior vocalist Mavelikkara P. Subramaniam. “We need a fine blend of dhatu (notes) and matu (words),” he adds, citing examples of a string of Kerala composers, from Swati Tirunal (1813-1846) to the Kochi-based N.P. Ramaswamy, who died in 2019. Ramaswamy’s great-grandfather, composer Palakkad Parameswara Bhagavatar, served at the Travancore court. He popularised Swati Tirunal’s Utsavaprabandham kritis particularly, through his discourses.

The 12-song Utsavaprabandham, which essays in different meters the ten-day festival at Padmanabhaswamy temple in Thiruvananthapuram, has 42 lengthy verses in Sanskritised Malayalam — Manipravalam. This hybrid language, with a history dating to 11th century CE, enriched Carnatic music through the works of composers such as K.C. Kesava Pillai (1868-1913) and Thamarasseri Krishnan Bhattathiri (1890-1963) .

Since Independence, Akashvani in Kerala played a major role in propagating Carnatic kritis from the State. “The role of dramatist-lawyer ‘Mali’ Madhavan Nair (1915-94) as the broadcast head merits special mention,” says instrumentalist-music critic S. Sivaramakrishnan. “In the 1970s, AIR used to feature exclusive Carnatic-teaching programmes with the focus on Kerala. Sadly, not even a tenth of the repertoire is found today.”

In the subsequent decade, Carnatic exponent Cherthala Gopalan Nair (1923-97), who worked with AIR, set to tune quite a few Swati Tirunal kritis such as ‘Aliveni’ (Dwijavanti) or ‘Bhajabhaja manasa’ (Sindhu Bhairavi), says his musician-son G. Sriram. “Even Thampi’s ‘Karuna cheyvan,’ and ‘Adimalarina thanne’ (Mukhari) and Thangachi’s ‘Ananda rupa’ were set to tune by him, besides those by Kesava Pillai, Keerikad Gopala Pillai, North Malabar’s Kuttamath Kunjikrishna Kurup, and Kottayam Kerala Varma.”

Earlier, in the 1940s, titans such as Harikesanallur Muthiah Bhagavatar and Semmangudi Srinivasa Iyer brought out books with notations for 100 Swati Tirunal kritis.

The practice of the writer of the songs not being the composer continues. Some Sanskrit works by retired bureaucrat ‘Tulasivanam’ R. Ramachandran Nair feature in the concerts of veteran musicians T.V. Sankaranarayanan and T.N. Seshagopalan. Many of them were tuned by scholar-teacher R. Prabhakara Varma (1928-2008), who also wrote Carnatic compositions. Varma’s disciple ‘Poornathrayee’ Jayaprakash Sharma has 400 kritis to his credit.

C.S. Krishna Iyer, another 20th-century musician from Palakkad, has written Carnatic kritis that often dealt with emotions beyond bhakti and he composed music for the same. “In the 1960s, he, along with Puthucode Krishnamoorthy and V. Dakshinamurthy, composed music for modern poems by Sankara Kurup, Vennikulam Gopala Kurup, Kunhiraman Nair and N.V. Krishna Warrier,” says Krishna Iyer’s student Sadanam K. Harikumar, who has composed two dozen Malayalam kritis.

Percussionist Vaikom Venugopal suggests the inclusion of songs by Kerala composers in the syllabus of the State’s music colleges. Adds vocalist B. Arundhathi: “Malayalam-speaking Carnatic musicians must ensure that their concerts include works of composers from the region.”

Since the 18th century, Kerala has been enriching the Carnatic repertoire with the works of satirist Kunchan Nambiar, Shadkala Govinda Marar, Rugmini Bayi (Swati Tirunal’s sister), and Neelakanta Sivan.

The writer is a keen follower of Kerala’s performing arts.