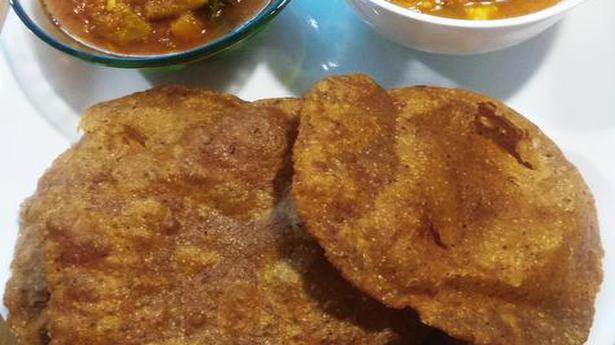 One of the best potato curries I have ever eaten was at a Jain household, decades ago. The potatoes were soft but not mushy and had soaked in the flavours of the gravy. I later asked what the masalas were, assuming that there would be a long list. Nothing but hing (asafoetida) and cumin seeds, I was told.

Since then, I have been a fan of Jain food, cooked without onions and garlic, and usually with just two or three spices.

Last week, stuck at home and thinking wistfully about the next meal, I was struck by a yen for satvik food. I did some research and found a restaurant called Jain Annapurna Shudh Satvik Rasoi in Ramprasth Colony, just across the border from Vivek Vihar in East Delhi (Phone number: 9810836525). I was impressed by all that the menu offered: It had some nice veggie dishes served with the bread of your choice: lachcha parathas, rotis smeared with ghee, or plain rotis.

I started with the masala puri. A mix of spices had been kneaded into the dough. The fragrance and taste of ajwain in it gave the puri a nice punch, and I had it with the light potato curry and the muttar ki sabzi, which was mildly sweet and soft, but not soggy. The ghee-topped lachcha paratha was soft and layered, and went really well with the potato, cooked with tomatoes in a dry preparation.

The lauki — bottle gourd — was pretty amazing too. The gourd had taken in the flavours of the light gravy, which had been simmered with tomatoes, cumin seeds and chillies. The rotis were soft, and made softer still with a dab of ghee. The mung dal khichri was the grand finale. It was deliciously light, though creamy and aromatic.

What didn’t work was the raita, which had turned too sour. It reminded me of a dish called sannata, prepared with curd collected from different households for a village feast. This curd dish used to be so sour that it evoked total silence — or sannata! The raita didn’t reach the sannata level but my lips stayed puckered for quite a while.

I, however, enjoyed the food so much that I called up the rasoi and spoke to the lady in charge: Ritu Jain. The food was mostly cooked with hing, zeera, red chillies and desi ghee, she said. She wouldn’t tell me what the masalas in the puri were (it is a family secret, she said) but agreed that there was ajwain in it. How was the khichri so light? “Haath ka kamaal hai (It’s all in the hand),” she replied. I give her a big hand.