We all love mountain-sized monsters destroying fictional cities, don’t we? For decades, we have watched movies, like King Kong (1933) and Godzilla (1954), and come to love them so much, that they have become a genre of their own- “Monster Movies”. Even today, monster movies are the preferred kinds which some of us search on various OTT platforms to watch with friends.

The latest in the line of monster movies is ‘Godzilla vs Kong’, an epic smackdown between two of the greatest monsters ever. The film hit the theatres on 21 March 2021 and emerged as a box office success. It received praise from the audience and critics alike, for its plot, visual effects, and action sequences.

Yes, you might have already watched it and must be looking for other great monster movies to stream at your home. Here are a few that should keep you at the edge-of-your-seat, cheering your favourite monster. So, grab a tub of popcorn and watch these monster movies on OTT.

If you have watched Godzilla vs Kong and loved it, you will love Kong: Skull Island, its prequel, as well. A modern take on the classic King Kong, this film is about a crew who travel to Skull Island and encounter a giant, heroic ape. Other than a star-studded cast, and great visual effects, Samuel L. Jackson’s anger with Kong is one of the many highlights of this film. Watch this gem of a monster movie on the OTT platform Amazon Prime Video. This movie is basically every kid’s monster fantasy where the scariest of animals are infected with a pathogen that makes them enormously huge. It starts with a rat, and then spreads to a crocodile, a wolf, and a gorilla. And all three of these trying to climb a tall building in Chicago, so imagine that! On top of that, Dwayne Johnson petting a gorilla makes this monster movie a worthy watch. It is one of the best monster movies to stream on the OTT platform Amazon Prime Video. The best monster movies are the ones where hearing the monster roar is enough to give you goosebumps. Cloverfield is one such film where you don’t get to see the monster for the most part but rather the chaos it leaves behind. This movie uses a found-footage technique to give you a thrilling first-person perspective of the destruction going around. Stream this entertaining monster movie on the OTT platform Netflix. This is one of the classic monster movies that you shouldn’t miss. It follows the crew of a spaceship called Nostromo, which is invaded by the eponymous Alien. On its release, the movie was widely praised to the point that it spawned off an entire franchise of Alien films. It even won the Academy Award for Best Visual Effects in 1980. Watch Alien on Disney+ Hotstar with your friends. If you loved the 2019 Best Picture Oscar winner ‘Parasite’, you’ll definitely like this South Korean film as well, which is directed by the same person. In this film, a man tries to rescue his pre-teen daughter from an amphibious monster that has kidnapped her. Bong Joon-ho is a master at capturing grounded family dynamics, which reflects in this film. Watch this masterpiece of a monster movie on the OTT platform Netflix. 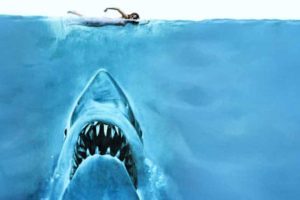 When it comes to making monster movies, only a few are as good at it as Steven Spielberg. Jaws is not just an excellent monster movie but one of the greatest films ever. This film was so scary that it made a simple man-eating shark appear like a monster. If you want to learn the art of making monster films, then, this monster movie is a must-watch (it is available on the OTT platform Netflix to stream). If you thought the shark in Jaws was not big enough, then check this film out. It has a gigantic shark named “Meg” that appears from the Marina Trench and starts terrorizing people. Jason Statham plays a rescue diver who is commissioned with killing this shark. Gripping through-and-through, this film will make you nervous about your next dive into the sea. Have fun watching this monster movie on Amazon Prime Video. Bored of the typical monster-horror film? Want something fun & heartwarming instead? Watch this animated film, then. It visualizes a world where monsters are employed to scare human children. It is a story like no other and the performances of John Goodman and Billy Crystal mirror that. Pick out a weekend, put on this monster movie on Disney+ Hotstar, and have a laugh or two with your friends. To end with a classic, here’s Jurassic Park, arguably the greatest monster movie ever. Based on a novel by Michael Crichton, this film is a cinematic masterpiece and well ahead of its time. It spawned off a number of sequels but none of them are as good. It’s the kind of monster movie that you watch again and again and again! You can stream this monster movie with your friends on both the OTT platforms, Netflix and Amazon Prime Video.

From sharks to apes to dinosaurs, all scary monsters have been covered here. Now, it’s your turn to go and watch all these monster movies.