50 Best Hindi Web Series: List of top Indian Web Series that you should not miss out – See Latest 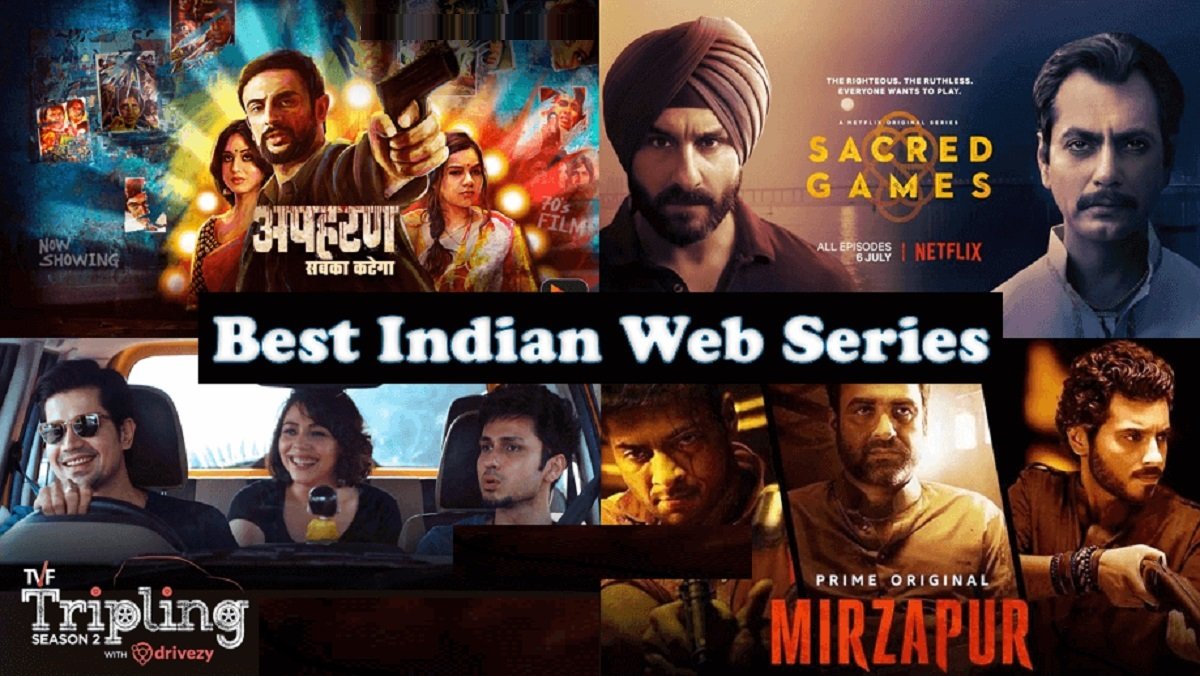 Jeet Ki Zid is a web television series that premiered on Zee5 on 22 January 2021. The seven-part series is directed by Vishal Mangalorkar. It is based on the life of a retired Indian Army special forces officer Major Deependra Singh Sengar played by Amit Sadh

Set in the 1980s and 90’s Bombay, follows the life of Harshad Mehta, a stockbroker who took the stock market to dizzying heights and his catastrophic downfall.  Based on the 1992 Indian stock market scam committed by stockbroker Harshad Mehta, the series is adapted from journalist Sucheta Dalal and Debashish Basu’s 1992 book The Scam: Who Won, Who Lost, Who Got Away.

An MX Player original, Hey Prabhu! is an Indian comedy-drama show revolving around the life of a common man named Tarun Prabhu. The show primarily focuses on the lives of the millennials and what they go through every day. The story of the show centralizes around Tarun and his unbelievable journey. Through his life, the show depicts the problems faced by millennials today in their professional as well as personal lives. Will Tarun be able to deal with it in order to come out on top? Or will he succumb to the rising pressure?

Hostages is an Indian Hotstar web series, which is directed by Sudhir Mishra. It is an official adaptation of an Israeli series of the same name. The series is streaming in seven Indian languages on Hotstar and stars Tisca Chopra, Ronit Roy, Parvin Dabas, Aashim Gulati, and Mohan Kapoor.

Avrodh the Siege Within is an Indian web series that premiered on SonyLIV on 31 July 2020. The series, directed by Raj Acharya and produced by Applause Entertainment and Irada Entertainment, is a retelling of the 2016 Uri attack and the following surgical strikes.

This web series is a police drama which will air on ZEE5. It stars Kaushik Sen, Sabyasachi Chakraborty and Sauraseni Maitra. Bollywood actor Ajay Devgan has shared the teaser of the crime thriller Lalbazar, which again shows his style.

Undekhi is an Indian crime thriller web series that premiered on Sony Liv on 10 July 2020. It is produced by Applause Entertainment & Edgestorm Ventures.

Divorced, jobless, hopeless. Three siblings plan a road trip together. Chandan, Chanchal & Chitvan. Together they start a hilarious journey, to find themselves and their relations.

Official synopsis- Naveen Sikhera makes his way into the sin city as the new       SSP, he is hit by the prevailing chaos and lawlessness in the city. Muzaffarnagar is ruled by the Shaukeen gang in the east and the Dedha brothers rule the west.

Mirzapur is all about two siblings Guddu (Ali Fazal) and Bablu (Vikrant Massey), who become involved with a universe of drugs, firearms, and viciousness after they get to know Munna (Divyendu Sharma), the child of Mafia supervisor Akhandanand Tripathi (Pankaj Tripathi).

Sartaj Singh (Saif Ali Khan) is a troubled police officer in Mumbai who receives a phone call from gangster Ganesh Gaitonde (Nawazuddin Siddiqui), who tells him to save the city within 25 days.

The Family Man is an Indian action drama web series on Prime Video created by Raj Nidimoru and Krishna D.K. Starring Manoj Bajpayee and Priyamani, it’s all about a middle-class man secretly working as an intelligence officer for the T.A.S.C, a fictitious branch of the National Investigation Agency.

Breathe is an Indian drama that explores the lives of ordinary men faced with extraordinary circumstances. Kabir (Sadh), a brilliant but non-conventional officer of the Crime Branch, puts the pieces together of seemingly unconnected deaths that lead to an unlikely suspect – the affable Danny (R. Madhavan).

Karan Khanna is a recovering alcoholic who, along with his counselor Tripurasundari Nagarajan, takes a detoxification trip to Mahabaleshwar. The story takes a turn when he attends his estranged daughter’s wedding with Tripurasundari Nagarajan and discovers why opposites truly attract. Will their romance blossom? Or will it be just another page in their contrasting lives?

Kota Factory is an Indian web series directed by Raghav Subbu for The Viral Fever (TVF). The series simultaneously premiered on TVFPlay and YouTube on 16 April 2019

Inside Edge is an Indian sports-drama web television series created by Karan Anshuman and released on Prime Video. It premiered on 10 July 2017 and is the first Hindi-language series distributed by Amazon Originals.

Should Read: Upcoming web series of 2020

Four More Shots Please! is an Indian web series on Amazon Prime Video, which directed by Anu Menon and Nupur Asthana. The series follows the story of four unapologetically flawed women as they live, love, make mistakes and discover what really makes them tick through friendship and shots of tequila in millennial Mumbai.

Hey Prabhu is an Indian web series and it’s all about the common man Tarun Prabhu and his unbelievable journey.

Bard of Blood is an Indian fictional spy thriller web television series based on the 2015 espionage novel of the same name by Bilal Siddiqi. Directed by Ribhu Dasgupta and produced by Red Chillies Entertainment, the series stars Emraan Hashmi.

Asur is an Indian crime thriller web series directed by Oni Sen and produced by Tanveer Bookwala for the video on demand platform Voot. The series stars Arshad Warsi and Barun Sobti. Arshad Warsi made his web debut in this series

Aarya is an Indian crime and drama best Hindi web series created by Ram Madhvani and Sandeep Modi. Starring Sushmita Sen in the titular role, and the web series is produced by Endemol Shine India and Madhavani’s Ram Madhavani Films.

Permanent Roommates is an Indian web series and this web series is created by The Viral Fever (TVF) and Biswapati Sarkar. The first successful Indian web show, This series revolves around a young couple, Tanya and Mikesh, who after being in a long-distance relationship for three years, face the prospect of marriage.

Little Things is an Indian web series, starring by Mithila Palkar and Dhruv Sehgal in the lead roles. The first season of Little Things released on YouTube and the later seasons released exclusively on Netflix.

Kaafir is a 2019 Indian web series, which directed by Sonam Nair. Written by Bhavani Iyer, the series follows Kainaaz Akhtar, a woman from Pakistan Occupied Kashmir (PoK) who winds up on the Indian side of the Line-of-Control (LOC), and is held prisoner under the suspicion of being a militant

TVF Pitchers is a web series created by The Viral Fever (TVF) and developed by Arunabh Kumar. The season finale premiered on TVFPlay on 30 August 2015. It follows four friends, Naveen, Jitu, Yogi, and Mandal, who quit their jobs in order to develop their own start-up company.

Three best friends looking for love laughs, and some lifelong memories while attending college together.

Hostel Daze is a Mini web series, which starring Nikhil Vijay, Adarsh Gourav, Shubham Gaur. Through the adventures of four friends ‘Hostel Daze’ captures what goes inside an engineering hostel in India.

Stories by Rabindranath Tagore is a 2015 Indian Hindi television series that aired on the EPIC channel. It is directed by Anurag Basu.

Flames is an Indian web series, which streaming on TVF Play. The story is based on a teenage romance from The Timeliners that aims straight from the heart. This web-series is the story of a young romance unfolding as a chemical reaction.

Rasbhari is an Indian web series, which release on Amazon Prime. A now matured Nand takes up the responsibility of saving Shanu from the ongoing witch hunt by the women of the town initiated by his mother, Pushpa.

Out of Love is an Indian series based on Doctor Foster by Mike Bartlett, adapted by Hotstar for its label Hotstar Specials. It is directed by Tigmanshu Dhulia and Aijaz Khan starring Rasika Dugal and Purab Kohli in lead roles. It premiered on Hotstar on November 22, 2019.

Girl in the City is an Indian web series, and This show is about a young girl who comes to Mumbai to live her dreams and aim at her aspirations. It is about her journey in the big city.