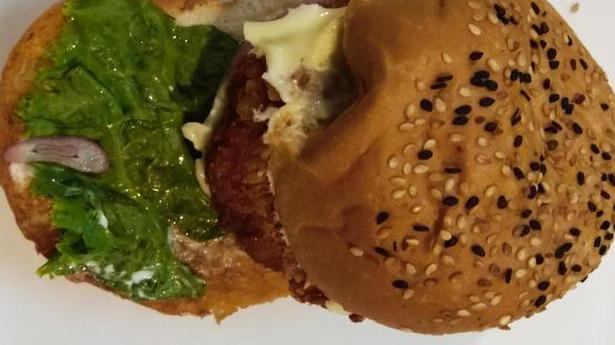 Some friends had been drooling over the burgers they had been preparing at home. They had got some soft, sesame seed topped buns, and ordered pork patties from Meatigo.

I began dreaming about this: creamy mayo slathered over a piece of bun, onion rings, perhaps a slice of tomato over it. A juicy patty on that, a crisp lettuce leaf and another soft bun on top. The problem was that we didn’t have any buns, and it was too late to have them delivered.

But burgers had been promised to two young people at home — one visiting Delhi for the first time. So, I turned to my good friend, the internet, and chanced upon a place called Boss Burger. I liked the different kinds of burgers it offered, and was further encouraged by the fact that it has branches across the city. With the help of Swiggy, we placed our order.

The youngsters like chicken, so for them we asked for two OG Chicken Burgers (₹518 for two). They are also fond of hot food, so we added a Crispy Peri Peri Chicken Burger (₹299). A Crispy Fish Fillet Burger (₹349) and what seemed rather interesting — a Mutton Ghee Roast Burger (₹369).

The burgers arrived just when the mice in the stomach had started kicking up a real shindy. The boxes were encouraging — strong, well packed cartons, which contained the burger, as well as sauces and napkins. Without much ado, we got down to business.

The young ones were happy with their burgers — brioche wrapped around melted cheese and chicken topped with a hot sauce. The hot peri peri chicken was even better. The chicken and cheese patty had been doused with garlic aioli and a spicy sauce. The fish fillet burger, which came with tartar sauce, was disappointing. The patty was crisp from the outside, but sadly soggy within.

My mutton ghee roast burger, however, was delicious, with its fusion flavours. The patty had been prepared in the Mangalorean style — slow cooked and then garnished with curry leaf flavoured mayo. It had a taste of soft onions that I really liked, and, overall, the patty cooked with Indian spices went rather well with the soft, bland buns.

My last happy burger meal was when I had ordered in from Aku’s, which has some outstanding burgers with blue cheese, wild mushrooms, jalapenos, caramelized onions and more.

Meat lovers can have its Truffled 3 Cheese Tenderloin Burger (grilled tenderloin and cheese patty, topped with truffled aioli and pickles, served in a sesame brioche bun) and a Chicken Tikka Burger. There are fries, chicken nuggets, wings and various kinds of shakes on the menu.

All in all, we had a nice meal, indeed. But now I need to order in some buns and patties. Nothing like a DIY burger.