Shilpa Aravind : We did what we knew best — make a film 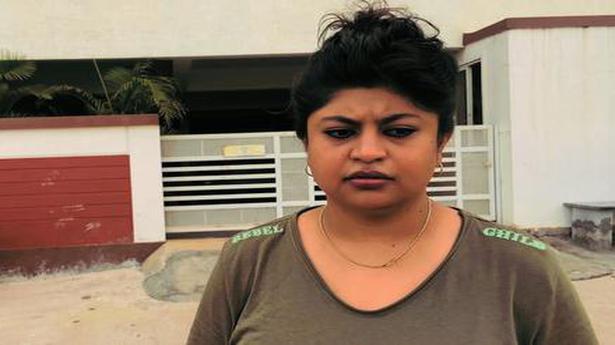 Aravind Kaushik and his wife, Shilpa, used the lockdown to create a four-part web series

A director, his wife and a lockdown — seems like the ingredients for a dark tale. Aravind Kaushik and his wife, Shilpa, felt trapped during the lockdown. To pass the time and to keep their creativity flowing, the couple decided to write a short film, Dog Doll Watermelon, which explores the dark side of human relationships.

They shot the film at home, using household furniture as props — pillows, tables, chairs, lights and mobiles. They cast themselves in the film, says actor and writer Shilpa. “We shot each other’s portions on our mobiles. Once we were done with the shoot, we realised that the story could be a four part web-series.

The show will be launched on the couple’s YouTube channel, Black Ticket Studios on Ugadi, April 13. The teaser, which was released a few days ago, is ironic in tone, poking fun at the characters.

“Aravind narrates stories and shares his ideas with me,” says Shilpa. “We hit upon the idea for Dog Doll Watermelon. As the movie progresses, the dog and watermelon become more important than the leads.”

Shilpa says they did not face any challenges while making the film. “We had ample time on our hands. While some took to cooking and other hobbies during the lockdown, we took to what we knew best — making a film. We breathed cinema during the lockdown too, thanks to this series that we could work on.”

Shilpa is a trained Bharatanatya and Kuchipudi dancer (a student of Manju Bhargavi and Shobha Naidu), who also worked as a programme producer for a television channel in Bengaluru. “I had invited Aravind for an interview for the channel when love struck and we soon found ourselves married,” she says with a laugh.

A BCA graduate, Shilpa gives Aravind credit for inculcating a love for cinema in her. “Till then I watched films just for entertainment,” says the actor, who has also worked in theatre (with the troupe Abhinaya Taranga) and with Prakash Belawadi during college days. Besides that, Shilpa has also acted in serials including Anuroopa (Suvarna TV) and Noorentu Sullu (ETV).

This is the first time she is sharing the screen with her husband. They are all set to release their feature film, Steel Paathre Saaman. “We will wait and watch for the effects of the pandemic on theatre occupancy before taking a call.”