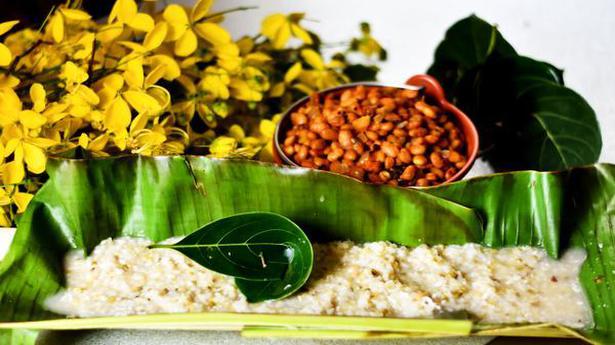 Ahead of Vishu 2021, we examine the popularity of ‘Vishukkanji’ and ‘Vishukkatta’ and how they are prepared at different households in the northern Kerala

Golden yellow blooms of kanikkonna or Indian laburnum herald the arrival of the festival of Vishu in April. Vishukkani, the tradition of opening your eyes to witness the bounty of Nature, gold and God and the practice of receiving money from elders as Vishukaineetam are all integral to the festival. Then, of course, the joy in bursting crackers and feasting on the sadya.

The festival has many regional variations. The celebrations are at its zenith in northern Kerala. Vishukkanji and Vishukkatta, for instance, are prepared only on the day of Vishu in those regions. If Vishukkanji, a gruel with rice and coconut or coconut milk is special for Palakkad and some parts of Kozhikode, Vishukkatta or rice cake cooked in coconut milk is a speciality of Thrissur district.

Even the kanji has its variations. “The simplest method is cooking unakkalari (raw rice with bran) and adding a generous amount of grated coconut to it at the end. We have it with a stir-fried curry, generally prepared with puliyavara (butter beans or Lima beans),” says Vishnukumari A, a native of Kannambra in Palakkad, now settled in Kannur.

The popular preparation of kanji has puliyavara and split green gram cooked with any variety of rice, such as puzhukkalari (red rice), pachari (raw rice) or Ponniyari (full-boiled rice). Both puliyavara and green gram are dry roasted. The former is pounded so that the outer skin, which is hard, comes off. If you are using whole green gram, it is better to pound it after dry roasting the same.

“Kanji won’t be tasty if the skin is not removed. It can cause indigestion as well. We keep puliyavara as one of the items in the Vishukkani and the same beans is used in the gruel,” says Lakshmi Kutty PP, a homemaker from Kallekulangara in Palakkad. Cumin, ghee or pepper can be added to up the taste of the gruel. “If jackfruit is available, we make puzhukku (raw jackfruit cooked with coconut paste and spices) as the side dish,” she adds.

Vishukkanji is usually served for breakfast on the festival day. “In our tharavadu (ancestral home), it is served from 10.30 am onwards and is had for lunch as well. We don’t prepare the sadya,” says Manjula Jyothiprakash, a YouTube food blogger (Spicy ‘N’ Easy) from Alathur in Palakkad.

“I use both pachari (raw rice) and Ponniyari in equal quantities. Although some people cook the rice in coconut milk, I find it more tasty with grated coconut. In our house, we have stir-fried puliyavara as the side-dish. For this, the puliyavara has to be soaked overnight. Pappadams and rice kondattam (rice fritters) make it an even more tastier spread,” says Manjula.

However, neither puliyavara nor green gram figure in the gruel prepared by Kozhikode-based Hemalatha Chandran. “I use nellu kuthari (par-boiled rice). Once the rice is almost cooked in water, ground cumin is mixed to it. Then coconut milk is added (first add second extract or randaam paal followed by the thick first extract or onnaam paal) and boiled. Add salt and adjust the consistency. It is more like a jeeraka (cumin) kanji,” she says. The side-dish is stir-fried raw banana and long beans.

Vishukkatta is made with pachari. It is cooked in randaam paal and water. “Once the rice is cooked and water dries, salt and the thick onnaam paal is added. Keep stirring it until it reaches the consistency of halwa. Grease a plate with some coconut milk and transfer the preparation on to it. Once it cools, it can be cut into pieces,” says Anitha Hari from Edamuttam in Thrissur. A breakfast or pre-lunch dish, it tastes best with jaggery syrup. “ We also have it with inji puli (tangy dish made with ginger, tamarind and jaggery),” she adds.

Karayappam, a different version of unniyappam (deep-fried dumpling with rice flour, banana and jaggery) is made in parts of Kannur on Vishu day. “It has sugar instead of jaggery and is slightly bigger than the unniyappam. It is an offering for the deity when we arrange the Vishukkani,” says Indira Jayadas from Vadakara.

Although the Vishu feast is usually a vegetarian affair, non-vegetarian dishes are also served in several households. Pork is a favourite in some families in Thrissur and Ernakulam. In some parts of Palakkad district, a meat dish (chicken or mutton) with ash gourd is prepared on the next day of Vishu. “Meat masala and fish fry are a must on the leaf! As in the case of Onam, we begin the sadya with pazham-pappadam kuzhachathu (a mix of mashed banana, sugar, pappadam, ghee and nuts). Cherupayar parippu (split green gram) pradhaman is the payasam of the day,” says Indira.