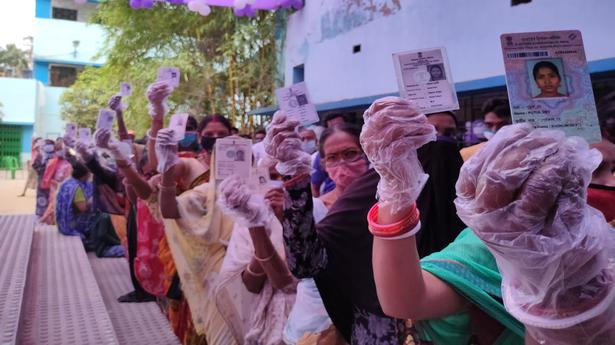 The electoral fates of Union Minister Babul Supriyo and West Bengal ministers Partha Chatterjee and Arup Biswas will be decided today when votes will be cast for the fourth phase of the high-octane poll in West Bengal, for which is stage is set.

Two MPs of the BJP are also in the fray for the April 10 poll when elections will be held in 44 seats covering Cooch Behar and Alipurduar districts in north Bengal and parts of South 24 Parganas, Howrah and Hoogly in the southern part of the state.

Babul Supriyo will lock horns with sitting MLA Arup Biswas at Tollygunj, known to be the heart of the Bengali film industry in the southern outskirts of Kolkata, while Partha Chatterjee, who is also the TMC’s secretary general, will take on film actor Srabanti Chatterjee of the BJP in Behala West seat to return to the Assembly for the fourth successive term.

Also in the fray on Saturday is TMC turncoat Rajib Banerjee, a former minister of the Mamata Banerjee cabinet, who will contest from Domjur in Howrah district on a BJP ticket. He, along with fellow turncoat Suvendu Adhikari, has been the focus of stinging attacks by the TMC supremo who called them “gaddars” (traitors) and Mir Jafar and attacked them in almost every election meeting.

Here are the live updates:

More instances of violence are being reported at Sitalkuchi Assembly segment in Cooch Behar.

Chilli powder was thrown at a CPI(M) agent in a polling booth in Gangulybagan in Jadavpur Assembly seat in southern parts of Kolkata.

One person was killed when miscreants opened fire at people waiting in a queue to cast their vote. The deceased was identified as Ananda Barman, 18.

Prime Minister Narendra Modi urged that votes be cast in record numbers in the fourth phase of the West Bengal elections on Saturday.

“As the 4th phase of the West Bengal elections begin, urging the people voting today to do so in record numbers. I would especially request the youth and women to vote in large numbers,” he said in a tweet soon after the polling began.

COVID-19 protocols being maintained at the polling booth in 157-Metiaburuz AC in West Bengal on April 10, 2021.

PTI reports that officials said voting is under way with strict adherence to COVID-19 protocols in all nine seats in Howrah district, 11 in South 24 Parganas, five in Alipurduar, nine in Cooch Behar and 10 in Hooghly.

The Election Commission has deployed 793 companies of Central armed security forces for 44 seats in the fourth phase of Assembly polls in the State.

Among those contesting in the fourth phase are senior Trinamool Congress leader and Education Minister Partha Chatterjee from Behala Purba and Public Works Department and Sports and Youth Affairs Minister Aroop Biswas from Tollygunj in South 24 Parganas.

Minister for North Bengal Development Rabindranath Ghosh is in the fray from Natabari in Cooch Behar and Minister for Agriculture Marketing Arup Roy is contesting from Howrah Madhya.

Three BJP MPs are contesting the Assembly polls in this phase. Babul Supriyo, MP from Asansol, is locked in a bitter contest in Tollygunj against Mr. Biswas, while Locket Chatterjee, MP from Hooghly, is contesting from Chinsurah in Hooghly district. Cooch Behar MP Nisith Pramanik is contesting from Dinhata. Another key BJP candidate is a former Minister in the Trinamool government, Rajib Banerjee, who is contesting from Domjur in Howrah.

The other Trinamool MLAs who are in the fray as BJP candidates include Prabir Ghosal from Uttarpara in Hooghly, Baishali Dalmiya in Bally, and Mihir Goswami from Natabari in Cooch Behar.

In the Singur Assembly seat in Hooghly, which has witnessed a lot of political activity in the past two decades on the issues of land acquisition, return of land and the promise of industry, former Trinamool MLA Rabindranath Bhattacharya is contesting on BJP ticket. 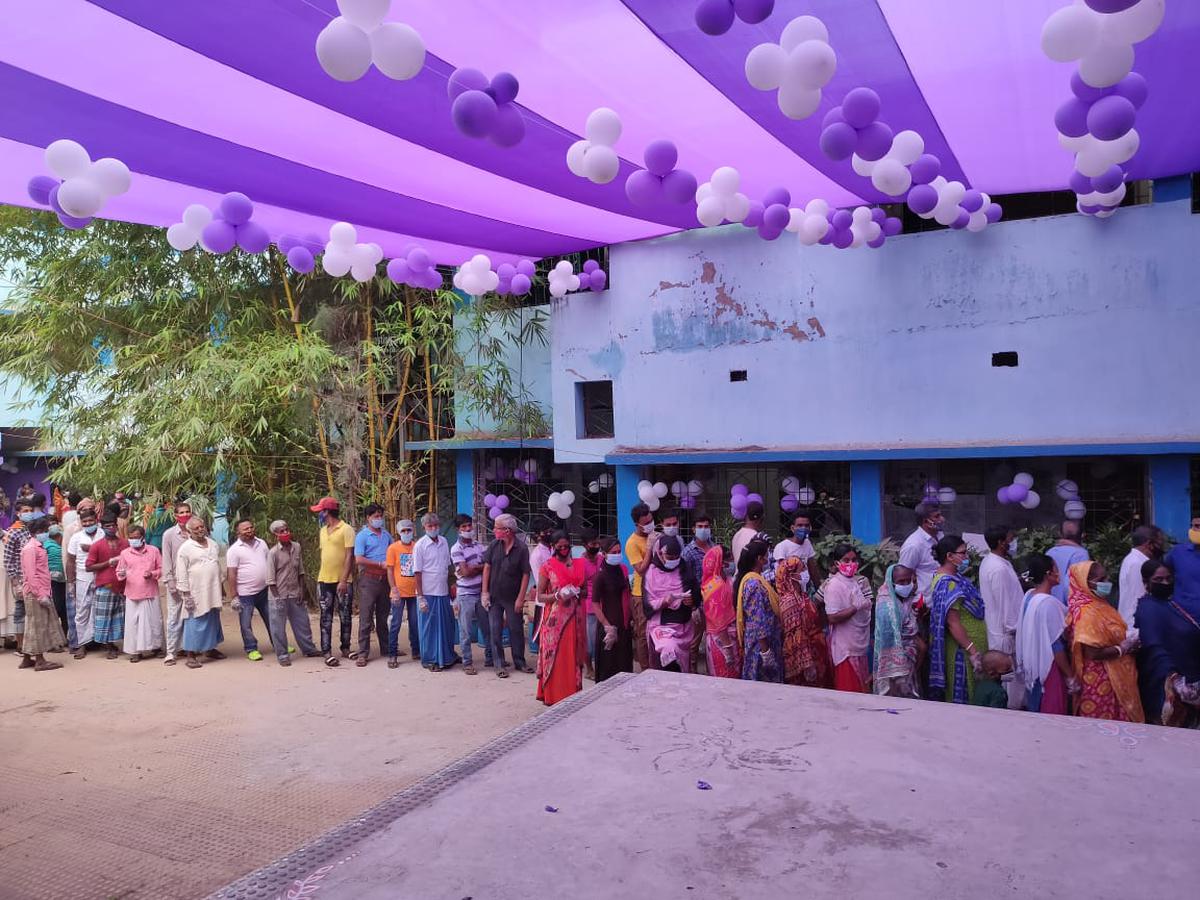 Voters queue up outside a polling booth in Metiaburuz AC in West Bengal on April 10, 2021.

Polling began at 7 a.m. for 44 seats in the fourth phase of the West Bengal assembly elections amid tight security, officials said.

Long queues were seen outside polling stations where voting will continue till 6.30 p.m.

Over 1.15 crore voters are eligible to exercise their franchise to decide the fate of 373 candidates

Interview | Those who believe in democracy support the Samyukta Morcha: Adhir Ranjan Chowdhury

The Samyukta Morcha is providing a real alternative to the people of West Bengal against the competitive communalism of the BJP and the Trinamool Congress, says West Bengal Pradesh Congress president Adhir Ranjan Chowdhury, who has played a crucial role in forging the alliance of the Congress, the Left and the Indian Secular Front. The Congress is contesting 92 seats.

Campaign bells fell silent on Thursday evening for the fourth phase of election in West Bengal.

The political campaign in West Bengal got shriller with Trinamool Congress chief Mamata Banerjee and senior BJP leaders, including Home Minister Amit Shah, keeping up a barrage of attacks on each other.

Ms. Banerjee on Friday alleged that there could be a plot to “assassinate her”. Addressing a public meeting at Memari in Bardhaman, she said, “Amit Shah how much money you have. You are spending crores .. From where you have got so much money? After I have said this, I know there can be plot to assassinate me. They have injured my leg; now there can be a plot to assassinate me. I don’t care. As long as I am alive, I will keep raising the issues.”

Keeping up the political temperature, senior BJP leaders including continued to target the Trinamool Congress chairperson in their campaigns.

“I have never seen a Chief Minister or party chief use words Mamata Banerjee is using against central forces in my entire political career. Is she trying to create anarchy,” Mr Shah said, addressing journalists in Kolkata.

Polling officials check EVMs and other materials at a distribution centre, on the eve of fourth phase of West Bengal Assembly polls, in Kolkata on April 9, 2021.
| Photo Credit:
PTI

A report by the Association for Democratic Reforms (ADR) said 22% of the candidates in the fray for phase-IV of the West Bengal Assembly elections had declared pending criminal cases in their election affidavits.

In its analysis of affidavits of 372 of 373 candidates from 44 constituencies, ADR found that 17% of them had serious criminal cases.

The average assets of the candidates was ₹92.34 lakh, while 17% of them had assets over ₹1 crore. The complete affidavit of one candidate was not available, ADR said, releasing its findings on Saturday.

The report said 61% of the 44 BJP candidates, 73% of the 22 Communist Party of India (Marxist) nominees, 22% of the nine Congress candidates and 39% of the 44 Trinamool Congress analysed had declared criminal cases.