Over 11,000 books in poor man’s library destroyed in Mysuru 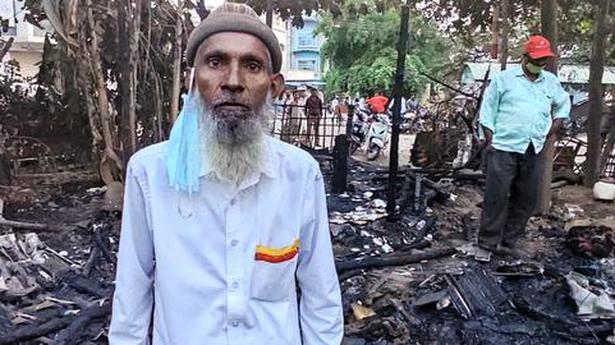 The destruction of a library with over 11,000 books, painstakingly collected by Syed Ishaq from his meagre earnings, in fire here in the early hours of Friday has not only drawn widespread condemnation, but also triggered efforts by civil society to help him rebuild his dream of spreading knowledge.

Mr. Ishaq, a daily wager, had collected a variety of books in different languages, including general knowledge books and religious books such the Bhagavad Gita, the Bible, and the Koran in Kannada, which he made available for residents of Rajiv Nagar locality to read on the premises of the library situated on government land.

Though unlettered himself, Mr. Ishaq, 63, had a lot of respect for books. “Out of his meagre earnings, he used to subscribe to 22 daily newspapers to his library for the benefit of the locals,” said Khaisar Safdar, a journalist with an Urdu daily who often visited the library set up in 2011.

Mr. Ishaq, who earns a living by doing odd jobs, including cleaning drains, was so passionate about spreading knowledge that he would himself sweep the library every day and maintain a register of visitors.

Mr. Ishaq suspects miscreants who were opposed to his propagation of Kannada language to be behind the wicked act. “It is the handiwork of enemies of Kannada. They conspired to destroy the collection of books,” said Mr. Ishaq, who has lodged a complaint with the Udayagiri police.

Deputy Commissioner of Police (Law and Order) Prakash Gowda told The Hindu that they have registered an FIR based on Mr. Ishaq’s complaint. Preliminary inquiries had revealed that his activities were not liked by a few people and there had been efforts earlier to destroy the library.

Muzaffar Assadi, chairman of the Department of Political Science, University of Mysore, said the act of destroying a library set up by a poor man in and around slum areas for the purpose of inter-faith dialogue and disseminating knowledge was condemnable. “I have made an appeal for books rather than money because we have to send a signal to the perpetrators that knowledge cannot be destroyed,” he said. Already, Mr Assadi said, his appeal had elicited response from different parts of the country including Gurgaon, Tamil Nadu, and Maharashtra.

Meanwhile, a team of representatives from the People’s Union of Civil Liberties in Mysuru too visited the premises on Saturday.