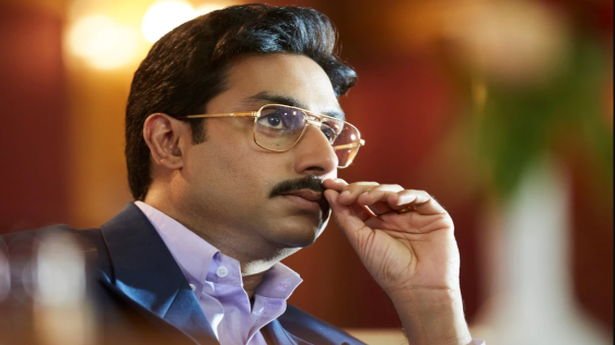 Despite Abhishek Bachchan’s best efforts to portray the fallen stalwart of the Bombay stock exchange, the film comes across as a drab attempt to glorify its problematic protagonist

The story of Harshad Mehta and his involvement in India’s first major financial fraud has captured the imagination of today’s burgeoning middle-class. His audacious acts of blatant financial skulduggery are as repulsive to some, as they are effective conduits of vicarious thrills to others.

And yet, the new movie on the fraudster by Kookie Gulati, which claims to be “somewhat inspired by true events”, evokes a different set of emotions from its audiences — that of bewilderment at its comical discrepancies initially, followed by disappointment.

Case in point, the scene where Gulati’s version of Mehta — Hemant Shah (Abhishek Bachchan) — while trying to use the calculator, breaks into bouts of maniacal laughter after pointing out to his brother Viren (Sohum Shah), something that leaves us all startled.

Turns out, the ‘Big Bull’ is amazed that, while calculating his huge profits margins, the calculator is unable to fit the number of zeroes in the final figure onto its small screen. Such fatuous set-pieces coupled with a meandering screenplay, not to mention the incessant need to glorify its problematic protagonist, makes The Big Bull a tedious watch.

The fabrication of facts to make the lead character more likeable, especially by portraying him as a messiah for the middle-class, is another objectionable element that plagues the entire production. Drowning out the actual atrocities committed by Harshad Mehta by using corny phrases like “the one and only big bull” is annoying yet hilarious at the same time.

And despite that, Abhishek Bachchan in his efforts to bring to life, the fallen stalwart of the Bombay stock exchange, comes across as earnest, even believable… but not for long.

Soon enough, Ritesh Shah’s uninspired dialogue writing catches up with the proceedings, reducing the limitless potential of the endeavour. The resultant cinematic offering is a drab mishmash of trope-laden storytelling, laying the groundwork for some ludicrous moments on screen, which are authentic in their inauthenticity.

One cannot help but compare it with last year’s Scam 1992: The Harshad Mehta Story, which, unlike this movie, didn’t have the luxury of using fictitious names for familiar characters, to stitch together a radically-altered narrative. And yet, the sheer difference in writing for both the pieces stand out in their stark differences in quality.

The former’s diligent attempts at stacking together a coherent narrative only highlights the drawbacks of the breakneck pace at which The Big Bull unravels its plotline. To top it off, deficiencies in character development plays a major role in stifling the organic build-up of its main story.

Take, for instance, Ileana D’Cruz as Meera Rao (based on real-life scribe Sucheta Dalal). Instead of her character offering an insight into the world of Indian journalism, she appears to be a mere ornamental presence, serving as a lustreless narrative device.

The likes of Sohum Shah and Nikita Dutta look jaded too as they try to bring to life characters who are entirely driven by their interaction with the lead figure. Saurabh Shukla and Mahesh Manjarekar though light up the screen with their magnetic yet fleeting presence.

Meanwhile, Hemant Shah’s pursuit of his love interest with Nikita Dutta’s character also comes across as forced and unnecessary, culminating in a cringey romantic number that feels out of place.

The two-and-half hours runtime seems never-ending, all the while refusing to embark on a nuanced cinematic inquiry into the psyche of a high profile fraudster. Its attempts at deconstructing complex financial concepts behind the many crimes of its protagonist are mediocre at best, drowning the story in juvenile frivolities.

The telling and retelling of Harshad Mehta’s story point out Indian popular culture’s unhealthy obsession with the act of frenzied and unprincipled money-making, especially in the post-liberalisation era. Something which Hansal Mehta tapped into deliciously, but Kookie Gulati seems to have missed out on.

Thus, despite The Big Bull’s earnest attempts at coming across as a serious drama piece, it ends up locking horns with some basic tenants of logic and practical filmmaking, serving as a cautionary tale for patrons of nuanced storytelling.

The Big Bull is currently streaming on Disney+ Hotstar