How Yakshagana is adapting to modern times 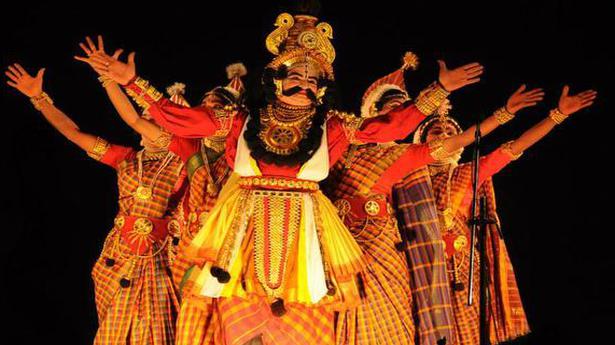 They say the preparation for the journey into the spotlight happens in the green room. It couldn’t have been truer in the case of Shivananda Hegde. On February 3, 2009, when he walked into the green room, he was unaware of the huge responsibility that he would be bestowed with.

His father, the renownded Yakshagana artiste Shambu Hegde, had suffered a heart attack during a show and summoned his son to the green room to crown him successor. On the stage, just minutes before, Shivananda had played Shatrugna while his father played Rama in Lava-Kusha Kalaga that was being performed at Idagunji Mahaganapathy temple.

According to Yakshagana tradition, the lead actor’s crown must be personally handed over, failing which the crown cannot be worn by the successor. It is like a coronation ceremony. The Idagunji Yakshagana troupe has been performing consistently at the temple for several years, and Hegde thinks it was truly a miracle that his father’s last performance also happened at the temple.

Yakshagana literally means, “song of the yaksha (demi-gods/spirits) and the mela or troupe consists of two main parts: the mummela (foreground actors) and the himmela (singers and instrumentalists in the background). It is a theatrical art form of Karnataka, originally an all-night performance where the mela travelled from one village to another with shows being held in the open air.

The bhagavatha, part of the himmela, is the lead singer and narrates the story through songs, while the dancers/actors (mummela) enact the stories drawn from the Ramayana, the Mahabharata and the puranas. On the day of the performance, the artistes construct a makeshift stage with a chauki (green room), and the raja kirita (lead character’s crown) is placed at the entrance to the green room. The singers occupy a raised platform at the back of the stage while the audience sits all around the stage, looking up at the actors.

Every important character is introduced by lifting the theray (screen), which prepares the audience for the actual moment when these larger-than-life characters will emerge on stage in all their grandeur. The ornate costume conists of kirita (headgear), kavacha (armour), bujakeerti (armlets and shoulder bands), and dabu (belts) — all made of lightweight wood and covered with golden foil. The smaller roles get simpler costumes and make-up.

Shivananda comes from a family of traditional Yakshagana artistes. When he was 12, he was initiated into the art by his uncle, Gajanana Hegde. He balanced school and Yakshagana training, and the first role he played was of Abhimanyu. He began with small roles and moved on to meatier ones as he got better in dialogue delivery, absorbing the nuances and interpreting characters.

Though he belonged to the North Kanara style, he also learnt the other variations which helped him to get a deeper understanding of the art form. After graduation, he trained in choreography under Guru Maya Rao.

Yakshagana requires the artiste to first train his voice to align to the sruti of the bhagavatha, and training begins with the learning of the seven talas and seven adavus, understanding rhythm with exercises in percussion, and a study of the scriptures. The students then specialise in an area of their interest — either singing, percussion or dialogue delivery. Thus, whether mummela or himmela, the artistes get an immersive training.

After this, players ascend the stage with purva ranga, doing small roles such as patra pravesha or the hunter dance before graduating to bigger roles where they are trained to use mudras, eye movements and expressions, and stances for various characters. Interestingly, to understand lasya, Yakshagana artistes have to don the stree vesha.

Shivananda says Yakshagana is holistic learning. One has to be self-reliant — donning make-up and costume oneself. “Dialogue delivery is the trickiest part,” says Shivananda. “Lines cannot just be memorised and delivered. The artistes have to read the scriptures and epics to understand the characters. It is here that an artiste’s individuality is put to test, where with each performance he seeks newer meanings and interpretations. They must move with the times, understanding the need to respect change in the light of tradition.”

Though performances were originally staged as all-night shows, this changed with time, especially when they began performing abroad. The dialogues have been shortened too. The dialect varies depending on the place of performance. “But all this has happened without compromising on the four core elements — angika, vaachika, aharya and satvika. When we perform outside Karnataka, we connect with the audience more through emotion and aharya,” says Shivananda.

The performer has introduced vigorous movements and synchrony in group dances. He avoids deeply philosophical stories, preferring the more popular and familiar ones. One of the main changes he has brought about is to give small roles to the artistes who hold the screen to introduce the main characters. He has also revived some forgotten traditional costumes.

To take the art beyond the barriers of caste and religion, Shivananda came up with dialogues with universal appeal. “We remove objectionable dialogues that may be considered social evils today,” he says.

Speaking of the long journey of Yakshagana and the hard times his father and grandfather faced, Shivananda says that Shambu Hegde was initially not in favour of his son pursuing the art form. But seeing Shivananda’s passion, he prepared him to carry the mantle.

The artiste was in Chennai recently to receive a lifetime achievement honour from Dakshinachitra. At a time when artistes are struggling and it has been a challenge to keep the gurukula running, Shivananda says the award has enthused him to tell his stories with renewed vigour.

The author is a Chennai-based freelance writer.