China is capable of launching cyberattacks on us: Rawat 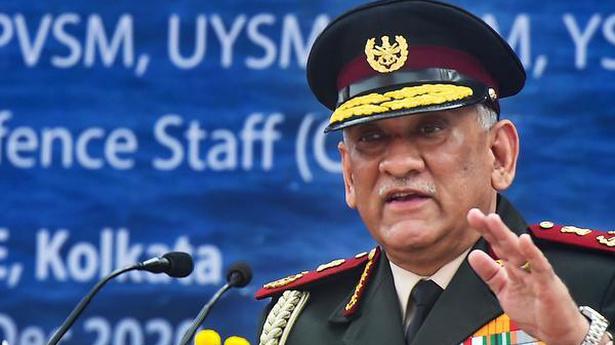 There is a capability differential between India and China, says Chief of Defence Staff

Accepting that there is a capability differential between India and China, Chief of Defence Staff (CDS) General Bipin Rawat on Wednesday said the biggest differential lies in the cyber field and China is “capable of launching cyberattacks on us and it can disrupt a large number of systems”.

On Afghanistan, he said they were keeping their eyes and ears open and “making sure that we are not out of the bandwagon”.

“We may not be able to fully catch up with China. So, we are trying to develop some kind of a relationship with western nations and see how better we can get some support from them during peace time at least, which will help us overcome this deficiency,” Gen. Rawat said while speaking at a webinar by the Vivekananda International Foundation (VIF).

What they were trying to do was create a system that would ensure cyber defence, he said, adding that they created a cyber agency within the Armed forces. Gen. Rawat said each service also had its own cyber agency, so that even if they come under a cyberattack the “downtime of the attack doesn’t last long”.

“We should be able to overcome that cyberattack and continue with our systems either through alternate means… While we are trying to create firewalls for cyberattacks, we are quite sure they will be able to break through the firewalls and we will have cyberattacks,” he added.

“What we are trying to do is to see how long the systems would be down and how we will be able to operate through the phase of cyberattack that we have been put through. That is what we are seriously looking at,” he stated.

This differential could be overcome only if resources of the three services were integrated, Gen. Rawat said.

Stating that they were watching from close quarters as “we have a lot of stake in Afghanistan”, Gen Rawat said, “We are watching the situation very carefully.”

“ We are keeping our eyes and ears open. We are making sure that we are not out of the bandwagon and that we understand what is happening in that nation,” he said.

“Anything that evolves there, we will be on-board and we will make sure that our national interests are not compromised,” he said.

He added that the Afghan people had a lot of respect and regard for Indians and to that extent they themselves “would not want India to be left out”. “So I think our security interests will get considered,” he added.