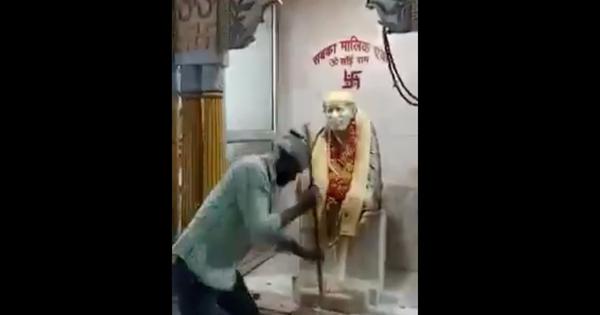 Some residents of Delhi have filed a complaint against the demolition of a Sai Baba idol at a temple in Shahpur Jat locality of the city.

The police were yet to register a first information report, but said they were investigating the case. “A few Sai Baba devotees from across the city filed a complaint stating that their sentiments have been hurt by the removal,” Deputy Commissioner of Police Atul Kumar told The Indian Express. “We are looking into the matter.”

As reported by Scroll.in, the idol was removed from the Purana Shiv Mandir in Shahpur Jat on March 25, after a religious leader from Ghaziabad claimed that Sai Baba, a spiritual leader revered by Hindus, was a Muslim. A new idol of Hindu god Ganesh was installed in its place.

A series of videos showing the demolition of the idol surfaced on social media last week. In the videos recorded inside a temple, a middle-aged man dressed in a pale-blue shirt could be seen overseeing the demolition.

In another video, the same man, in a white shirt and saffron stole, is seen seated next to Yati Narsinghanand Saraswati, the Hindu priest from Ghaziabad. Saraswati congratulates and blesses him for “breaking and throwing away” the idol of “pakhandi Sai” – fraudster Sai. “If I had my way, jihadis like Sai won’t be able to enter temples,” he says.

The complaint was filed by nine residents of Shahpur Jat at the Hauz Khas police station on March 31. It stated that a few people broke the idol of the saint while saying “remove the idol of this man as he is not a Hindu god and belongs to Muslims”. The complainants sought police action against the culprits, and demanded that the Sai Baba idol be reinstated in the temple.

“Whoever has complained does not live there [Shahpur Jat], we are all devotees of Sai Baba,” Sunil Sareen, one of the nine complainants, told Scroll.in.

Sareen said the Hauz Khas police initially refused to register the complaint. “We went there, police said they did their enquiry and there was no such thing and do not give it a communal colour, and that the idol was damaged,” Sareen said. “We then showed him the videos, he was not ready to listen. Then we showed him another video where the trustees of the temple were bragging about it.”

The police told Sareen that they will enquire into the matter. “But we have not heard anything after that,” he said.

On April 1, station house office Akshay Kumar Rastogi had told Scroll.in that he had not received any complaint regarding the incident.

While a member of the temple committee claimed the idol had been removed on March 25 because it was broken, many residents of the neighbourhood, who are devotees of Sai Baba, rejected this explanation and expressed shock and grief at the demolition.

The middle-aged man who supervised the demolition, Padam Panwar, distanced himself from it. But Saraswati exulted in it. “Sai Baba was a pindari lootera [lawless raider],” he told Scroll.in over the phone. “His name was Chand Khan. He was a jihadi. It is the madness of our Hindus that he is now in our temples.”

Saraswati is the chief priest of the Dasna Devi Temple in Ghaziabad and the leader of an organisation called Hindu Swabhiman – or Hindu self-respect.

The hardline Hindu leader is known for his rabble-rousing tendencies. On Sunday, the Delhi Police registered a first information report against him for allegedly hurting religious sentiments by making derogatory remarks about Prophet Mohammed and Islam at the Press Club of India.

A report in the Quint described him as the “one of the shrillest voices in the Hindutva ecosystem”, and said that Saraswati has been raising communal temperatures in western Uttar Pradesh by calling for a “final war against Muslims”. In March, a 14-year-old Muslim boy was assaulted by two men for drinking water in Saraswati’s temple in Ghaziabad.