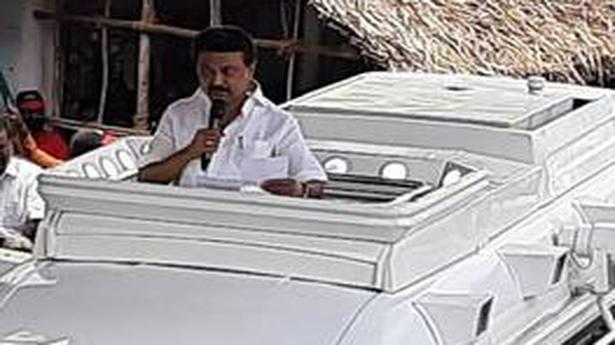 People’s resurgence is higher this time than in 1971 and 1996 elections, DMK chief says.

DMK president M.K. Stalin has said Tamil Nadu people are keen on a change and the performance of the DMK-led alliance will exceed the predictions and the coalition will win all 234 seats.

In an interview to The Hindu, he said people were angry because the AIADMK government had pushed the State and the people into darkness and brought shame to Tamil Nadu in the past 10 years. “They came to the conclusion long ago that they did not want a government that could not protect Tamil culture, tradition and language. I have seen many electoral battles, and I see the people’s resurgence is higher this time than what it was in the 1971 and 1996 Assembly elections. They see the DMK as a morning star,” he said.

Mr. Stalin said he was able to see a wave against the AIADMK government and its allies, and they would certainly be defeated.

Asked whether such a brutal majority could deny the Opposition a space and have an adverse impact on democracy, Mr. Stalin said that if people chose to prevent the entry of the AIADMK into the Assembly because it had destroyed the State’s economy, industry and finances, it would actually be an advantage for democracy.

“The DMK will use the verdict to develop the State by ensuring democracy in the Assembly, honesty and transparency in government, priority to welfare schemes and employment opportunities for the youth. In the past, the DMK government, led by Kalaignar, had functioned in a similar manner and built infrastructure,” he said.

To a question on prohibition not finding a place in the DMK’s manifesto, Mr. Stalin said the objective was to increase the buying capacity of women, the middle class and the poor and improve the State’s socio-economy and education.

“Women have borne the brunt of the increase in the prices of petroleum products. The price of milk has increased to ₹43 [a litre] from ₹17 under the DMK government. People lost their livelihood and buying capacity during the COVID-19 pandemic. Economists say the need of the hour was to increase their buying capacity. So we have promised ₹1,000 for housewives and ₹4,000 in pandemic relief. I promised to bring down the prices of petrol and diesel by ₹5 and ₹4 [a litre] respectively and milk price by ₹3. I have also announced ₹100 in grant for every gas cylinder,” he said.

Was priority accorded to Hindu temples in the manifesto as a means of retaining the Hindu votes? Mr. Stalin replied that the DMK had never been against the interest of the Hindus.

“There is a false campaign against the DMK because it fights for the social justice for the majority of the Hindus. It was Kalaignar who ensured that the car of the Tiruvarur Thiyagarajaswamy Temple was run and the DMK government conducted ‘kumbhabhishekham’ at 4,724 temples at a cost of ₹523 crore. It also gave cycles to 10,000 temple priests. The election promises of ₹1,000 crore for ‘kumbhabhishekham’ and ₹1 lakh for pilgrimage are a continuation of the DMK’s contribution to temples,” he said.

Asked about exempting Tamil Nadu from NEET, Mr. Stalin said he had already promised to adopt a resolution in the first session of the Assembly. “All efforts will be made to get the President’s assent. In the past, we have cancelled the entrance examinations and got the assent of the President and an approval from the Supreme Court,” Mr. Stalin said.