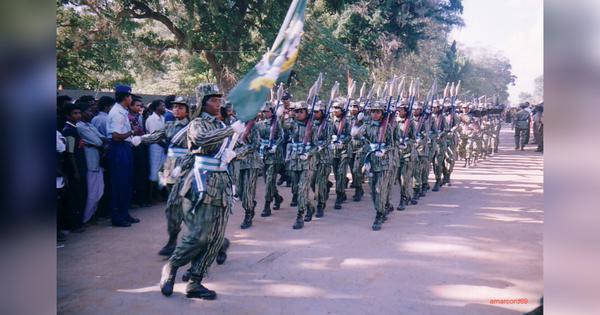 Tamil nationalism grew stronger within the Tamil diaspora every day even as its flames died down with the end of the prolonged war in Sri Lanka in 2009. The end was not a quiet one, and it was not a war with a clear beginning or end, writes academician Sharika Thiranagama.

What happens when you grow up surrounded by conversations of this war in Tamil Nadu and your whole life becomes an act of documenting it, unravelling the entangled threads and ensuring that suppressed voices find a way to be seen and heard? This book, first intended as a documentary, emerges as a witness to the Sri Lankan conflict.

What is it like to read a documentary film? That’s the second question that emerges. The documentary format as a form falters as it fails to capture everything that the director, Meena Kandasamy, intended. And so, she writes this book. The Orders Were To Rape You.

Meena Kandasamy grew up with posters of the women fighting for Tamil Eelam, the “Tamil homeland”, in Sri Lanka. The author describes having “borrowed courage” from them. In this book, there is a long essay on her life, on the lives of Tamil women she shoots for her documentary, and the Sri Lankan civil war, followed by translations of their fierce poetry. Through this method, what emerges is not the mythical Tamil Tigress who adorned the walls of Kandasamy’s childhood home, but Tamil woman who fought for freedom and a life of dignity.

From the beginning, it is clear that Kandasamy only engages with one aspect of Tamil nationalism. There is engagement with the war, the LTTE, the women in the LTTE, and their unstable status as Tamil refugees of war and victims of violence, but there’s no room here to discuss the larger socio-political aspects of the Tamil nationalism, different perspectives on this nationalism within the Tamil diaspora, and the LTTE’s own complicated history of violence in the North and East of Sri Lanka.

Women in post-traumatic situations who are also victims of sexual assault are doubly victimised. Kandasamy writes that these Tamil women, escaping war and sexual violence, are doubly victimised too, and are at constant risk of exploitation because of their circumstances. Amidst all this, they put their trust in Kandasamy and her camera and open up to her.

She documents their everyday life – folding laundry while talking as a means to record them while hiding their identity. We get insights into this process every now and then in the book, which is, effectively, a documentary brought to life in words. Everything that Kandasamy intended to capture in the documentary and more is laid bare in the form of the written word. Here, she is both a participant in and a witness to the Sri Lankan conflict and the lives of the women who fought in the conflict and escaped it.

In a way, Kandasamy too participated in the conflict – as a young journalist, she documented everyday atrocities and translated news reports and conversations, after which she followed the aftermath of this war through the lives of these Tamil women. So, even as she looks for witnesses, she emerges as one herself.

The book emerges not just from the documentary footage, but also from audio files. The author focuses on the layers between what was documented on video, what remains on audio, and what is translated to another language. The distance created by these layers allow her to reflect on the subject matter. Having no access to the original video files, Kandasamy started weaving stories of two women in the war – one, the wife of a Tamil Tiger, and the other, a female Tiger in her own words.

Kandasamy’s internal monologue, her process of creating the documentary, of not letting herself collapse during the process, of somehow finding ways to connect to her subject – all these complications turn this long essay into a self-reflective portrait of a filmmaker and writer dealing with a tough subject. A couple of formal questions came up as I read the accounts of her interactions with her subjects: What kind of distance is a filmmaker allowed while making a documentary? What happens when such crucial testimony of victims of war is lost to hard drives and rediscovered years later?

From observer to participant

All these years later, the Sri Lankan civil war still appears to haunt the island and its residents. What the Tamil population has from the war are remembrance and memorialisation. This is precisely what is attacked – the choice of remembrance when the digital trace of an Instagram hashtag, #tamileelam. is removed by the app, and when a war memorial at Jaffna University, commemorating the victims of the last phase of the war, is razed to the ground.

At this point, when the filmmaker rediscovers her old testimonies, jogs her memory to recall her childhood in a Tamil household tracking the war and its outcome every single day, translates poetry by the Tamil Tigresses and acquires a space quite unlike any other – that of a victim of sexual abuse and someone documenting the victims of the same, a third space emerges.

In this third space, the writer, director and the witness – all the same person – is no longer an observer but a participant who has the final control over her narrative. A dignity that was denied because of abuse and violence is reclaimed. And the intention behind this attempt in the writer’s own words is a simple one, a “hope of being better understood”.

A similar thread emerges in the poetry of these Tamil women that Kandasamy translates. The poems are feminist and fiercely political. Captain Vaanathi, an LTTE leader and poet writes in her poem “Get Ready for Battle”:

You, who have become
a refugee in your kitchen,
because of the storm of patriarchy
You, waging a silent war with fire!
Get ready, and come!

Akeela Makshood writes, “The women Vanaathi described were those who had abandoned social norms, namely married life, to pursue the fight for the nation above everything else.” In the conservative Tamil society that placed many restrictions on women, the Tamil women joining the LTTE had several barriers to overcome.

Maureen Turim, a Holocaust and Trauma studies scholar, constitutes historical trauma as a historical artefact. The victims of trauma who allowed Kandasamy to document their lives, and Kandasamy, who herself processed her personal traumas through writing and the poetry that emerges from these translations, are not just historical artefacts of the Sri Lankan civil war – this book concretely becomes an important historical artefact of the many traumas inflicted upon women who fought and escaped the Sri Lankan civil war as they battled the loss of home, family, identity and a sense of being in the world, and of the internal war that is waged every day just by merely carrying on with one’s existence as a woman. The book is a meaningful attempt to communicate the collective experience of trauma and enrich it with posterity, significance and dignity.

The Orders Were to Rape You: Tigresses in the Tamil Eelam Struggle, Meena Kandasamy, Navayana.