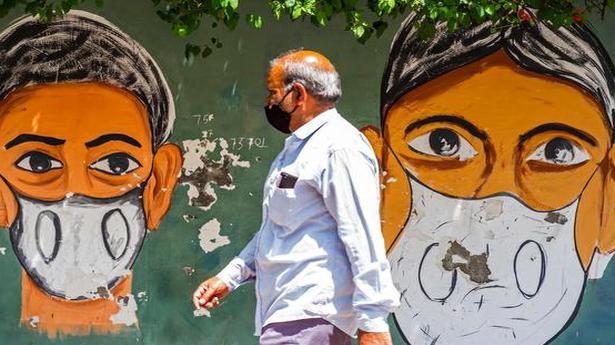 India recorded the highest single-day rise in coronavirus cases in six months with 89,129 new infections in a span of 24 hours, taking the COVID-19 tally of cases to over 1.23 crore, according to State Health Departments and Ministries on Saturday.

India on Saturday recorded 89,129 new COVID-19 cases in a day, the highest daily rise in around six-and-half-months, taking the nationwide tally of infections to over 1.23 crore, according to the Union Health Ministry data on Saturday.

The jump in cases reported on Saturday was the highest since September 20 last year when 92,605 new infections were recorded in a span of 24 hours.

Corresponding to the rapid surge in cases, the number of active cases too have registered a steady increase for the 24th day in a row with the tally reaching 6,58,909, which is 5.32 per cent of the total infections. The recovery rate has further dropped to 93.36 per cent, the data stated.

The active caseload was the lowest at 1,35,926 on February 12 and comprised 1.25 per cent of the total infections.

The number of people who have recuperated from the disease surged to 1,15,69,241, while the case fatality rate has dropped to 1.32 per cent, the health ministry data stated.

Argentine President Alberto Fernandez has tested positive for the new coronavirus, is waiting for the result to be confirmed and is in good spirits despite having a light fever, the first-term Peronist leader tweeted on Saturday.

“I am in good physical condition,” the president, who turned 62 on Friday, said in a tweet. He had received Russia’s Sputnik V vaccine against the coronavirus early this year.

‘Serious concern’ over COVID-19 in 11 States/UTs

The current COVID-19 case growth rate of 6.8% in March 2021 has surpassed the previous record of 5.5% (June 2020), noted a release issued by the Central government following a meeting chaired by the Cabinet Secretary Rajiv Gauba on Friday.

The government has also identified 11 States/UTs as areas of grave concern — Maharashtra, Punjab, Karnataka, Kerala, Chhattisgarh, Chandigarh, Gujarat, Madhya Pradesh, Tamil Nadu, Delhi and Haryana. These States/UTs have been reporting a surge in daily cases and daily mortality because of COVID-19 in the last two weeks. The meeting was to review and discuss the COVID-19 management and response strategy.

“Another worrisome aspect pointed out at the meeting was that Tier 2 and Tier 3 cities along with peri-urban areas have recorded a surge in COVID-19 cases. The spread of infection to the rural areas with weak health infrastructure would overwhelm the local administration,”’ noted the release.

Eight groundstaff members at the Wankhede Stadium have tested COVID-19 positive during the tests conducted ahead of the Indian Premier League’s (IPL’s) 2021 edition. The Wankhede is scheduled to host 10 league games from April 10 to 25.

The Hindu understands all the 19 groundstaff members at the Wankhede Stadium underwent RT-PCR tests over the last week. While three were confirmed to have contracted the virus during the tests conducted on March 26, five more test reports conducted on April 1 returned positive on Friday.

Strict restrictions in Maharashtra in the coming days: Uddhav

Maharashtra Chief Minister Uddhav Thackeray on Friday said that strict restrictions would be implemented in the State in the coming days, adding he did not want to impose a lockdown on the people but would be left with no option if COVID-19 cases continued to rise in the present manner.

“I have been getting calls enquiring whether a lockdown would be imposed in the State. I am only warning today; I am not announcing anything. I will be watching for the next two to three days and discussing with various stakeholders. I will announce strict restrictions in the coming few days. We have to stop this wave and ensure there is no third wave. It is not a one-way process; both sides have to work hard. I expect cooperation like last year,” said Mr. Thackeray, in his address to the State.

(With inputs from our Correspondent, agencies)