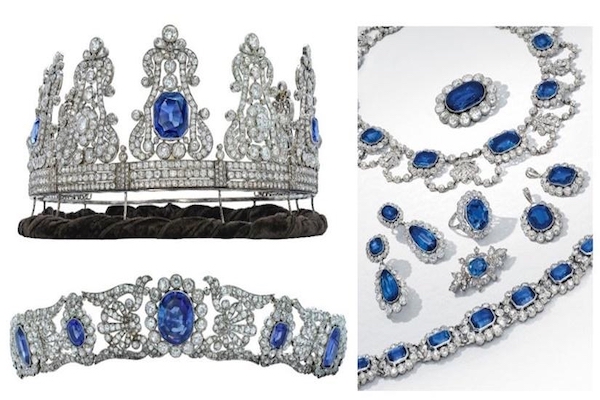 New Delhi: A nine-piece jewellery parure from the collection of historical French leader Emperor Napoleon I’s adopted daughter, Stephanie de Beauharnais (1789-1860) will go under the hammer at a Christie’s jewels auction in Geneva on May 12. May also marks 200 years since the death of Napoleon (1769-1821).

The nine pieces, including a tiara, one collier, one pair of earrings, two pendants and brooches as well as a ring and a bracelet will be offered as individual lots. A total of 38 sapphires originating from Ceylon were used to create this parure in the early 1800s.

The collection also includes the sapphire crown of Maria II Queen of Portugal, set with a remarkable Burmese sapphire in the centre, says the auction house. Napoleon I married Josephine de Beauharnais in 1796, who was Stephanie’s aunt. A month before her own wedding, Stephanie was adopted by Napoleon.

A record in writing, found between the boxes of jewels, stated that these sapphire jewels were given to Stephanie by her cousin Hortense de Beauharnais. Such an origin is very likely. In many paintings, Hortense, and her mother Empress Josephine, can be seen wearing precious belts.

After Stephanie’s death in 1860, the sapphire parure described as ‘necklace, pendant, earrings, 7 pins and a belt’ was inherited by Stephanie’s second daughter, who died in 1900. In her will, she left the sapphires to her eldest son.