Ahead of Good Friday, we trace Chennai’s history with hot cross buns 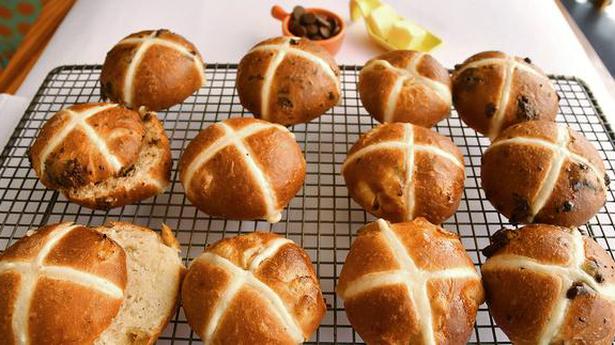 Hero of the famed nursery rhyme, part of Passion week lore… In Chennai, the hot cross bun is flavoured by Anglo-Indian, Vietnamese and English recipes

“The van used to draw up just around 11 in the morning, when the Stations of the Cross gave over,” reminisces Jean Joseph, who lived in the Anglo-Indian stronghold of Foxen Street, Perambur, for decades.

“Squidgy, soft buns were offloaded in trays, wrapped in butter paper and distributed to everyone in church. I remember it being warm in my hands as we carried it home to break the Good Friday fast,” she adds, wistfully.

Foxen Street holds out as one of the last bastions of the fast vanishing world of Anglo-India, and for years has risen and slept under the warm blanket of comfort that the aroma of baking exuded from stellar bakeries such as Ajantha and Coronation.

Ajantha Bakers, established in 1972 at the cusp of Paper Mills Road and Foxen Street, is known for its wedding cakes, pound cakes and marzipan-rich, soft and chewy Easter eggs, all made from old Anglo-Indian recipes. But it is in the week between Palm Sunday and Easter Sunday that it comes into its own. Its hot cross buns — eggless, slightly spiced, peppered with raisins and tinged in nostalgia — were sold in the thousands, and were ordered in bulk by churches before the COVID-19 pandemic.

“This year, too, we are ready with the buns,” says Ashok, manager, adding that the bakery on the first floor overlooking quaint tiled houses, continues to churn out Easter goodies.

The words ‘bun’ and ‘Easter’ are derived from the Anglo-Saxon lexicon, meaning ‘sacred ox’ and ‘Eostre’, the goddess of spring. According to pagan legend, oxen were sacrificed and their horns emblazoned on freshly baked bread. The four quadrants made by the cross on the bread are said to have represented the phases of the moon. The modern version of the hot cross bun is a British invention that came with Europe opening up to trade with the East. Spices and salt started to cost less and the sweet-savoury bun with a pasty white cross on its golden brown top became a Good Friday baker’s treat. The cross came to symbolise Christ’s Passion and death, and the spices, the mixture with which his body was embalmed with before he was laid in his tomb.

So popular and wholesome were the buns that they were baked through the year, and Queen Elizabeth I had to issue a royal decree to stop their year-round baking so that their religious symbolism would not be lost. Nevertheless, in Britain where it first originated, hot cross buns have been celebrated in a nursery rhyme and sold in supermarkets through the year with top honours and listicles drawn up for the best buns.

A pinch of faith

Toasted, buttered, dunked in tea or eaten straight from the pack, the buns also have their share of lore. The bar at the Bell Inn, Essex, UK, has buns from every Good Friday since 1906 suspended as buntings. The belief is that hot cross buns were hung in kitchens to prevent fires and the spirit behind them would never let them go mouldy. They were also said to prevent shipwrecks. They have also been mixed with unusual flavours such as Earl Grey tea, rum-soaked sultanas and potato-bread dough.

In Chennai, Ravi Varma, pastry chef at Taj Coromandel’s La Patisserie, has lent the classic bun a flavourful twist — sticky toffee hot cross buns with nuts, cinnamon sugar, crossed with salted caramel, and red velvet buns with cocoa and beet stuffed with mascarpone cream. Priced at ₹150 they are on sale till Saturday.

“We also have the traditional buns with candied fruit, flavoured with home-ground spices and crossed with slurry. Before baking, we place the bun on a mixture of sugar and butter to give it a caramelised bottom,” says Varma, adding the buns are baked only for Good Friday, while designer eggs shaped as telephones and antique clocks are also on sale for Easter — all sold in sanitised packaging.

Iconic Buhari Hotel on Anna Salai follows the traditional recipe for the buns. The hotel that has stood here since 1951 has had an in-house bakery since the 1960s. Above the roar of traffic and people sipping tea and tucking into samosas, Carlton Mark, general manager, says, “Our egg-free recipe for hot cross buns was handed down by Vietnamese bakers who worked in our bakery. The buns are priced at ₹50 and will be stocked until Saturday.”

Back home, an early Good Friday arrives via Dunzo. Pumpkin Tales’ mix of the classic hot cross bun and another made with dough marbled with chocolate, comes wrapped in butter paper for old times’ sake. There is also a loaf of sourdough speckled with walnuts and cranberries. “We sold hundreds of hot cross buns last year in the midst of a lockdown Good Friday. It was comfort food for many,” says Chindi Vardarajulu, creative chef and partner. “Our buns have butter in the dough and orange zest. We bake a week ahead.”

The bun is soft and subtly spiced; the raisins are plump and a citrusy aroma fills the air when it is broken; the cross sits on the golden-brown dome — all merging in a holy grail of flavours.

Then fold in all the dried fruits and peels. Rest the dough for 15 minutes or store in the refrigerator for a day. Divide the dough into 60 grams portions and shape them round. Place the buns on a greased baking tray and allow them to prove for one hour to 90 minutes in a relatively humid and warm place until they double in size.

Whisk the cross ingredients together, make a thick paste that will pipe easily. Spoon paste into a piping bag. Pipe the cross on the buns.

Pre-heat the oven to 180 degree Celsius, bake for 20-25 minutes or until golden brown on top, rotating the pan halfway through. If you notice the tops browning too quickly, loosely tent the pan with aluminium foil. Remove from the oven.

Glaze with honey or apricot jam.