Tamil Nadu Assembly Elections | We will not be intimidated by Stalin’s malicious propaganda: CM 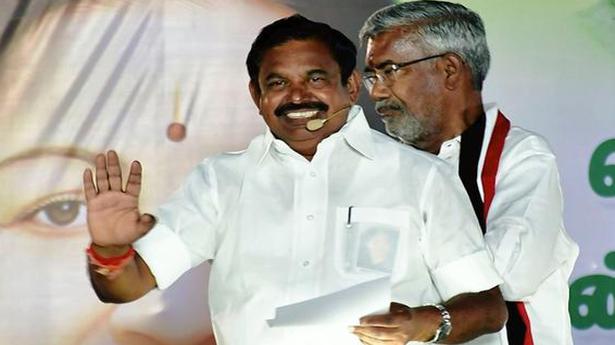 Accusing DMK president M.K.Stalin of levelling unfounded charges against the AIADMK government and Ministers, its leader and Chief Minister Edappadi K. Palaniswami on Tuesday asserted that he and his colleagues would not be intimidated by such propaganda.

Campaigning in support of the AIADMK candidates at Marakkadai in Tiruchi, Mr. Palaniswami felt that Mr. Stalin had been levelling unfounded allegations against the Ministers as he could not stomach the growing popularity and goodwill gained by the present government. It was to defame the government and to confuse the voters that the DMK president had been levelling unsubstantiated allegations. “We will not be intimidated by the malicious propaganda. We have done nothing wrong and are prepared for anything,” Mr. Palaniswami said.

The DMK had no locus standi to talk about corruption. Several senior leaders of the party were facing serious corruption cases. Most of the former DMK Ministers had been running educational institutions using the swindled public money, he claimed.

Mr. Palaniswami alleged that Mr. Stalin had evolved a secret plan to sideline seniors and former Ministers in his party to effect a succession plan to crown his son Udhayanidhi.

According to him, 13 former DMK Ministers had been facing corruption cases for misusing the power and swindling public money. They would not only go to jail but also their political careers would be over if they were found guilty of the offence. All of them were seniors and were capable of questioning the DMK leadership. It was only to silence them that Mr. Stalin had been advocating setting up of special courts, he contended.

Mr. Palaniswami reiterated his allegation that the DMK and its alliance parties had managed to win the Parliament elections by deceiving the voters with attractive promises and unleashing malicious propaganda. But 38 MPs belonging to the DMK and the Congress had failed to raise the people’s issues in Parliament, he claimed. They had done nothing to get funds for the State. But most of the MPs were super rich and they had been mainly trying to protect their wealth, Mr. Palaniswami claimed.

“Mr. Stalin is again trying to hoodwink the people by launching a malicious campaign. The voters will not be deceived again. They will give a fitting lesson to the power-mongering DMK and its leader,” he said.