Dr Bill Lumsden has his cake and drinks it too 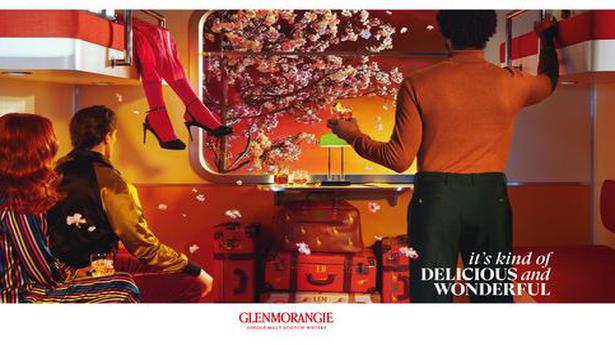 From creating a Glenmorangie single malt inspired by grandma’s cake to another designed for mixologists, whisky’s Willy Wonka is ready for a changing world

There’s little doubt that the global pandemic of 2020 changed the ways of the world. For brands, especially in the luxury space, it was time to pivot or perish. This included the tradition-bound Scotch whisky industry, and taking this challenge head on is The Glenmorangie Company, the Scottish jewel in the LVMH crown with two high-profile malt Scotch whisky distilleries, Glenmorangie at Tain in Ross-shire, and Ardbeg on the Isle of Islay. Glenmorangie, the 175-year-old whisky brand, named the best-selling single malt in Scotland virtually every year for decades, is now acknowledging that single malt whisky is no longer the domain of tweed-clad older men nursing a wee dram by the fireside.

That message comes across loud and clear in their latest marketing campaign for Glenmorangie Original. Yes, the vibrant Glenmorangie orange still saturates the minute-long video clip by celebrity photographer Miles Aldridge. But it features psychedelic scenes of fishbowls with orange fish. And whisky-sipping by bubble baths, in train compartments, on ferris wheels, on neon-bright balconies and on kaleidoscopic camping trips. The vibe is youthful, each scene an eyebrow-raising statement. Far from the monotone concepts of smoky men’s clubs and misty peat bogs are the modern ideas of inclusivity, boundary breaking and ‘anything goes, it’s a brave new world’.

“Single malt whisky is becoming democratised. While whisky is still exclusive and expensive, the way people drink it is different,” Dr Bill Lumsden, known to most as Dr Bill, tells me over Zoom. With the company for over 25 years, Glenmorangie’s director of distilling and whisky creation has always been open to change. “My own experimental lab, called the Lighthouse, will be opened later this year. Here I can try all sorts of things with distillation that I can’t do in the busy main distillery… it features two full-size Glenmorangie stills but with all sorts of bells and whistles fitted on!” he laughs showing me the image on his phone.

When Dr Bill joined the industry in 1984 it was frowned upon to even put ice in your whisky: it was an intimidating drink. Things have changed dramatically. No longer is the production of premium malt whisky the monopoly of Scotland. Australia, Finland, Israel, India, even Wales and England are among many others that have joined early movers like Ireland, Japan and the US. Where does that leave Scotland?

The more the merrier, says Dr Bill. “As a proud Scotsman and scientist I believe what differentiates Scotch whisky from others is the climate in Scotland. It’s perfect for whisky’s long slow maturation, while the cool, damp conditions help develop oxidative ageing, giving it fragrance and complexity.” Pausing, he adds, “The one other single malt whisky which most closely mirrors single malt Scotch is Japanese whisky. Though I think Scotch has greater complexity.”

I ask if he ever wonders what his newest consumer, the mercurial new age youngster, thinks of Scotch whisky in a world filled with casual easy-pleasing drinks like hard seltzers, canned wines and low alcohol brews? Dr Bill is already one step ahead and new products are a-coming. To cater to the mixology boom, he has developed the brand new X by Glenmorangie, along with a clutch of 30 recommended X-based cocktails trialled and good to go. There is more.

Another new limited edition whisky released last year, Glenmorangie’s A Tale of Cake, was created from his own childhood memories of his granny’s cake-making and aged in casks which once held iconic Tokaji sweet wine. The luscious whisky boasts of “bursts of honey, white chocolate, fruit and mint” designed to be paired with cake, of course. Candied colours on the bottle and case are eye-catching. “But if I had suggested this when I joined, I’d have been fired,” says Dr Bill.

That said, he believes that there is no one type of consumer any more. The company will always keep the faith with their traditional consumer, the older, knowledgeable drinker, buyer of 90% of their products.