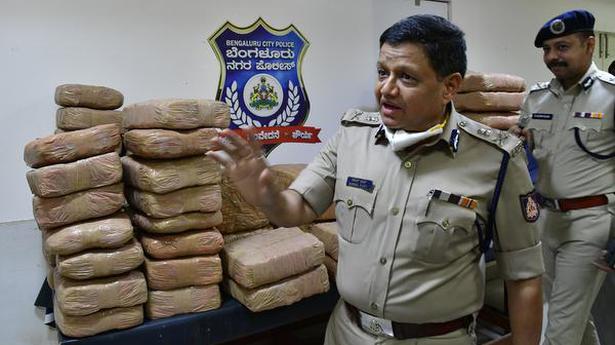 The Whitefield division police on Friday unearthed an inter-State drug racket and arrested three people from Rajasthan. They recovered 500 kg of marijuana worth ₹1 crore from the truck they were driving.

The accused, Dayalram, 38, Poonaram, 24, and Budharam, 23, were intercepted by a police team near Medahalli in K.R. Puram when they arrived to deliver a consignment to a client.

Acting on a tip-off, the police, under the guise of customers, approached the accused. They later searched the 10-wheeled truck and found a hidden compartment in the drivers’ cabin. “Concealed in the compartment were 82 bundles of marijuana,” said a police officer.

The accused allegedly confessed to have sourced the drugs from their contacts in Odisha and planned to sell it in Bengaluru. “We have seized the truck and taken the trio into custody,” the officer said.