88 Per Cent Of All COVID-19 Deaths In India In Age Group Of 45 Years And Above: Government | News 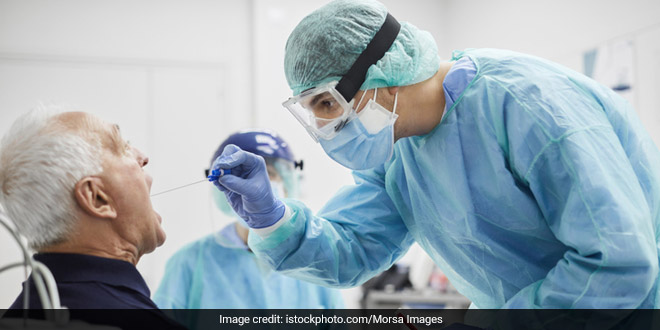 New Delhi: People aged 45 and above account for about 88 per cent of all COVID-19 deaths in India making them the most vulnerable section, the Union Health Ministry said on Wednesday (March 24), a day after the government opened up vaccinations for all those in the age bracket from April 1. Addressing a press conference, Union Health Secretary Rajesh Bhushan said the case fatality rate in the age group is 2.85 per cent as against an overall national average of 1.37 per cent. “About 88 per cent of all COVID-19 deaths in the country are taking place in the age group of 45 years and above, making them the most vulnerable group that needs to be protected,” he said, adding that this is the reason behind allowing their vaccination from April 1.

Speaking about the new SARS-CoV-2 variants, National Centre for Disease Control Director S K Singh said 771 variants of concern (VOCs) have been detected in 18 states and union territories, which include 736 samples that were positive for viruses of the UK (B.1.1.7) lineage.

Till now, no linkage has been established to show that the surge being witnessed in some states is directly because of only virus mutants. There are various reasons behind a surge. States having a larger pool of susceptible population are prone to witness rise in cases. Whenever the susceptible population will lower their guard and not follow COVID-19-appropriate behaviour, they will get the infection, be it the normal virus or the mutants, he said.

There are only three variants of concern, detected in the UK, South Africa and Brazil. In addition to these, some other variants of interest have also been found in some states, including Maharashtra and Delhi, which need to be further analysed and investigated, he added. Mr. Bhushan said there are roughly three per cent active cases of COVID-19 and these active cases are concentrated mainly in 10 districts — nine in Maharashtra and one in Karnataka. These districts are Pune, Nagpur, Mumbai, Thane, Nashik, Aurangabad, Nanded, Jalgaon, Akola, and Bengaluru Urban.

Two states are of grave concern which showed recent surge in cases. First is Maharashtra which reported over 28,000 cases. The top five districts are Pune, Nagpur, Mumbai, Thane and Nashik, he said.

Mr. Bhushan said Punjab is another state of grave concern because, considering its population, a very high number of cases are being reported there. Jalandhar, SAS Nagar, Ludhiana, Patiala and Hoshiarpur in Punjab are reporting high number of cases, he said.

We had a meeting with health officials of Maharashtra and Punjab to talk about refinement in their strategy to tackle the surge, he said.

Mr. Bhushan said there are a few other states too which are a matter of serious concern. These are Gujarat, Madhya Pradesh, Karnatak, Tamil Nadu, Chhattisgarh and Chandigarh which have recorded a surge in COVID-19 cases. In Gujarat, about 1,700 cases are being reported everyday, while about 1,500 cases are being reported in Madhya Pradesh daily. Surat, Ahmedabad, Vadodara, Rajkot and Bhavnagar in Gujarat are recording high number of cases, while Bhopal, Indore, Jabalpur, Ujjain and Betul in Madhya Pradesh are witnessing a surge in infections.

Karnataka and Tamil Nadu have also recorded recent surges. Karnataka is reporting about 2,000 cases per day, while Tamil Nadu is recording about 1,400 new daily cases. On vaccination, Bhushan said 5,08,41,286 coronavirus vaccine doses were administered till 10 am Wednesday, which include 2,64,52,366 doses given to those aged above 60 and those aged 45-60 years with comorbidities. He said 20 states and union territories, including Kerala, Madhya Pradesh, Chhattisgath, Rajasthan and Bihar, have administered the first dose of COVID-19 vaccine to more than 92 per cent of healthcare workers, and 14 states and UTs have given the second dose to more than 85 per cent of eligible healthcare workers.

These states have been asked to follow suit of other states that have high vaccination coverage, he said.

Mr. Bhushan said Telangana, Manipur, Nagaland, Mizoram and Chandigarh have low vaccination coverage of frontline workers. The government had announced on Tuesday that from April 1, all people above 45 years of age will be eligible to get COVID-19 vaccines. The countrywide vaccination drive was rolled out on January 16 with healthcare workers getting inoculated and vaccination of the frontline workers started from February 2.

The next phase of COVID-19 vaccination commenced on March 1 for those who are over 60 years of age and for people aged 45 and above with specified co-morbid conditions. On the recommendation to give the second dose of Covishield after a gap of 4-8 weeks from the first dose, Mr. Bhushan said the protection against the virus is enhanced if the second dose is administered between six and eight weeks, but not later than the stipulated period of eight weeks. He further said the revised time gap between two doses is applicable only to Covishield, and not to Covaxin.