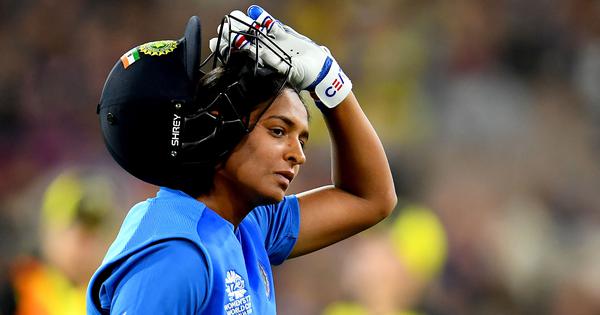 India’s T20 International skipper Harmanpreet Kaur has been ruled out of the opening series-opener against South Africa in Lucknow due to an injury, vice-captain Smriti Mandhana said on Friday.

Harmanpreet suffered a hip-flexor injury while batting in the fifth ODI against the Proteas on Wednesday. She retired hurt in the middle of her innings and did not return to bat or field later.

The series opener will be held on Saturday, followed by the second match on Sunday. The third match is scheduled for 23 March.

“She (Harmanpreet) is out of [first] match and rest of the update on her condition will be given by the medical team and the team management,” Mandhana said during the virtual pre-match press conference. “It will be better for them to speak about it rather than me.”

Speaking at the end of the ODI series defeat head coach WV Raman had said, “From what I gather, she (Harman) has sustained a hip strain grade one and that will be monitored and all the necessary procedures are being followed. Her progress will be monitored. I don’t think it is a serious injury, we might see her take the field in the T20 series, as things stand now.”

India were outplayed by South Africa in the ODI series with the visitors pocketing the rubber 1-4.

But Mandhana said the ODI series is a thing of the past as their focus shifts to the T20 rubber.

“We will try to forget the ODIs and focus on the T20 series. Yes, the ODI series was a disappointment but we need to forget that and move ahead. Some new faces have come in the team, so we need to think fresh,” Mandhana said.

India were sloppy in the field during the ODI series and Mandhana stressed on working on that aspect of the game.

“We have been in the process in the last 3-4 years. Few catches were dropped in the ODIs, but we need to get on with a fresh mind in the T20 series and leave behind the ODI series disappointment,” she said.

She also pointed out that the spinners, India’s biggest strength, need to pull up their socks in the T20 series.

“Spinners are our biggest stregnth. Definitely, they (spinners) were not bad but inconsistent in their bowling (in the ODI series). But if we keep pitching the ball in the same same areas, it will become difficult for batters,” Mandhana said.

Mandhana also confirmed that Shafali Verma, who will return for the T20Is, will open with her as was the case in the T20 World Cup last year. The T20 World Cup final on March 8 was the last time India played in this format.