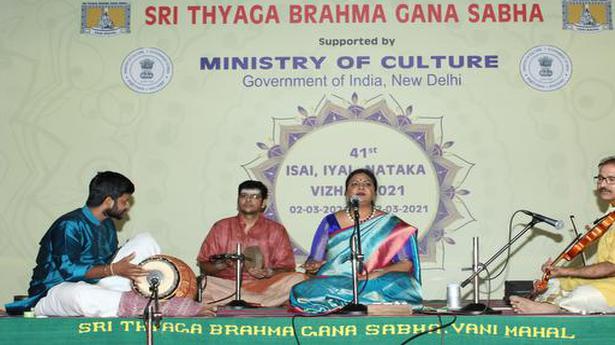 Nithyasree’s rich variety of songs was rendered in quick succession, sustaining the interest of listeners. A delicate and divine instrument, veena always demands a greater understanding of ragas by the player as well as in selecting the kritis and exploring their strong and subtle nuances. Nithyasree’s understanding came through in her clear enunciation of the ragas.

Her concert package included both time-tested and rare ragas and kritis by great composers. The well-known Nattakurinji varnam ‘Chalamela’ set the concert rolling and Tyagaraja’s crisp composition ‘Giriraja sudha’ in Bangaala came up next.

A sprightly Mohanam touching the pleasing contours of the raga led to ‘Evarura ninnuvina,’ again a Tyagaraja composition. A few slender strands of brisk swaras adorned the pallavi.

The popular and breezy ‘Karpaga manohara’ (Papanasam Sivan) in Malayamarutam, ‘Kothanda ramam’ (Muthuswami Dikshitar) in Kokilaravam, for which she played a brief alapana, and a fast-paced ‘Nenarunchi’ (Tyagaraja) in Malavi paved the way for the Ragam-Tanam-Pallavi in Pantuvarali. The raga detailing and the tanam were done with dynamism and prominence on the gamakam as well as melody, carrying a majestic tenor.

Andal’s verse in Khamas and ‘Celi nenetlu’ Javali in Paras by Pattabhiramayya were the tail-enders. B. Sivaraman on the mridangam and N. Guruprasad on the ghatam kept the tempo of the concert in the right order. Their energetic tani avartanam with lively rhythmic exchanges was enjoyable.

‘Inta modi’, Saranga varnam was a perfect start. (Thankfully, her choice was not the usual Bhairavi, Thodi and Sri). Pantula began with ‘Sri Mahaganapati’ the Muthuswami Dikshitar kriti in raga Gowla. Her weaving of swaras in the end, on shadjam as the focal note, added lustre to the rendition.

Her next choice was a Sriranjani essay. A slow and soulfully developed raga image was more emotive than vibrant. Justifying the treatise’s mood, Pantula Rama sang ‘Kaana Vendamo’ a Papanasam Sivan kriti sated with the anguish of devotion. Nevertheless, she added a few swara passages to display the raga’s vivacity.

The highpoints of the concert were the detailed raga exposition of Amritavarshini in all the three registers, and a detailed Vagadeeswari. The sloka ‘Ya devi sarvabhoodeshu’ was followed up with ‘Anandamritavarshini’ (Dikshitar). The swara section had different nadais. And for the Vagadheeswari piece, Pantula’s raga exposition demonstrated her ingenuity in eliciting the beauty of the Mela raga. The fact remains that the raga can slant towards shades of Chalanatta, the next in the scale. But at every stage and in each phrase, Pantula established the Vagadheeswari stamp without ambiguity.

It is true that Pantula eschewed the regular and well-known ghana ragas, but she made an impact with the ragas she chose. It came from her long innings and her relentless efforts to make every concert carry the stamp of her musical wisdom.

M.S.N. Murthy on the violin responded well but kept within the limits of an accompanying artiste. Nonetheless, his versions of Amritavarshini and Vagadheeswari were quite remarkable.

Youngsters N.C. Bharadwaj and Anirudh Athreya played the percussion side on mridangam and kanjira. Their enthusiasm was quite visible in their replies during swaras and also in the concise tani avartanam.