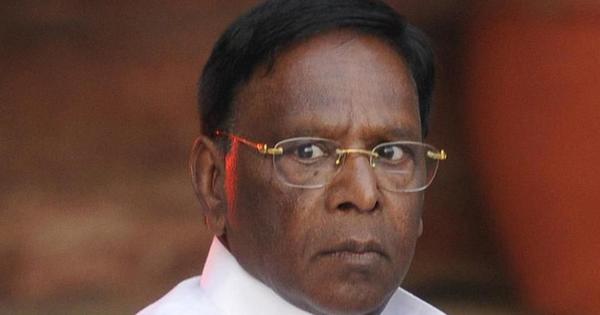 The Congress on Tuesday kept former Puducherry Chief Minister V Narayanasamy out of the list of 14 candidates it announced for the upcoming Assembly elections in the Union Territory, ANI reported. All India Congress Committee in charge of Puducherry Dinesh Gundu Rao told the news agency that Narayanasamy will look after the campaign and election management.

The Congress, which is a major party in the Secular Democratic Alliance, will contest 15 of the 30 seats in Puducherry, while its ally Dravida Munnetra Kazhagam will field candidates from 13 constituencies. Nellithope, the constituency represented by Narayanasamy in the Assembly has been allotted to the DMK, according to India Today. Other allies have been allotted two seats.

However, the list released by Congress on Tuesday mentioned 14 names and the party is yet to announce the candidate for one seat.

Polling for the 30 seats in Puducherry will be held on April 6 and counting of votes will take place on May 2.

Narayanasamy had submitted his resignation as the chief minister on February 22 after his government lost a floor test in the 33-member House, which includes three nominated members.

The Congress government was reduced to a minority, following the resignation of four of its MLAs. Congress legislator A John Kumar resigned on January 16, following Malladi Krishna Rao who quit the day before. Two others, A Namassivayam and E Theeppainjan, had resigned in January. On February 21, two more MLAs – one from the Congress and the other from the Dravida Munnetra Kazhagam – tendered their resignations. K Lakshminarayanan, the Congress MLA, said he quit because he did not get his due recognition in the party.

The Union Territory was placed under the President’s Rule on February 25, following the dissolution of the Assembly.