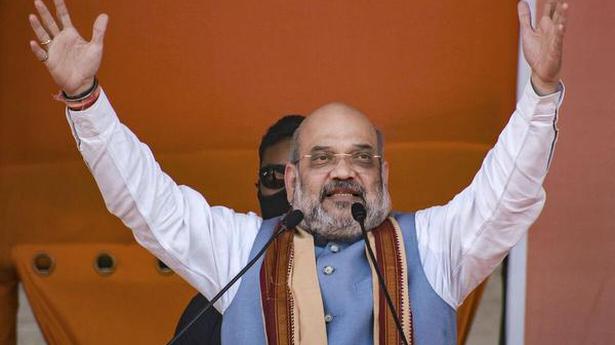 130 workers killed in politics of violence during your regime, says Union Home Minister

Union Home Minister Amit Shah on Monday broke his silence on the injury of West Bengal Chief Minister Mamata Banerjee, wished her speedy recovery but asked why she can’t feel the pain of the families of 130 BJP workers killed in political violence during her regime. Mr. Shah was responding to Ms. Banerjee’s statement on Sunday, “I’m still in pain but I feel the pain of my people even more.”

“Didi you are very upset after the leg injury. But I want to ask you if you feel the pain of the families of 130 BJP workers killed because of the politics of violence,” Mr. Shah said at a public meeting at Ranibandh in Bankura district.

Mr. Shah said while the Trinamool Congress leadership claimed that there is a big conspiracy behind Ms. Banerjee’s injury, the Election Commission said it was an accident. “Only God knows what the truth is,” the Home Minister said. The Trinamool leadership had questioned the silence of senior BJP leaders particularly Mr. Shah and Prime Minister Narendra Modi on the injury. Ms. Banerjee was injured while campaigning in Nandigram on March 10. She was discharged from hospital on March 12 and started campaigning on March 14 on a wheelchair.

Mr. Shah was scheduled to address a rally in the Jhargarm district but could not make it physically to the venue after his helicopter developed glitches. Many Assembly seats located in Purulia, Jhargram and Bankura districts located in south-west Bengal will go to the polls in the first phase on March 27.