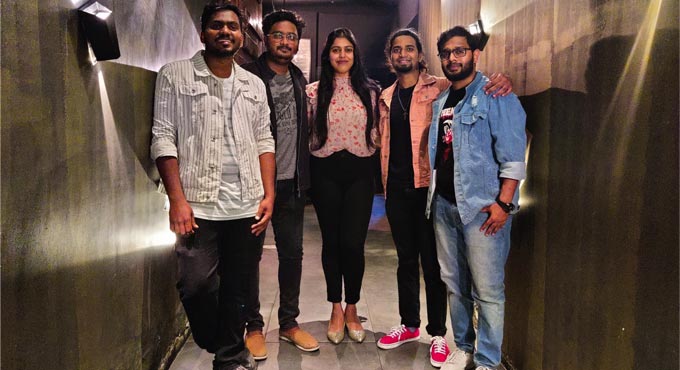 Hyderabad: Visit a high-end pub in the city on the weekends and chances are high that you’ll run into Taarey – The Band, belting out regional and Bollywood hits, with the entire pub grooving in sync with the beats. This band, which is increasingly being seen in pubs now, was started three years ago and the success that they have now is the result of three years of hard work, dedication and struggle by its founder Rohit Nallala and his team.

“I was experimenting with various bands in college as I wanted to start a band of my own and even create music of my own. I used to perform in college and through the journey, I met Simon Induri (our drummer) through my friend Shravan Inavolu (our bassist). Simon and I started jamming together and after we performed for the first time in late-2018, we got the zeal to do more,” shares Rohit, who is the lead guitarist and the vocalist for the band.

Having roped in Shravan later to play the bass, they decided to have another vocalist and a pianist on board. “We made that team and we used to go to various venues in the city and offer free demos. There were times when we performed to zero audience and while it took time for us to get recognised by venues, it surely happened,” shares the self-taught musician, adding, “Later, the other vocalist and the keyboard player left the band and then the lockdown also happened.”

The lockdown hit them hard right when they were on the rise and after the lockdown, Rohit connected with his college-mate and Paadutha Theeyaga 2018 title winner Sree Poornima Adiraju, who joined the band as the female lead singer in October 2020. “I was in the US for a couple of years and when I came back, I wanted to go watch Rohit and team perform but they asked me to be a part of the band. Our first gig was at Air Live and we got a tremendous response and so far, it has been great,” says Poornima.

With Abhyudaya Chowdary Tummalla as their keyboard player and their sound engineer, the band is now known for their high energy performances, setting the stage on fire at least four times a week in the city. They also plan on coming up with their original music soon.