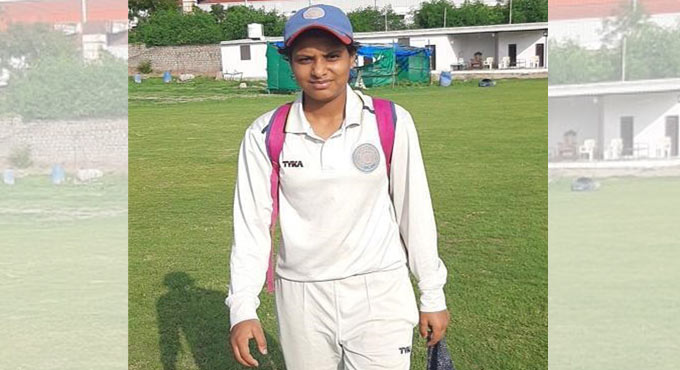 Mamatha, daughter of a dhobi/watchman in Alwal is now in Surat (Gujarat) as the second wicketkeeper to Hyderabad team that is currently playing the in Senior National Women’s cricket championship

Hyderabad: Overcoming all challenges, Mamatha, daughter of a dhobi/watchman in Alwal, pursued her dream to play big-time cricket and made it to the Hyderabad senior cricket team.

“My father Madiwala Veeresh hailed from Gulbarga (Karnataka) and settled in Hyderabad. We stayed in a small room. As a kid, I always wanted to play cricket. I played ‘gully’ cricket with boys. Seeing my batting and interest in the game, my father wanted me to take cricket more seriously. In 2016 he took me to Gymkhana ground in Secunderabad and enrolled me as a junior cricketer,’’ said the 17-year-old Mamatha, who is now in Surat (Gujarat) as the second wicketkeeper to Hyderabad team that is currently playing the in Senior National Women’s cricket championship.

However, the journey wasn’t easy. She needed some financial assistance to play the game. “As my father could not afford to purchase the cricket kit, my mother, Bhagya, began to work as a domestic help in houses to help me purse my dream. Even the neighbours helped me in purchasing a bat and other cricketing kit,’’ said Mamatha, who is a second year intermediate CEC student of Vaibhav College in Alwal.

As Mamatha was short in stature, former international and coach Nooshin Al Khadeer suggested her to become a wicketkeeper. “It came naturally to me. I began to enjoy my role,’’ she said. In 2018, although she got selected for the Hyderabad under-19 team, she became No 1 keeper of the team two years later.

During one of the practice sessions, V Chamundeswarinath spotted Mamatha in the Hyderabad under-19 camp. “I was impressed with her work behind the stumps and ethics. When I came to know that she hailed from a poor background, I decided to support her to play the game,’’ he said.

Mamatha, who idolises Mithali Raj and Smrit Mandhana, began to attend the camp at Rama Naidu Centre in Jubilee Hills where Chamundi gives free coaching and he even arranged an auto for her.

Chamundi took her to former Test stumper and chairman of selectors MSK Prasad, to give Mamatha tips on wicketkeeping. “She is also very good in batting and got 60, 70 not out in the trials matches in the senior selection matches.”

Chosen as second wicketkeeper to Anuradha, Mamatha got the chance to keep wickets against Gujarat in the first match as the former got injured while batting and did not concede a single bye.
Chamundi who presented an electric two-wheeler to her is confident Mamatha will be selected

for the Indian under-19 women’s team for the World Cup. “I even plan to send her to Yorkshire (England) for further training,’’ he said.