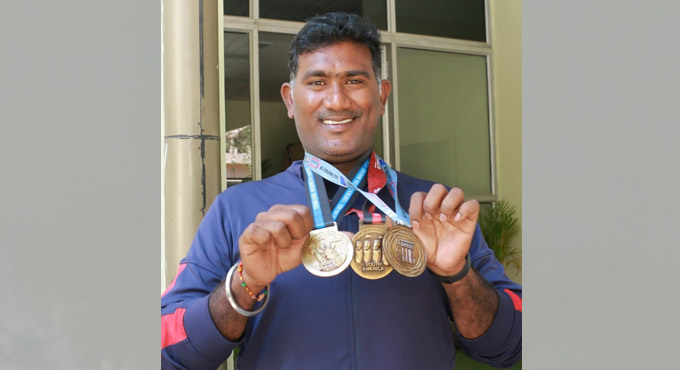 Khammam: An Armed Reserve Police constable, Pilli Raju, attached to the Khammam Police Commissionerate headquarters, has been bringing international fame to the Khammam police by winning international marathon medals. With events like meetings, celebrations and sports meets going virtual during the Covid-19 pandemic, the constable made best use of the opportunity and participated in the recent international marathon events of South America and North America and won medals.

The virtual marathons are the events that allow participants to run anywhere in the world duly following the event guidelines with the help of a mobile application. The participants have to upload the screenshots of their run’s starting point and finishing point on to the app. Based on the time taken to finish the run, the participants will be presented with medals. In a half marathon, the runner has to cross a distance of 21 km within three hours of time to win the medal.

Speaking to Telangana Today, Raju said he had completed the South America half marathon organised on January 31 in two hours and fifteen minutes, while it took him two hours and 10 minutes to complete the North America marathon held on February 14. For these events, the starting point was Sardar Patel Stadium in Khammam town from where he reached Kodumuru in Chintakani mandal and came back to Lakaram tank in Khammam to finish the run. Cairn Pink City Half Marathon is the official Indian agency to manage the events locally.

Running apps like Strava and Adidas Runtastic based on GPS tracking are used to keep the organisers posted about one’s running status. Raju completed the Hyderabad Half Marathon, a physical event held on February 28 in the State capital, in two hours and six minutes bettering his previous performances. He received a medal in the virtual Delhi Marathon-2020 held on November 29 and is yet to receive a medal for his participation in virtual Europe Half Marathon event held on Feb 28. He is looking forward to the London Marathon to be held in December.

Incidentally, 34-year-old Raju, a native of Kostala village in Wyra mandal, secured the constable job in sports quota in 2009. His sports portfolio includes Kabaddi, Judo and Wrestling, and he represents the Police Department in annual national and State events and won over 30 medals.

Commissioner of Police Tafseer Iqubal has appreciated Raju for his achievements and presented a reward. Additional DCP (AR) Kumara Swamy and ACP (AR) Vijay Babu also lauded the constable for bringing laurels to the Police Department.