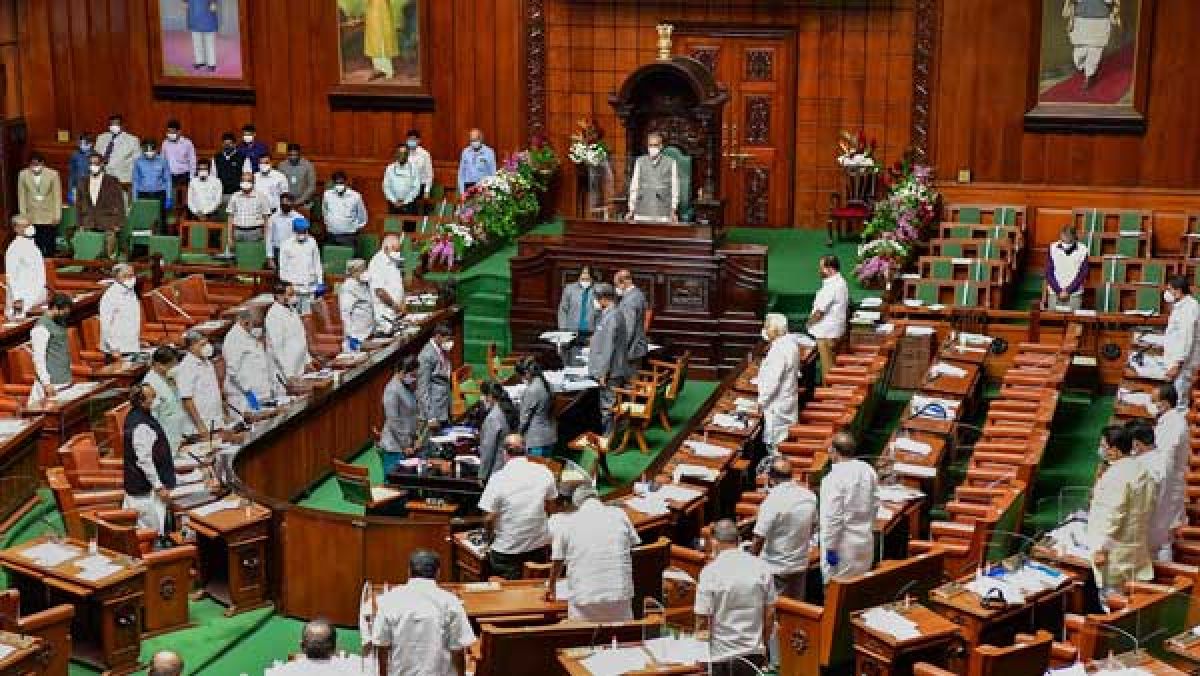 Bengaluru, Mar 09: Karnataka Legislative Assembly Speaker Vishweshwar Hegde Kageri on Tuesday referred the breach of privilege notice against Congress MLA BK Sangamesh for his recent “indecent” conduct in the House, to the privilege committee, despite protest by opposition members.

Sangamesh was on March 4 was suspended from the Assembly till March 12 for removing his shirt inside the House, during a protest by his party members against the special discussion on ‘One Nation, One Election’ (ONOE).

The privilege notice by senior BJP MLA Araga Jnanendra with the support of requisite members present in the House was allowed for discussion. But as there was no order in the assembly with protest and sloganeering by Congress members, the discussion could not be held and the Speaker referred it to the committee on privileges.

Referring the matter to privilege committee, Speaker Kageri hit out at Congress members pointing out that they were not interested in discussion on ONOE or regarding privilege notice now, also they don’t attend Business Advisory Committee meeting and boycott budget, which was not right for democracy.

“We have to uphold parliamentary values and fulfill the aspirations of people… keep your irresponsible politics outside the House,” he said. During his preliminary submission regarding his notice on breach of privilege, Jnanendra said, the conduct of Sangamesh on March 4 during Congress’ protest, was disrespectful to the Chair, which has utmost sanctity, and amounts to breach of privilege of the House.

As he referred to the incident about Sangamesh removing his shirt in the assembly, Congress members objected to it and said he did that out of anger about false cases booked against him and his family members. To this some BJP members retorted by demanding that he should be suspended permanently.

Intervening, Leader of Opposition Siddaramaiah said Sangamesh has been suspended from the House for his conduct, then what was need for it to be taken up again.

“He (Sangamesh) is not in the House to defend himself.. so it should not be allowed,” he said.

Replying, Speaker informed Siddaramaiah that Jnanendra was speaking on breach of privilege notice and according to rules it can be taken up even if the person against whom it is moved is not present in the House, and asked him can raise objection if any, once the submission is made.

Sticking to his stand that such discussion should not be allowed when the concerned member is not in the House, Siddaramaiah questioned as to why such action taken during similar incidents in the past.

Accusing the Congress of trying to suppress the voice of the members of the House with such repeated protests and calling it ‘undemocratic’, Jnanendra pointed out that even after suspension Sangamesh disregarding the orders tried to enter the House and spoke ill about Speaker and the Chair in front of the media.

The conduct of Sangamesh amounts to breach of privilege of the House, the BJP MLA said and urged that he has to be expelled from the House for indefinite period. Jnanendra then sought to move the motion and for detailed discussion on the matter. Speaker Kageri then sought to know whether at least 10 members in the House were in support of Jnanendra’s notice, following which all the BJP MLAs stood in support.

Subsequently, Speaker announced that he will allow the discussion. Objecting to it, Siddaramaiah said Sangamesh has not disrespected the Speaker and if he has spoken anything outside there was no authentication for it.