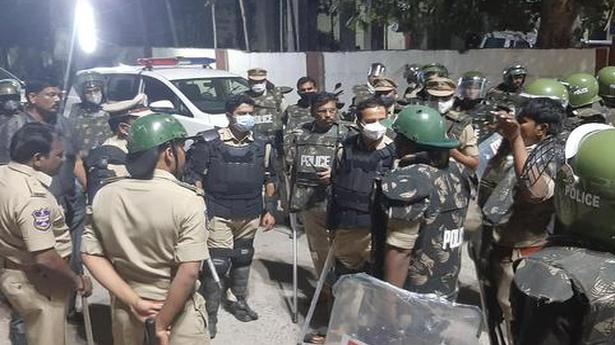 Prohibitory orders were clamped and internet services suspended by the authorities at Bhainsa town in Nirmal district, following communal clashes between two groups on Sunday evening.

Some houses, vehicles, and petty business establishments were damaged in the arson that followed the violence on Sunday. This led the law enforcing authorities to invoke the Temporary Suspension of Telecom Services (Public Emergency or Public Safety Rules 2017) of the Indian Telegraph Act, 1885, to stop locals from sharing videos and photographs of the incidents on online messaging platforms and to contain the issue. The police had resorted to lathicharge for more than half-a-dozen times till Monday afternoon.

More than 10 people, including police personnel and a journalist of a Telugu news channel, suffered severe injuries, in the clashes. The journalist, Vijay, who rushed to the spot to report the incident, was attacked by a few miscreants with a sword. After first-aid in a local hospital, Mr. Vijay was shifted to a corporate hospital in Secunderabad, where his condition is said to be stable.

Speaking to The Hindu, Nirmal District Superintendent of Police (in-charge) Vishnu S. Warrier said that till Monday evening four cases were booked against several persons on charges of rioting, arson, bodily offences, based on various available evidence and as and when complaints are filed they would register more cases.

He said that the clashes started at around 8.45 p.m. after a heated argument between a biker and people from another community, and by 10.30 p.m. the situation was brought under control.

“More than 600 additional police personnel from five neighbouring districts, apart from Nirmal police, are deployed in the town to control the situation,” Mr. Warrier said.

More than 50 persons, including suspects and trouble mongers, were taken into custody, another officer said.

He said that people are using various online messaging platforms to circulate videos and photographs and spreading rumours, which might cause law and order problems not only in communally sensitive areas, but also in other parts of the State and country as well.

Speaking on withdrawal of internet service in the town, he said suspension of the internet is only a temporary solution, “now we have to come out with a permanent solution to control or even curb the spread of hatred between two groups in this tiny town bordering Maharashtra.”

He noted that the damage was already done, as photos and videos of the violence were circulated on WhatsApp and other online messaging platforms much before the internet was curbed in Bhainsa. Last year, two communal clashes — one in January and another in May — took place in the town wherein more than 30 people were injured and several houses and vehicles were set on fire.

“CCTV footage and other technological aids are being utilised to identify and arrest the accused who are involved in the incident,” Inspector General of Police (North Zone) Y. Nagi Reddy said.

He said that six civilians, three police officers suffered injuries in the violence. While two houses, two auto rickshaws, two four wheelers and five two-wheelers were set on fire by the miscreants.

“All offenders involved in the incidents will be brought to book. Strong actions will be initiated against all offenders, including externment and preventive detention,” Mr. Reddy said.