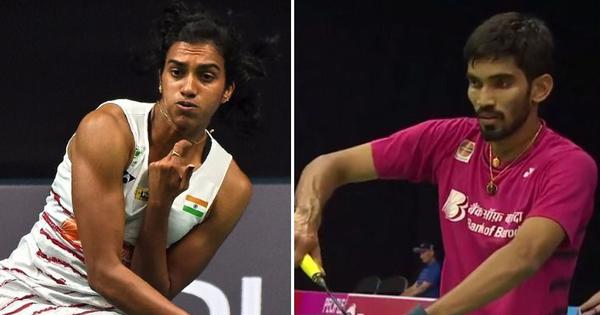 Olympic silver medallist Sindhu advanced to final four with a straight-game win over Thai Busanan Ongbamrungphan and apart from the later stages of the second game, had the proceedings under control.

Sindhu, who won the historic world championship gold medal at the same venue in 2019, took a minute less than an hour to see off a fighting Busanan, seeded fifth, 21-16, 23-21 to set up a clash with fourth seed Denmark’s fourth seed Mia Blichfeldt. The second seed is yet to drop a game at the tournament and has now extended her head-to-head record against Busanan to an incredible 12-1.

Following Sindhu’s match, Srikanth too posted a straight-games win when he ousted sixth seed Kantaphon Wangcharoen. In what was a rematch of the round of 16 match at this venue during the 2019 World Championships, Srikanth showed great composure at crucial junctures to produce arguably one of his best results in recent times.

In a rollercoaster match that witnessed both players win points in clusters, Srikanth saved his best for the last to win eight out of the last nine points in the second game. Srikanth won 21-19, 21-15 in 44 minutes. Srikanth was trailing 9-11 in the opener, then won 7 straight points to go up 16-11, then Wangcharoen bounced back to make it 18-18. Srikanth then had game point at 20-19 which he converts to clinch the opener. In the second game, the Thai shuttler went from 5-7 to 12-8, then Srikanth went from 13-14 to 19-14 before closing it out 21-15.

World no 10 pair of Satwik-Chirag, seeded second, took on fifth seeds Ong Yew Sin and Teo Ee Yi of Malaysia and looked out of sorts in the opening game. But the youngsters showed great maturity to put the first game behind to bounce back in a hard-fought second game. The decider went largely in favour of the Indians after that as the reversed the first game’s scoreline to win 12-21, 21-19, 21-12 in 55 minutes.

Srikanth faces a daunting task next up against the red-hot Dane star Viktor Axelsen, who is also the top seed.

Satwik and Chirag will next face Kim Astrup and Anders Skaarup Rasmussen from Denmark. The Danes are seeded sixth and hold a 2-1 head-to-head record against the Indians.

However, the other Indian shuttlers in fray met with defeats in three quater-finals.

Olympic Games hopeful B Sai Praneeth, who reached the final in the last edition, lost 14-21, 17-21 to Malaysia’s Lee Zii Jia in 45 minutes to bow out of the tournament. Lee is the second seed at the event. The fifth seeded Indian never got a foothold in the game and by the time he started stringing points together, Lee was in control.

Surprise package of the tournament Ajay Jayaram could not overcome another seeded player. A day after stunning third seed Rasmus Gemke, the Indian veteran’s campaign ended after a 9-21, 6-21 loss to eighth seeded Thai Kunlavut Vitidsarn in another last eight men’s singles match.