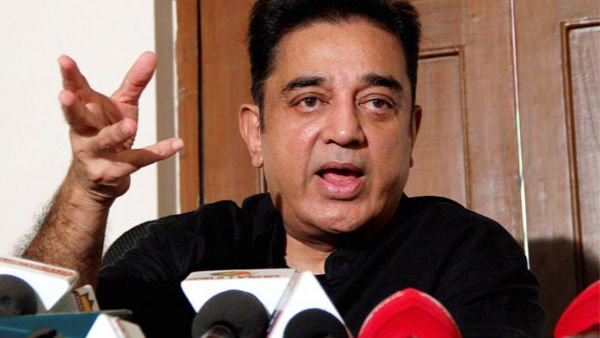 Chennai March 03: Veteran actor and Makkal Needhi Maiam (MNM) founder Kamal Haasan on Wednesday said he is in talks with “like-minded” parties for a possible electoral alliance for the April 6 assembly election.

Reiterating that he is keen on forging ties with “good people”, Haasan said several parties have initiated discussions for a possible alliance with the MNM and he “shook hands” with the All India Samathuva Makkal Katchi (AISMK).

“Many parties are holding discussions and some like the AISMK shook hands. We will decide on alliance first before a confab on seat-sharing,” Haasan told reporters here when his attention was drawn to AISMK founder R Sarath Kumar’s assertion that an alliance between the two parties has been firmed up.

Addressing his party’s general council meeting in the southern coastal district of Thoothukudi earlier in the day, Sarath Kumar claimed his party has firmed up an electoral alliance with the MNM and that Haasan will be its chief ministerial candidate.

“After hectic talks, poll ties was confirmed five minutes before midnight yesterday. In principle, we have decided to journey together. Kamal Haasan will be the chief minister candidate for the emerging alliance,” Kumar said.

Meanwhile, Haasan announced that former President A P J Abdul Kalam’s scientific advisor V Ponraj, who has joined the MNM, will be the vice president of the party.

Announcing his party’s poll assurances, Haasan said MNM is committed to ensuring the dignity and recognition of homemakers.

There will be 50 percent reservation for women in the uniform sector. Hostels will be made available in every district for free emergency overnight stay for women in distress, he said.

Establishing banks that will be run by women and for women, too, figured in the party’s agenda which also promised jobs to 50 lakh youth and monetisation of households.

Haasan on Wednesday evening launched his electoral campaign and trained guns at the BJP and AIADMK, saying the saffron party thinks that Tamils could be convinced to vote for by “tweaking” Tamil pride while the AIADMK government”s promise of jobs to youth has remained far from reality.

“Tamils are not for sale, their votes are also not for sale,” he said and urged the people to give a mandate to his party to establish a corruption-free government.