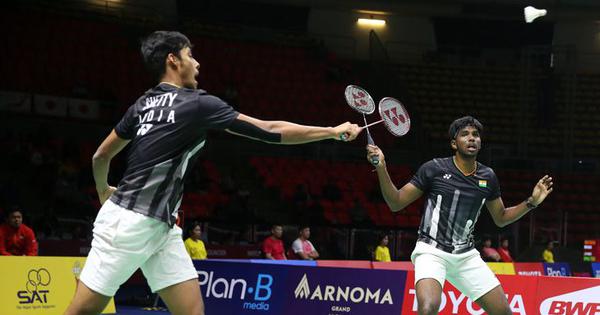 Former world No 1 Srikanth Kidambi staved off a spirited challenge from compatriot Sameer Verma to make a winning start to his campaign at the Swiss Open Super 300 tournament in Basel on Wednesday while second seeds in men’s doubles Satwiksairaj Rankireddy and Chirag Shetty were made to work hard by lower-ranked opponents.

Later in the night, returning to the venue of her memorable World Championship triumph, PV Sindhu was made to work harder than she might have expected by world No 29 Neslihan Yigit. It was not an easy outing but the second seed did enough to beat Yigit 21-16, 21-19 in 42 mins.

After a rather clean start to the match, Sindhu could not quite control the errors on her racquet and kept her Turkish opponent within touching distance through the match. But the world No 7 did fewer mistakes when it mattered than Yigit to prevail in straight games. Sindhu will be up against Iris Wang next.

Update: In the late matches on Wednesday, Saina Nehwal suffered another first round exit as she lost a tough match against Phittayaporn Chaiwan (world No 31) in three games 21-16 17-21 23-21. The Indian former world No 1 had two match points to complete a come-from-behind win but her Thai opponent held her nerve to save those and convert her first. Later on, P Kashyap also lost his first-round match against Spain’s Pablo Abian. In the final match on court two, B Sai Praneeth got off to a winning start by clinching a straight-games win against Misha Zilberman and he will face Abian in the next round.

Satwik-Chirag, ranked No 10 in the world, were pushed all the way by the Scottish duo of Christopher Grimley and Matthew Grimley (ranked No 62), but were able to assert their superiority in time to win their first round match 21-18 19-21 21-16 in 69 minutes.

The first two games were close affairs as the Indians were not allowed to dictate tempo by the Grimleys while errors did not help. In the decider, a more assured performance from one of the tournament favourites proved to be enough. The Indians will now face unseeded Pramudya Kusumawardana and Yeremia Rambitan (ranked 54) in the 2nd round.

Earlier in the day, Srikanth — seeded fourth at the event — took a little over an hour to see off 2018 winner Sameer 18-21 21-18 21-11 in a hard-fought men’s singles opening round match. Srikanth, who had claimed the title in Basel in 2015, will now take on France’s Thomas Rouxel and will be eyeing a deep run to keep his Olympics hopes alive.

In the other notable result of the day, Ajay Jayaram pulled off an impressive win in his opening round match against world No 29 Sitthikom Thammasin. Playing his first match off the calendar year, Jayaram clinched the match in straight games 21-12 21-13 in just 35 minutes. Ajay faces a tough test next up in the form of third seed Rasmus Gemke from Denmark.

In women’s doubles, Ashwini Ponnappa and Sikki Reddy make a winning start to their campaign in women’s doubles. They beat Germany’s Annabella Jaeger and Stine Kuspert 21-5, 21-19 in just 33 mins.

There was disappointment later on in the evening for Lakshya Sen who would have hoped for a better run in Basel in his bid to earn Race to Tokyo points. He went down 16-21, 12-21 against world No 65 Viktor Svendsen from Denmark. This was Sen’s first even since the coronavirus-forced break last year.

Former world No 8 Prannoy lost a close first game, fought back to force the third game by winning the second 21-9, and saved a match point at the end but went down against Mark Caljouw 19-21, 21-19, 17-21. Prannoy, also a former winner of the event, lost the match in 62 minutes against the Dutch shuttler ranked No 36 in the world.

In the other men’s doubles match involving Indians, MR Arjun and Dhruv Kapila lost against seventh seeds Vladimir Ivanov and Ivan Soznonov from Russia 16-21, 18-21 in 38 minutes.

On Wednesday night, Indian mixed doubles pair of Satwiksairaj and Ashwini Ponnappa notched up an upset 21-18 21-10 win over the world No 8 and second-seeded Indonesian pair of Hafiz Faizal and Gloria Emanuelle Widjaja in the opening round.

Satwik and Ashwini, who reached the semi-finals of the Toyota Thailand Open Super 1000 event in January, had earlier defeated the Indonesian combination at the Yonex Thailand Open in a thrilling three-game match in January.

The world no. 19 duo, who has been training under new foreign coach Mathias Boe for the last one month, will face another Indonesian pair – Rinov Rivaldy and Pitha Haningtyas Mentari – next.

Another Indian shuttler, Pranaav Jerry Chopra, who was returning to action after a Covid-19 pandemic break, didn’t have a good outing as he along with his mixed doubles partner N Sikki Reddy lost 18-21 15-21 to the third-seeded English pair of Marcus Ellis and Lauren Smith in 39 minutes.

Swiss Open is the first event of the extended Olympic qualification period which will end on June 15.

(You can follow the results and schedule of Indian contingent in Basel here.)