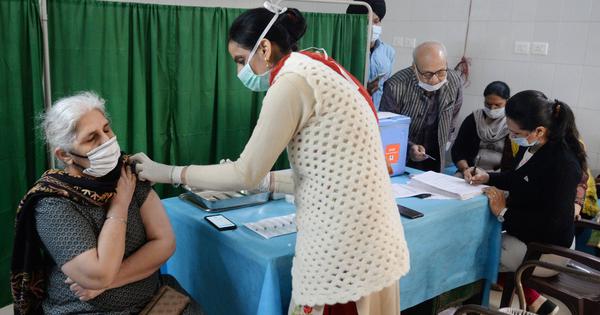 The Union health ministry on Tuesday said that people can take the first and second dose of the coronavirus vaccine at different locations as well as change the dates of their inoculation schedule.

“When you schedule a reservation and take your first jab, the second jab is also scheduled automatically at the same place, where you took your first jab,” RS Sharma, the chairperson of Empowered Group on Covid-19 vaccination said at a press briefing. “…Now, in case you think you are not able to go to that place because of various reasons… you may change that also.”

He pointed out that the system will show only those locations that are administering the same vaccine given as the first dose. Sharma also said that 50 lakh people have so far registered for getting inoculated in the second phase of the vaccination process, which covers people of the age of 60 and those above 45 with comorbidities.

Health Secretary Rajesh Bhushan said that 90% of healthcare workers have so far been administered the first dose of the vaccine. Tamil Nadu, Karnataka, Gujarat, Odisha and Ladakh lead the list in inoculating the healthcare workers.

He also said that 75% of eligible healthcare workers have been given the second jab of the vaccine so far. Nine states and Union Territories, including Lakshadweep, Nagaland, Andaman & Nicobar Islands and Sikkim, have administered the dose to more than 85% of the beneficiaries concerned.

Further, nine states, including Gujarat, Madhya Pradesh, Rajasthan and Lakshadweep, have vaccinated more than 70% of the total frontline workers.

Bhushan said that there has been a marginal increase in the number of daily cases in the past few days. He pointed out that only two states – Kerala and Maharashtra – have more than 40,000 active cases. They are jointly contributing 75% to India’s active caseload.

He said that India’s active case rate was 1.51% and the recovery rate stood at 97% of the total caseload.

The daily coronavirus cases in Tamil Nadu has been plateaued and a central team has been deputed there, reported The News Minute. The state on Tuesday reported 474 cases.

Meanwhile, Defence Minister Rajnath Singh received the first dose of the coronavirus vaccine. “India’s resolve for making the country Covid free has been strengthened by this inoculation drive,” he tweeted. “The vaccine is completely safe and hassle free.”