‘The Girl on the Train’ review: An alcoholic is accused of a murder she can’t remember 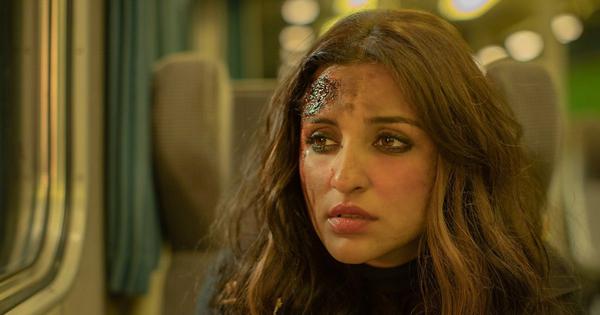 Paula Hawkins’s bestseller The Girl on the Train yielded an unsuccessful Hollywood adaptation in 2016. The tale of a missing woman that has three unreliable narrators, red herrings and a central theme whose unravelling provides the solution to the mystery, the novel poses immense adaptation challenges.

The American production struggled to extract a filmable plot out of an eventful but deeply interior narrative. Ribhu Dasgupta’s Hindi remake, which is out on Netflix, takes the easy way out: it completely sidesteps the source material’s principal ideas.

Rather than a psychological drama about a woman who is lost and finds herself again through sheer willpower, Dasgupta’s The Girl on the Train stumbles about thriller territory. Parineeti Chopra plays Mira, a divorcee in London. Her law practice has been wrecked by her drinking habit. She is still stuck on her ex-husband Shekhar (Avinash Tiwary. Deeply resentful of his second marriage, Mira drinks furiously and sadly.

The couple she sees from her train window on her daily commute gives her a point of focus. Nusrat (Aditi Rao Hydari) and Anand (Shamaun Ahmed) seem to be the picture of contentment. Mira’s voyeurism allows her to build a fantasy narrative around Nusrat.

When Nusrat goes missing and Mira is spotted in the vicinity, the alcoholic who has memory losses and can barely hold herself together but never forgets to put on eyeshade and colour-coordinated clothing is a major suspect. Kirti Kulhari’s police officer gathers a pile of evidence against Mira, forcing the alcoholic to question her movements.

Miscast as the self-destructive and pathetic Mira who must gather her wits to save herself, Parineeta Chopra exemplifies the movie’s lack of direction. Having jettisoned the main premise of Hawkins’s intelligent and sensitive page-turner, the Hindi version comes up with a ludicrous replacement theory for Nusrat’s disappearance. It involves non-linear episodes, flat-voiced ruminations by Mira, and the crisscrossing of several redundant characters.

The London setting serves no purpose except to underscore the British tendency for understatement. In one of the movie’s more risible moments, a drunk and hysterical Mira expresses a violent fantasy about killing one of the key characters. Her friend blandly says, don’t do anything stupid, you will regret it.

The palpable disinterest in characterisation and motive washes over nearly everybody in the 120-minute film, from Parineeti Chopra’s unconvincing shambolic heroine to Kirti Kulhari’s purposeful policewoman.

Perhaps the only character who retains a modicum of feeling is Aditi Rao Hydari’s Nusrat, whose ethereal beauty hides a horrible secret. In this train wreck of an adaptation, Nusrat briefly reminds of what is supposed to be at stake.

Parineeti Chopra on playing a troubled alcoholic in her new film: ‘Was craving something different’

Film review: ‘The Girl on the Train’ struggles to stay on track