In Kashmir, a temple reopens old schism within Pandit community – and shines light on BJP’s politics 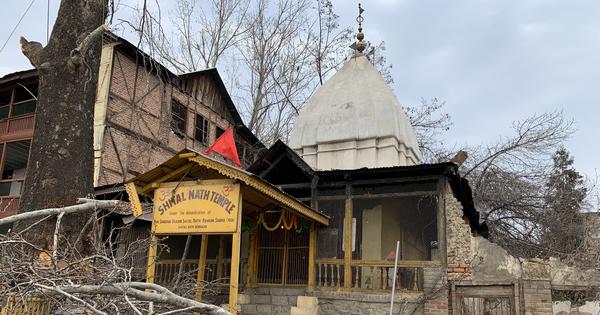 On February 16, a temple in Srinagar became the subject of national news in India. Several media outlets reported that the Sheetal Nath temple in Kralkhud locality had reopened after a period of 31 years, with special prayers held on the occasion of Basant Panchami. The reports claimed the temple dedicated to Shiva had remained shut since 1989 when an armed militancy against Indian rule had erupted in Jammu and Kashmir.

The early years of the militancy saw a massive exodus of Kashmiri Pandits from the valley to Jammu after militants targeted and killed prominent members of the community. Most estimates suggest 76,000 Pandit families left the Kashmir valley in the 1990s.

As a result, the reports about a temple reopening in Srinagar after more than three decades sparked substantial commentary on social media. A leader of the Bharatiya Janata Party in Jammu region, who is also a minister of state in the Prime Minister’s Office, Dr Jitendra Singh, drew attention to it.

In Srinagar, the city’s mayor Junaid Azim Mattu visited the temple and offered assistance with its reconstruction.

The Basant Panchami ceremony was organised by Shri Sanathan Dharm Sheetal Nath Ashram Sabha, a government-recognised body which administers the temple. “Around 30-32 Kashmiri Pandits participated in the special prayers,” said UK Handoo, a spokesperson and member of the management committee of the Sabha. A chartered accountant by profession, he lives in Jammu.

Handoo claimed a priest appointed by the Sabha six months ago had been opening the temple every morning and offering prayers. But what was special about the February 16 ceremony, he said, was the presence of Kashmir Pandits from Jammu: “On the eve of Basant Panchami, we thought why not go to Kashmir and hold prayers at the temple.”

Less than two kilometers from the temple, Sanjay Tickoo laughed off Handoo’s claims. “It’s all lies,” he said. “This temple was reopened by us in 2010 and we held a havan at the temple in July 2011.”

Tickoo, in his fifties, heads Kashmiri Pandit Sangharsh Samiti, a group that advocates on behalf of Kashmiri Pandits who stayed back in the valley during the 1990s. He lives in an old family home in Srinagar’s Barbar Shah locality, and until the Covid-19 pandemic struck, worked in an electronics company.

“If you Google about the temple, you will find its reopening was covered by the media at that time as well,” Tickoo said. A Press Trust of India report from 2010 credited the reopening to the temple – incidentally, on Basant Panchami that year – to the Kashmiri Pandit Sangharsh Samiti.

Nisar Ahmad Bhat, who lives in the neighborhood where the temple is located, has clear memories of the 2010 ceremony. Bhat’s father, Ali Mohammad Bhat, had voluntarily looked after the temple for more than two decades after Kashmiri Pandit families left the area until he died in 2014.

But Handoo, the spokesperson of the Shri Sanathan Dharm Sheetal Nath Ashram Sabha, dismissed the 2010 ceremony as illegitimate. “The people who held that event in 2010 at the temple are not recognised by the government or any court or administration.” The Sabha had been administering the temple for 150 years, he said. “Legally, the reopening or restoration can be done only by us.”

Tickoo, in turn, contested the legitimacy of the Sabha’s current members. “Can they explain who has elected them for this body?” he asked. “Where were these people when there were at least four attempts to burn this temple? They are themselves living in Jammu and they think the temple will be thronged by devotees.”

‘Where are Kashmiri Pandits?’

Tickoo’s activism is widely recognised in Jammu and Kashmir. It was his petition before the High Court in 2007 that compelled the government to take steps for the protection and restoration of temple properties to the Kashmiri Pandit community.

“The Sheetal Nath temple has been under police protection since last 15-16 years,” he said. “I pressed upon the government to keep security there. I still have that government order with me.”

The Sheetal Nath temple was one of the 35 temples that his organisation, with active support of local Kashmiri Muslims, reopened across the Valley between 2010 and 2015, Tickoo said. But the project failed.

“It is not only about reopening the temple but sustaining it,” he explained.

Before the exodus of the 1990s, each temple in Kashmir had an assigned priest and a management committee made up of local Kashmiri Pandits to look after its properties and administration. That is no longer possible, because of the community’s dwindling numbers, Tickoo said.

“Tell me where are Kashmiri Pandits who will take care of all these temples once they are reopened?” asked Tickoo. “Even if some migrant Kashmiri Pandits claim to have reopened the temple, they won’t be able to keep it open for long because they will eventually go to Jammu.”

Split within the community

Successive state governments have announced plans for the resettlement of Kashmiri Pandits, but failed to make them a reality. Since August 2019, when Jammu and Kashmir was stripped of its special status and split into two union territories, the Bharatiya Janata Party-ruled Centre has been directly administering the Valley. One and a half years of its direct rule has not translated into any change on the ground as far as the return of Kashmiri Pandits is concerned.

The BJP government’s inability to effect actual change, however, does not stop it from projecting success – the news about a temple reopening after 31 years is part of this propaganda, many say.

In fact, the contestation over the temple reopening reflects a deeper schism within the Kashmiri Pandit community, split between migrants and non-migrants, BJP supporters and others.

Several migrant Kashmiri Pandits have used Jammu and New Delhi as a base to voice their demands before different governments. Both within and outside India, the discourse about the exodus of Kashmiri Pandits from the valley has been shaped by those who left.

Many Kashmiri Pandits who stayed back feel this discourse has not addressed their concerns. In recent years, they say it has been hijacked by the Bharatiya Janata Party.

In August 2019, when Jammu and Kashmir lost its special status, the split in the community was more than apparent: many migrant Kashmiri Pandit organisations celebrated the Modi government’s move, while those within the valley echoed the sentiment of the region’s Muslim-majority, saying it would deepen the communal divide.

Shishant Chaku, 22, lives in Srinagar’s Habba Kadal area with his parents. A graduate in computer applications, he has no interest in politics. Instead, the young Kashmiri Pandit is preoccupied with the bleakness of his future prospects.

“I don’t see any job opportunity for myself,” he said.

The Chaku family is among those who did not leave Kashmir in the turbulent 90s.

In April 2008, when Shishant Chaku was just nine years old, the Manmohan Singh government announced a Rs 1,600-crore relief package for the resettlement and rehabilitation of Kashmiri Pandits in the valley. Apart from allocating funds for the construction of 6,000 new homes – every family was to receive Rs 7.5 lakh – the package promised government jobs for 6,000 youth.

Kashmiri Pandit organisations within the Valley demanded a share in the package. Tickoo’s organisation went to the High Court in 2013, which ruled in its favour three years later. In 2017, the organisation asked for 500 jobs to be reserved for non-migrant Kashmiri Pandits.

But twelve years later, those jobs are yet to materialise.

The Jammu and Kashmir administration claims of the 6,000-jobs promised as part of the 2008 package, 3,841 had been filled. But not a single vacancy has opened for the local Kashmiri Pandit community.

In September, the Jammu and Kashmir government led by Lieutenant Governor Manoj Sinha had announced around 2,000 vacancies for Kashmiri Pandits under the prime minister’s package.

But Shishant Chaku and other Kashmiri Pandits staged protests to draw attention to the fact that many in the community had grown overage while waiting for the jobs. They asked for the age criteria to be relaxed to accommodate them, when the jobs opened.

The situation is bad, if not worse, for many Kashmiri Pandit migrants.

In Jammu’s Jagti migrant camp, where at least 20,000 migrant Kashmiri Pandits live, the residents have been protesting for the past 146 days. Under the central government’s assistance to the migrants, each migrant family is given a monthly assistance of Rs 13,000. “This amount is not enough. We are demanding that this amount should be raised to Rs 25,000 per month as the cost of living has gone up,” said Shadi Lal Pandita, who heads Jagti Tenement Committee, an elected body of the migrant camp.

In the aftermath of the dissolution of Jammu and Kashmir as a state with a special status, the Jagti migrant camp was one of the spots which had erupted into jubilation over the centre’s decision.

One and a half years later, many at the camp are having second thoughts. Their anger is directed at the ruling Bharatiya Janata Party. “The exodus of Kashmiri Pandits was a mobilising tool for the BJP,” said Pandita. “When we left our homes, BJP and RSS did propaganda and said they will resettle us. They raised funds from across the world and as a result became strong enough to rise to power at the Centre.”

But after coming to power, Pandita said, the BJP backtracked: “All the promises they made to us remain unfulfilled and if we try to raise these issues with them, they ignore us.”

“They exploited some of our community members,” Pandita continued, “who ran a campaign across the world that BJP is everything and they will settle Kashmiri Pandits in Kashmir. But nothing of that sort has happened.”

The perception that all Kashmiri Pandits are closer to the Bharatiya Janata Party is misleading and false, said Tickoo. “Everyone thinks the BJP is our party,” he said. “It is true BJP has used our suffering and pain to get votes. But the reality is that whatever Kashmiri Pandits have got so far or are getting is because of the UPA-II government. BJP has done zero for us.”

Tickoo even went to the extent of claiming that the Kashmiri Pandit groups outside the valley have been attempting to convert the Sheetal Nath temple into the regional headquarters of Rashtriya Swayamsevak Sangh, the ideological parent of the BJP. “When Jammu and Kashmir was a state, there were attempts like that,” he said. “We complained before the Prime Minister’s Office as well as the Chief Minister.”

Handoo denied knowledge of any such attempt. “Why should it become a headquarter [of the RSS]? People can imagine a lot of things,” he said.

He said the temple reopening was an important confidence building measure towards the resettlement of Kashmiri Pandit migrants. “Due to the publicity, many tourists are arriving at the temple to pray,” he said. “Many Kashmiri Pandit brothers living outside might also come and offer prayers here.”

When Scroll.in visited the temple on February 22, a tourist family came to the temple to take a look. They couldn’t offer prayers as the door leading inside the temple was locked.