Detente at the roof of the world The Indian Army circulated the first videos from the world’s highest all-arms military standoff on February 11. A squadron of dun-coloured Chinese Type 99 main battle tanks (MBTs) driving down the rolling hills of the Kailash Range in eastern Ladakh. This was matched by Indian T-72 tanks wheeling away from the location. Five days later, a torrent of images from the Indian Army showed PLA (People’s Liberation Army) earthmoving machines clawing at stone bunkers and fortifications and trudging back to their side of the Line of Actual Control (LAC). The images were proof that India and China had begun disengaging their troops from eastern Ladakh, as defence minister Rajnath Singh had informed Parliament on February 11. They showed just how dangerously close the two sides had come at the border, rival tanks just a few hundred metres away from each other in the first superhigh-altitude armoured face-off since the invention of the battle tank a century ago. The images also revealed the depth and complexity of the PLA’s largest border incursion in decades, tents, fortifications, bunkers and armoured vehicles, and debunked initial Indian government assessment last year that the incidents were nothing to worry about.

The standoff began in April 2020 when the PLA converted its annual summer military exercise into a mobilisation along the 840-km LAC in eastern Ladakh. Nearly 30,000 soldiers were back-stopped by tanks, artillery and infantry combat vehicles at contentious boundary points. The Indian Army rushed in two additional infantry divisions (around 30,000 soldiers) into Ladakh even as it sensed it could not forcibly evict the intruders without the risk of a battle. And so began the standoff.

Nearly 10 months later, the reasons for this huge deployment are still unclear. A senior ministry of defence (MoD) official believes it was for coercion, “to bully us”. In a December 18, 2020 interview to INDIA TODAY, chief of defence staff General Bipin Rawat said that military moves “of this nature and magnitude could not have been done without the topmost Chinese leadership being aware of it”. 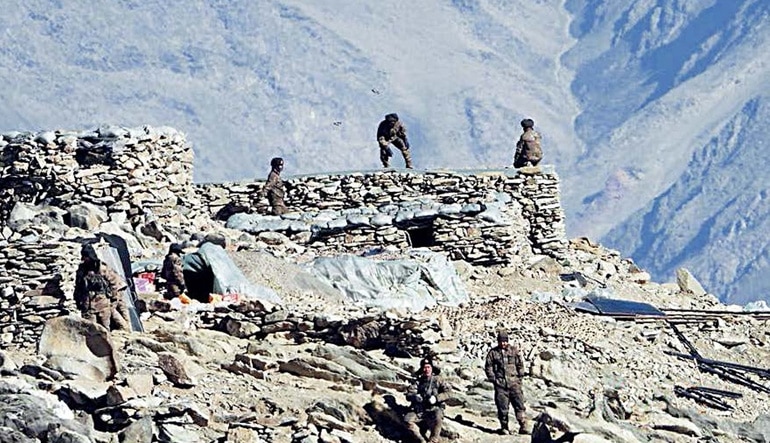 The standoff had teetered on the edge when on June 15, 20 Indian soldiers and an unspecified number of Chinese soldiers were killed in a deadly clash in the Galwan Valley. As the engagement extended through a brutal winter, with temperatures down to minus 20 degrees C, both sides held their ground. Army chief General M.M. Naravane, on January 12, signalled the army’s resolve to stay put for “as long as it takes”. Eventually, the two sides signed an agreement on February 10, announced first by a Chinese defence ministry spokesperson in Beijing.

The Indian Army’s hard-nosed negotiations during the military-level talks seem to have paid off. The breakthrough came after the ninth round of talks between corps commanders on January 24. Indian analysts see the July 2021 centenary celebrations of the Chinese Communist Party as a key reason for China agreeing to the pullback.

A three-stage process of disengagement and de-escalation has now been set into motion. After the verification process, it will hopefully culminate in demilitarisation when the additional troops pull out of the region. The process could take several weeks. But as India and China start taking the first steps towards pulling back from the brink, several questions remain.

1. Did India lose territory in Ladakh?

“Hamne kuchh nahin khoya (We lost no territory),” defence minister Singh told Parliament on February 11. The focus of the PLA incursions and the ongoing disengagement is around Pangong Tso, the 134-km-long boomerang-shaped lake, 40 per cent of which lies on the Indian side and the rest on the Chinese side. Eight hill formations, called ‘Fingers’, protrude into the northern bank of the lake. The Indian Army controls the northern bank up to Finger 3 and patrols the area up to Finger 8, its LAC claim line. The PLA claims the area upto Finger 2.

The first clashes broke out on May 5 last year when the PLA prevented Indian patrols from proceeding beyond Finger 4. Subsequently, the PLA rapidly built camps, bunkers and fortifications in the eight-km distance between Fingers 4 and 8. On August 30, Indian Army special forces launched a countermove to occupy the Kailash Range, hills located south of the Pangong Tso. The range is on India’s side of the LAC and has not been occupied by the Indian Army after the 1962 war with China.

What the February 10 agreement has done is to swap the temporary gains made by both sides (even though the Kailash Range is within India’s perception of the LAC). India and China agreed to halt forward deployments, create a temporary no-go zone between Fingers 3 and 8, remove all newly-created structures and temporarily stop military activity, including patrolling to the traditional areas.

Former defence minister A.K. Antony termed the disengagements in Galwan and Pangong Tso a “surrender”. “We are surrendering our rights,” he said on February 14, accusing the government of ceding areas traditionally controlled by India. In the government’s view, though, the simultaneous pullback is a win. New Delhi had called for restoration of ‘status quo ante’, the ground situation as it existed on April 2020. This has been achieved. An MoD statement on February 11 reemphasised that India had not conceded any territory. ‘On the contrary, it has enforced observance and respect for the LAC and prevented any unilateral change in the status quo,’ the statement said. 2. Did India lose its tactical advantage on the Kailash Range?

On August 30, a brigade (nearly 3,000) of Indian Army special forces occupied the Kailash Range. The army said it had ‘thwarted Chinese intentions to alter the ground situation by occupying strategic heights within the LAC in the Chushul sub-sector’. The army called it a ‘quid pro quo’ move, a riposte aimed at getting the other side to withdraw by capturing or occupying territory. The army gambled that its move would either escalate the standoff or resolve it.

The move placed a bargaining chip in the hands of army commanders negotiating with the Chinese. No one knew the significance of the heights more than the PLA. The area south of the Pangong Tso is relatively flat and amenable to rapid movement of troops. It is just 100 km southeast of Ladakh’s capital Leh. During the 1962 war, the PLA used the Chushul corridor to push into Ladakh. By occupying the Kailash Range and its hill features like Magar and Gurung, the Indian Army could dominate the Chinese military garrison in Moldo. In response, an angry PLA moved its troops and tanks forward to confront Indian soldiers.

By agreeing to pull back from the Kailash Range and by ensuring a temporary no-go zone, the Indian Army says it has restored the status quo ante as it existed on May 2020. The Kailash Range goes back to what it was since the 1962 war, a hill range with a network of defences, ‘sangars’ (stone bunkers) and trenches, meant to be swiftly occupied in case of an offensive from the Chinese side.

3. How long will the disengagement take and how will it be verified?

A key aspect of the disengagement is that both sides have to verify their pullback. The process is underway and senior Indian and Chinese commanders are to meet on February 22 to review it. Both sides have agreed to a ‘temporary moratorium on military activities in the North Bank’. Patrolling will resume only after an agreement in subsequent diplomatic and military talks.

A senior defence official says the February 10 agreement, unlike the one in June last year, calls for both sides to use satellites and drones to verify the pullback rather than rely only on ground troops. “There is more impetus on verification and some flexibility has been included for flying ‘birds’ to verify it,” the official said. This is meant to avoid incidents like the June 15 clash in the Galwan Valley, which occurred when Indian troops went to verify whether the PLA had indeed withdrawn from a post it had occupied.

4. What happens to the other conflict spots, Depsang and Gogra Post?

The Chinese had intruded at four spots along the LAC last April. After military-level talks in June, they withdrew from the Galwan Valley, but held fast to the northern bank of the Pangong Tso, Hot Springs and the Gogra Post, north of the Galwan Valley. An MoD statement on February 11 named Hot Springs, Gogra and Depsang as ‘outstanding issues to be taken up within 48 hours of completion of the Pangong Tso disengagement’.

The 800 sq. km arid Depsang Plains, 270 km northeast of Leh, abut the strategic Darbuk-Shyok-DBO road linking Leh with the Indian Army’s northern-most military base of Daulat Beg Oldie, located at 16,700 feet near the Karakoram Pass. Army officials say the PLA has held Depsang for over four decades. The current PLA deployment is a holdover from a standoff between the two sides in 2013, which seemed to have been resolved after an Indian ‘quid pro quo action’ in the Chumar Plains. The Indian Army’s five patrolling points, PP10, PP11, PP11A, PP12 and PP13, can access only 25 per cent of the Depsang Plains. For several years now, the PLA has stopped the Indian Army from accessing these patrol points.

The Indian Army has reciprocally denied PLA patrols access west of an area called ‘Bottleneck’ to their claim lines near the Indian base of Burtse. The army’s worry is that a Chinese thrust from the Depsang Plains could cut off the DSDBO road, imperiling the ‘Sub-Sector North’ region and the DBO airstrip and military base. “Depsang, whenever it is taken up, will require intense negotiations,” says Lt General Rakesh Sharma, former GOC, 14 Corps.

5. Could there be more standoffs?

The very nature of the 3,448-km-long and undemarcated LAC opens up the possibility of future standoffs. The 740-km Line of Control (LoC) with Pakistan was minutely surveyed by generals on both sides in 1972, after which they exchanged maps to clear doubts if any. In comparison, India and China have differing perceptions of the LAC. The two sides signed a peace agreement in 1993 and notified confidence-building measures (CBMs) in 1996 to prevent border disputes from spiralling. But China’s infrastructure build-up in Tibet and its enforcement of border claims through standoffs have opened the possibility of conflict. The Pangong Tso’s northern bank is one of nine areas where both countries have overlapping claims.

Lt General P. Ravi Shankar, former director general, artillery, believes the mechanism of a ‘no transgression zone’ should be established at all other contentious spots. “It will reduce friction by keeping the forces apart,” he says.

Both countries have been discussing the boundary question since 2003. Their special representatives have concluded 22 rounds of talks, the last time in 2019. It is the special representatives who will set in motion the process of demarcating and delineating the border on the map. Given the extremely contentious nature of the task, analysts believe the process is a long way off. The February 10 agreement could be a via media to that process. Lt Gen. Sharma says the agreement could go two ways: “There could be many pitfalls in its execution or it could be the baby step to the eventual demarcation and delineation of the LAC.”