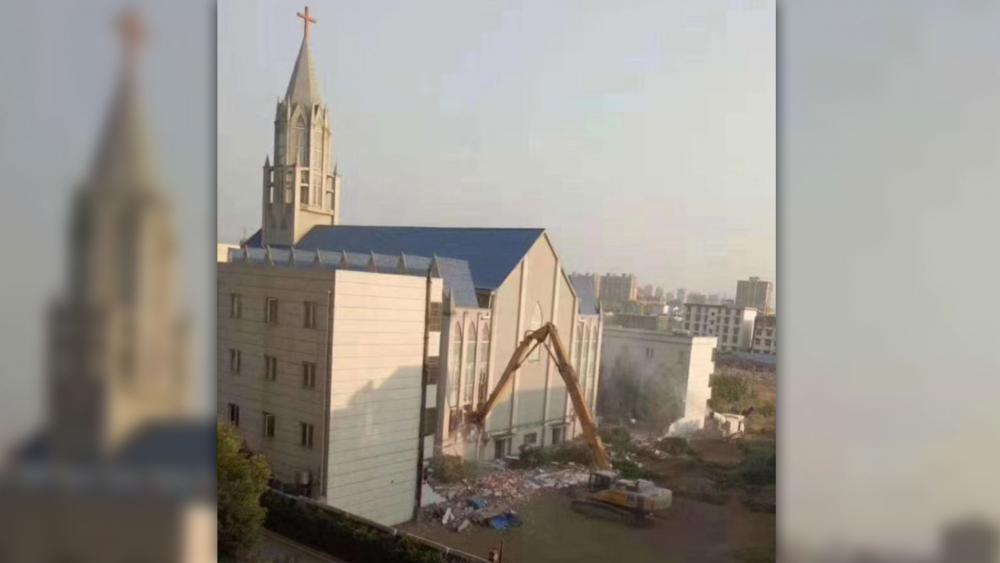 While Communist China moves aggressively to spread its influence throughout the Pacific region and around the world, the government is expanding a crackdown against people of faith at home.

In its effort to assure that all its citizens comply with the edicts and beliefs of the state, the Chinese Communist Party is targeting Christians for persecution and ethnic Muslims for genocide.

On February 1, 2021, China’s Public Security Bureau (PSB) police stormed onto the property of a government-sanctioned church in China’s Wenzhou City. Their mission? Toppling a cross from the roof of a church building for a second time. They had removed the cross seven years earlier, but church members replaced it.

Bob Fu is the Founder and Director of China Aid, a Midland, Texas-based group that helps China’s persecuted Christians.

“In that city alone we have documented over 1,600 churches where their crosses were being burnt, destroyed, and destructed. And many pastors you know were even detained, imprisoned,” he said.

China’s Christians say it is the worst persecution against them since Chairman Mao Zedong.

And it’s no longer limited to certain regions of China.

“What we say in 2021 is that everywhere in China there is intense persecution of Christians. There are intense efforts to control the church, to bring the church under Communist Party control,” he explained.

And Fu said the CCP has a new excuse for targeting Christians.

“Now under this pretext of Covid-19 coronavirus, the Chinese Communist Party has intensified its persecution by banning all the church activities – even those worship services, prayer meetings in believer’s own homes with their own family members.”

On July 22, 2020, a Christian woman heard a loud knock on the door of her home in China’s Xiamen City.
She refused to allow police to enter her home without a permit.

Moments later, they destroyed the lock and entered anyway, breaking up what the government said was an “illegal” meeting.

Fu said it was another example of President Xi Jing Ping’s campaign of Sinicization, which means Christians are only considered to be good citizens if they adhere to communist ideology.

“Ironically, Xi Jinping’s portrait was even put on the church pulpit along with Chairman Mao and the first line item of worship by the government-sanctioned church before Covid-19 was to sing the Communist Party National Anthem,” Fu explained.

And examples go beyond churches.

In Fuzhou City, a Catholic family was forced out of their government-subsidized housing after they refused to remove religious icons from their home.

Meanwhile, Christians aren’t the only ones suffering.

Ethnic Uyghurs from East Turkistan – a region the Chinese government calls Xinjiang are under attack.

When he served as US Secretary of State, Mike Pompeo described Uyghur suffering as “one of the worst human rights crises of our time… truly the stain of the century.”

One day before he left his post at the State Department, Pompeo officially announced that China was committing genocide against the Uyghurs and Turkic people.

For years, the Chinese government has forced Uyghur women to undergo abortions and forced sterilizations.
Twitter recently locked the account of the Chinese Embassy in Washington, D.C. for tweeting that Uyghur women
have been emancipated from being quote “baby-making machines.”

The US Department of Defense says as many as 3-million Uyghurs are being forcibly detained in re-education and forced labor camps.

Appearing on the CBN News Channel program The Global Lane, Prime Minister of East Turkistan’s government-in-exile Salih Hudayar said China is using the camps as a place to brainwash Uyghurs and harvest their organs for profit. And he said detainees are being used as slave labor.

“Millions are still you know, working in slave labor factories producing products you know for companies like Apple, Nike, Costco, and dozens of others,” insisted Hudayar.

And Uyghurs are reportedly being used to manufacture solar panels for export to the US and elsewhere.
The Chinese government calls it a “poverty reduction” effort.

The US Department of State is alerting corporate CEOs and others about China’s use of Uyghur slave labor so they won’t become involved.

Meanwhile, despite the suffering, Bob Fu is expressing optimism about the country’s spiritual future. He says when the CCP seized government control in 1947, only about one million people in China claimed to be Christian. But today – after 70-years of unrelenting persecution – their numbers have grown to as many as 130-million.

Fu sees a glimmer of hope in the suffering.

“So, I think at the end of the day maybe we should call President Xi Jin Ping as God’s you know, faithful servant to revive His church.”