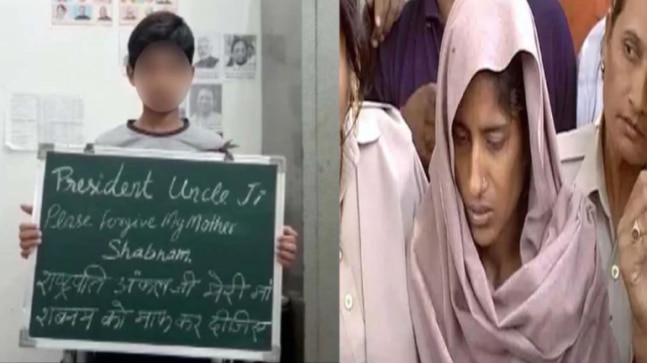 Following the confirmation of the death sentence to Shabnam, the first woman to be hanged in independent India, her 12-year-old son Taj Mohammed has again appealed to the President of India, seeking clemency for his mother.

Shabnam had been convicted of killing seven members of her family after sedating them in April 2008.

Taj Mohammed, who was separated from his mother after she was sent to jail, has lived in a children’s home since then but misses his mother, who is to be hanged later this month at the Mathura district jail.

Please forgive my mother: Shabnam’s son’s appeal to the President

In a plea written with chalk on a board, Taj has requested the President to consider his mother’s case once more time and pardon her life.

The appeal by Shabnam`s son has come at a time when the death warrant for executing her at the Mathura Jail is due to be signed anytime. In his appeal to the President, Taz has urged him to pardon his mother`s heinous crime.

At the same time, Shabnam has also filed a fresh mercy petition before UP Governor Anandiben Patel. Her mercy petition came while preparations are underway at the Mathura Jail to execute her.

Shabnam’s mercy petition has already been rejected by the Governor and President and is likely to be hanged soon after a death warrant is issued. Shabnam is presently lodged in Rampur district jail while Salim is lodged in Agra prison.

When a woman was almost hanged in Mathura jail

There has never been such a situation that a woman has been hanged at the district Jail of Mathura which was built in 1870. Shabnam, who was convicted along with her lover Salim of murdering her seven family members in 2008, is likely to become the first woman to be hanged in Independent India.

On 6th April 1998, a woman named Ramshri was to be hanged at the Mathura district jail, but she gave birth to a child in prison, so her death sentence of commuted to life imprisonment on humanitarian grounds.

According to the information available with India Today, District Judge Amroha Surendra Singh has asked for the final report on Shabnam’s appeals by 23rd February from the District Government Counsel Mahavir Singh. The ‘Death Warrant’ will only be issued after the final report is submitted by the DGC. If any appeal is pending, that appeal will be decided on.

DGC Mahavir Singh told India Today that he is collecting information about all the appeals filed by Shabnam and her lawyer Arshad Ansari is representing her.

Deputy Inspector General (Prisons) Akhilesh Kumar told India Today that they have not received any information about Shabnam’s imminent hanging till date, but the Mathura district jail superintendent Shailesh Kumar has been asked to start preparations for the hanging.

Preparations are already underway and the hanging, whenever it takes place, is expected to proceed without a hitch. The hangman Pawan of Meerut has already visited the Mathura jail. The order for the special hangman’s rope has been placed and the platform and lever are being repaired for the hanging.

Shabnam and her boyfriend Salim’s sentencing

The death sentence to Shabnam and her boyfriend Salim had been pronounced on 16th August 2012 by the then District Judge Amroha for murdering 7 members of her household and although the couple challenged the death sentence several times in upper courts, the sentence was upheld and even the President of India rejected their mercy petitions.

‘Mercy is expected at the end’

To understand what happens in a jail and the psychology of a prisoner, India Today spoke to a man who had spent nearly 19 years in jail. Sharing his experience with India Today, 58-year-old Raman Lal said that he had spent a long time in the Jail. The jail has a normal routine for prisoners and he has leaved every single day with a hope to release, said the former prisoner.

He also said that the hanging house is at the right corner of the jail and had seen and worked in that compound during his imprisonment. Talking about Shabnam’s death sentence, Raman Lal said it is upto to the President but “mercy is something which is always expected at the end”.

Also Read | Shabnam, who axed kin to death for lover, likely to be first woman hanged in independent India