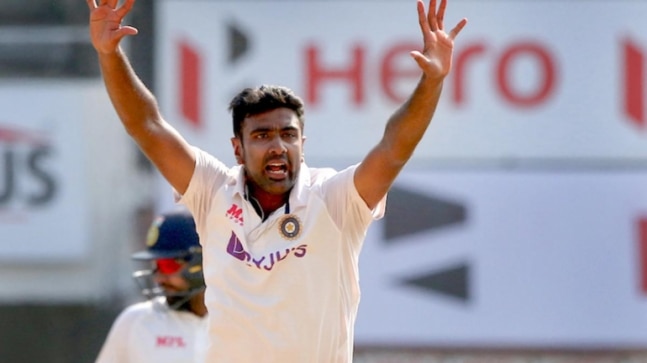 Ravichandran Ashwin said he has not heard England complain about the nature of pitch on offer in Chennai for the 2nd Test but said the cricket world needs to set the “same benchmarks” when discussing spin and seam-friendly pitches.

R Ashwin‘s comments came after several former cricketers, including Mark Waugh and Michael Vaughan, slammed the Chennai pitch, calling it “unacceptable at Test match level”. There were cricketers and pundits who defended the pitch as well but there was more criticism, especially from England as the MA Chidambaram Stadium pitch started assisting spinners from Day 1.

India won the toss and posted 329 runs as Rohit Sharma and Ajinkya Rahane stiched a 162-run stand, nullifying the spin threat from England when they were in the middle. Rohit looked in complete control as he used his foot well and swept with single-mindedness during his classy knock of 161. However, England crumbled to 134 as R Ashwin and Axar Patel shared 7 wickets between them.

Wicketkeeper Ben Foakes was the only England batsman who looked relatively comfortable against spin as the visitors struggled to handle Ashwin and Axar on the spin-friendly Chepauk pitch.

“When it comes to spin, unfortunately, people don’t expect… they want conditions in their favour, driving, cutting everything needs to happen. But when it comes to a seaming wicket, you can’t do all those when you start in the morning. I think the same kind of benchmarks need to be set when you play spin on a challenging pitch as well,” Ashwin told reporters after India ended Day 2 with a 249-run lead in their bank.

“I don’t know if they have complaints. If they do, it’s quite natural for people to come up against adverse conditions and then be taken aback by it. In all honesty, in the 7 days of Test cricket we have played s far, England have played really well, competed really well,” he added.

“But time and again, there are conditions which will challenge you, be it spin or be it seam.

“The only comparison I would say is if the ball is moving around in 140-150 clicks off the deck, that has to be more challenging than someone bowling at 85 or 90 kph when the ball is spinning. Clearly, the challenges are way greater when you come up against seam. It’s just the same way when you play spin, you have to give it to the bowler, play time and then look to score runs. It’s another form of art, that’s it. As simple as that.”

The toss was more important to win in the 1st test than this one, as it did nothing the 1st 2 days. Then exploded. This one has been a turner from ball one. Eng should’ve bowled India out for 220. No different between spinning or seaming & Rohit showed how to play on this surface https://t.co/xg1gPDetRs

Ashwin picked up his 29th 5-wicket haul as he went level with pace great Glenn McGrath on the list of bowlers with the most 5-wicket hauls in Tes matches.