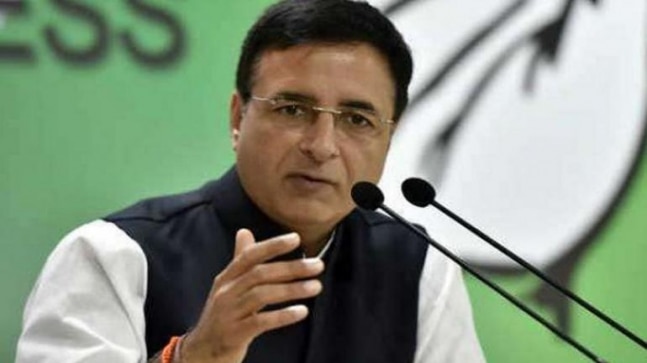 The Congress questioned Defence Minister Rajnath Singh’s statement on the disengagement exercise between Indian and Chinese troops on the LAC and accused the government of “compromising national security and India’s territorial integrity”.

Rajnath Singh, in Parliament, had said India and China have reached an agreement on disengagement in the north and south bank of Pangong lake in eastern Ladakh that mandates both sides to cease forward deployment of troops in a “phased, coordinated and verifiable” manner.

Reacting to this, Congress chief spokesperson and general secretary Randeep Surjewala alleged the government was “disengaging its troops in Ladakh without giving an assurance as to when would there be status quo ante as on April 2020 when unprovoked Chinese incursions into India’s territory and military build-up started”.

“Defence Minister, on the other hand, seeks to mislead and misinform, without giving full assurance on Chinese withdrawal from India’s territory in aforementioned areas,” Surjewala further alleged.

The Congress listed out 8 questions for the government on India-China border tension and Rajnath Singh’s statement on the matter:

1. Modi government and Defence Minister, Shri Rajnath Singh refuse to give an unequivocal assurance for restoration of ‘Status Quo Ante’ as on April, 2020 by the Chinese i.e. the date and month when unprovoked Chinese incursions into our territory and military build-up started. Can the Prime Minister and Defence Minister explain their complete and total failure in protecting India’s territorial integrity?”

2. Modi government has always maintained that there has to be ‘complete disengagement and withdrawal of troops by the Chinese in entire Ladakh area’. Why is Modi government then agreeing to a selective disengagement only in Pangong Tso Lake Area and that also by presumably changing the LAC to India’s disadvantage?

3.Even in Pangong Tso Lake Area, India was occupying Finger 4 and was patrolling upto Finger 8 on the North Bank. India’s stance has been clear and unequivocal – LAC is upto Finger 8. As per Defence Minister’s statement, Indian troops will withdraw now to Finger 3. Does it not tantamount to redrawing the LAC to India’s disadvantage and creating a buffer zone between Finger 3 and Finger 8, i.e., on our side of the LAC? Is this not a blatant compromise on India’s territorial integrity?

4. Our forces had shown extraordinary courage and valour in face of the Chinese aggression and had occupied the vantage points on ‘Kailash Ranges’ on the Southern Bank of Pangong Tso Lake Area. Defence Minister’s statement today would mean that our Armed Forces will be withdrawing from these vantage points in Kailash Ranges on the Southern Bank. Will the Prime Minister and Defence Minister explain as to why is Modi Government agreeing to withdraw Indian Armed Forces from dominant positions in Kailash Ranges where the Chinese are at a disadvantage, without any quid pro quo by China? Does it not compromise National Security?

5. One of the most strategic and provocative incursions into the Indian territory by Chinese is in ‘Depsang Plains’. Chinese have occupied our territory 18 kilometres inside the LAC upto Y-Junction (bottleneck) and are stopping our Armed Forces from patrolling upto the PP-10, PP-11, PP-11A, PP-12 and PP-13. This has also jeopardized one of the most important and strategically placed Air Strips i.e. DBO Air Strip (DBO-Daulat Beg Oldi).

Even in the year 2013, China had intruded upto the Y-Junction and there was nearly a six months long stand off between Indian and Chinese Forces. The then UPA-Congress Government and our Armed Forces successfully pushed the Chinese back to LAC at that point of time without ceding any territory.

Why is Modi Government not mentioning a word of pushing the Chinese back to original position on LAC and removing Chinese incursions upto Y-Junction in Depsang Plains? Can such brazen incursion into our territory by the Chinese be tolerated?

6. Chinese aggression and incursions have continued in ‘Gogra-Hot Springs’. Why are the PM and Defence Minister completely mum on pushing the Chinese back from Gogra-Hot Springs?

7. As per reports, Chinese are also patrolling upto Chumur in Southern Ladakh. Why are the PM and Defence Minister not addressing this important strategic issue at all?

8. A senior Minister, Gen V.K. Singh undermined India’s position by making statement contrary to National Interests and giving a handle to China to unjustifiably paint India as the aggressor. Why are PM and Defence Minister absolutely mum on this unpardonable compromise of India’s National Security by a sitting minister? Why has Mr. V.K. Singh not been sacked for undermining India’s strategic position? Does the PM and Defence Minister’s silence indicate that the statement was made by Shri V.K. Singh at the behest of the Modi Government? If so, what is the reason for this brazen compromise of India’s National Security?

“India demands answers to the above questions of blatant, brazen and unpardonable compromise of our national security and territorial integrity by Modi government,” the Congress said in its statement.